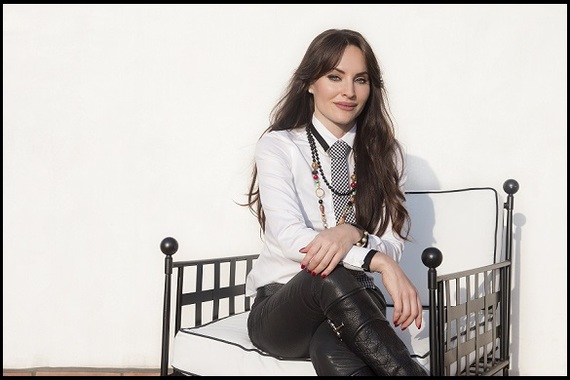 Brooke Mason takes riveting photos which literally pierce right through me. She somehow gets her subjects eyes to sparkle, every time.

But that's just on the outside. Once you delve into Brooke's work, you'll find that she's crafted intriguing stories through the use of photographs.

(The above being said, if you've read my past articles, you'll have noticed that I can never let an opportunity pass by when there's a connection to my 1980's television show "V" ... so what's the connection with Brooke Mason and "V"? Actress Jane Badler lives in Australia! [It's only far fetched if you don't know me.])

Brooke! You distracted me with the whole Australia thing! By the way, I noticed you like black and white, like me.

Oh. Brooke's had some amazing shows this year that you can Google info on, in case you missed them. Be sure to check out her most recent one called AWAKEN: the female voice.

You grew up in Sydney, Australia and later moved to California. How old were you at the time? Where'd you live? How'd you make ends meet while you were getting settled in the United States?

I left Sydney for NYC when I was 19 and fell in love with the US. While getting my Graduate degree at The Neighborhood Playhouse I made my way working nights as a receptionist at a rehearsal studio. I commuted from Astoria, Queens where I shared a small apartment with several students.

Four years later I made my stop in LA and it was a big culture shock, or should I say "lack of culture" shock. In Los Angeles I modeled, acted, did make-up and hair to make ends meet. I then started a successful dessert business (I love to cook), sold in Whole Foods called Marsha's Tasty Treats; named after my Mother Marsha. In the years I've lived in LA it's been nice to see a progression of culture and art, I'm proud to call LA my home.

How were you introduced to your mentor, art critic and curator, Peter Frank?

I met Peter Frank in Los Angeles in 2013 with my series "La Haute Main". It was the first time I felt that someone actually got what I was doing. He saw past the sexuality that others were gluing onto and was able to see where I'm truly coming from. I love our "tea with light conversation" afternoon chats, though honestly there is nothing light about the talks we get into. He has been an amazing mentor for me with my most recent curatorial debuts.

In your early photography years, you actually developed film in a dark room. What was that process like compared to today's digital world?

I will always have a soft spot for using a film camera, and if it wasn't for this rat wheel paced life, I would still be photographing on film. Even today, I rarely go over thirty frames in one set-up because of habits I developed early on. Back in my film days I was experimenting with retouching and composting imagery through different creative ways of exposing film onto photo paper. It was an exciting time!

One bonus about working digital is I never have days where a roll won't develop. You know what's happening as you shoot. There's a positive and "negative" to both. Hah! Please excuse the pun.

Who was your FIRST celebrity shoot? How'd you get that job?

Early on photographing a celebrity is such a boost for a photographer's career, we almost never get paid. My first celebrity I photographed is my good friend Ken Davitian (most famous for the film Borat). I asked him to pose for me as King Henry VIII and as Marquis de Sade. I still chuckle at the shoot... it's on my website.

What drew you to the female body for your photography?

In my commercial life I photograph about 50/50 men and women, but as a fine art photographer I'm currently interested in expressing the female form in her most beautiful and powerful way. The men are often used as a part of the story and not the main attraction. As a feminist I highlight struggles and sexism, often tell personal stories from my own life experiences. I'm not drawn to photographing landscapes or objects because they don't feed my sociological concerns.

Did you ever take photography courses or are you self-taught?

I'm a self-taught photographer. My art is about telling stories. Although I believe in always learning my main objective to telling these stories through my work and not getting caught up in the technicalities.

What hobbies do you have?

I'm a bit of a workaholic and I do understand the idea of trying to balance my life although I fail miserably most of the time. When I do take a little time out I'll go to art exhibits, museums and lectures about art. I love taking my large fluffy Barbet to run at the beach, I'm a huge animal lover. Plus I have this crazy addiction to Amy Schumer. [NOTE FROM ILANA - Hey Brooke! I saw Amy Schumer live at Madison Square Garden when she opened for Madonna's last tour! Amy was her usual bit of awesome!]

Where do you shop for clothes / shoes?

Now you're talking my language! I love to find a bargain. I will scout designer second stores for finds and sometimes you just have to bite the bullet and pay full price on some "must have" designer item. I believe it's important to feel proud in what you're wearing, it's your statement to the world.

What do you think about as you're falling asleep?

I usually try not to think before I go to sleep... that's really my biggest challenge. But I do keep a note pad next to my bed and before a shoot day I will start thinking about compositions and how they tell my story. So I draw these silly stick figures of where the models will be and I'll bring that to set with me. Of course, no one can translate it but me.

I'm a core team member of an amazing empowering group called Women Manifest. We put on some incredible events for Women's History Month in March in West Hollywood and the greater Los Angeles Area. We have some other events coming up throughout the year.