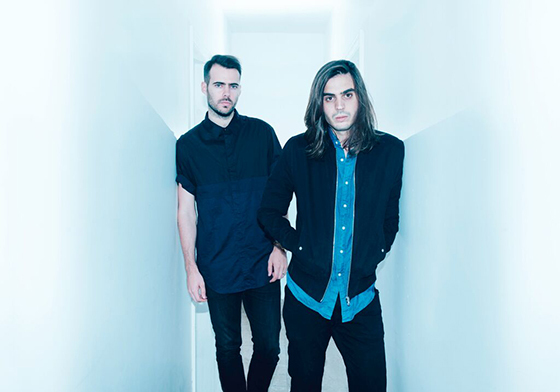 The Brooklyn-based electronic music duo Beacon is back with a new album titled Escapements, to be released on February 5th via Ghostly International. The new album tackles more of a higher tempo than their previous works but continues to tap into that dark, yet soulful sound that has always been embedded in their music. It's as much as moody R&B as it has a trip-hop feel mixed with dance floor energy.

Recently, I was able to chat with Thomas Mullarney III and Jacob Gossett of Beacon before they hit the road for their upcoming tour with electronic producer Natasha Kmeto, and we talked about the new album and how it translated to their live show, and how they met.

When you were going into making this album, what was the thought process of what you wanted to do?

Jacob: We had toured quite a bit off the last EP and LP, so we wanted to go into the studio with making a more kind of record that lend itself to performing. There's a lot of more uptempo tracks on this record I think then previous releases of ours. Some more dance inspired cuts on the record for sure.

Thomas: Our creative process in not all that planned out or organized even, its really fluid. A lot of our best ideas come out of just these entrancing jams that we do where we just not even talking to each other, but two hours later have something that we kind of like that turns into an idea. We don't ever have a concrete goal when we go into these sessions.

How will this new record translate to the live show?

Thomas: It already has in a way. We've developed a new live show. The technology behind is based around getting these songs the best versions of themselves. The best kind of iterations and the best platform to perform them, so they definitely influence how we set up this upcoming tour for sure.

Jacob: We invested in a lot of new gear for this tour so its like new ground all around. Just a bunch of new elements we're bringing out on this tour that we're super excited to share.

How did you guys first get together to form Beacon?

Thomas: We met at the first day of classes in art school Pratt Institute in Brooklyn.

Jacob: We were working on stuff collaboratively through school, but slowly started working on music over those four years, then upon graduating, started performing live around the city, around Brooklyn, and started recording material around that time as well.

Jacob: For us, it was such an ideal situation. Coming out of an art school setting, coming from a certain visual place with the project as well, it just fit really well under the Ghostly umbrella. The label honestly cares about the visual ascetics of the music. It fit really well for us. It was a name we were hoping to link up at some point early on, felt very fortunate.

Beacon will play the Majestic Cafe in Detroit on February 5th with electronic producer Natasha Kmeto. For more information on Beacon, visit beaconband.nyc.