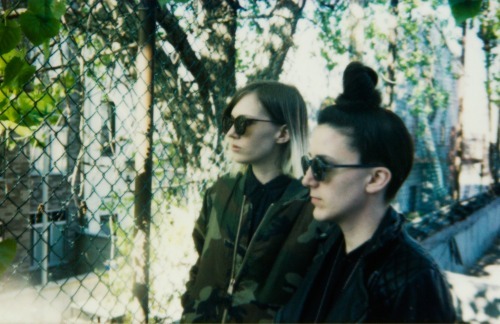 CREEP is the lush brainchild of Detroit born electronic music DJ/producer Lauren Flax, who now calls New York her home, along with fellow Brooklynite Lauren Dillard. There is an emotive essence with CREEP that lends its ghostly sound to the psychedelia of trip-hop and techno as much as it touches on the bounce and the soul of hip-hop and R&B. It's a project that's a creative vessel for Flax and Dillard to challenge the artistic boundaries of dance music and appropriate it into both an audio and visual experience. The music of CREEP is sexy and powerful, while still showing an emotional and vulnerable side. It's not a dream nor a nightmare, but just a feeling to absorb.

With their debut album Echoes, its highly cinematic with songs posing as scenes and the guest features acting as characters as they tell their own stories over the moody and at times harrowing backdrop from CREEP. Starting from "Introduction" to the album's finale "Dim The Lights", Echoes rides the melodramatic waves easily letting the listener paint visuals in their own mind. Recently, I was able to get Lauren Flax and Lauren Dillard to answer a few questions about how CREEP started and their general aesthetics of the project.

How did CREEP originally come about?
Lauren Flax: It was a fun side project we started. I know for me it was more about breaking down the barriers and conformities of dance music. I felt boxed in, and this was sort of my escape from all of that.
Lauren Dillard: "Days" was the first ever CREEP song. It was a song that I had started on Logic and asked Flax what she thought. She liked it and we wrote throughout the night, just on my computer, using laptop speakers [laughs]. We played the track to some friends who all had a positive response, and eventually had Romy [Madley-Croft of The XX] sing on it, which sealed the deal. We felt like we were onto something so kept on writing!

With the guest appearances on the album, they more or less compliment the mood of the music, rather than just placing someone on the track. How did you go about making such synergistic choices for whom to feature on Echoes?
LF: Almost everyone on the record are friends of ours so the choices really came with ease. There was also no pressure from us onto them so I think that may have been refreshing. If it didn't work out, there were no hard feelings. For the most part though, everyone came through pretty easily.
LD: It all happened pretty organically. We try to not force anything and our collaborations come about quite naturally for the most part.

The name of the album Echoes very much goes with the lush, haunting sound of CREEP. Speak more about the progression of the group's sound.
LF: It's a constant progression, such is life. I know we have both matured a lot as producers within the making of this record, but I know I have so much to learn. For me, music feels very bright in those terms; constant growth.
LD: This was my first record so it was definitely a learning experience, musically and otherwise. As we grow and learn about different production techniques, attach ourselves to different types of sounds, the music changes as well. It is all an evolution.

The sound of CREEP lends itself as much to techno, as it does to everything from hip-hop, trip-hop, and just dark eerie vibes. Where did the inspirations come from when building the sound we now here on the album?
LF: Honestly, I have always made sad, dark music. Any remix I've done, I've managed to extract any sort of happiness out of it [laughs]. The inspirations come from all around, from the weather that day to the people I surround myself with. It isn't necessarily music that inspires me.
LD: I am just as much into mainstream R&B and hip-hop as I am into bands like Throbbing Gristle, DNA, or Gang Gang Dance. So the inspiration on a musical level comes from all over the map. I am heavily inspired by art and film just as much as by music, if not more so. Coming from a film background (I majored in film in college and started writing music when scoring my own/other peoples films), I am really interested in how sound can be used to narrate a story just as much as words or imagery.

Are the concepts of the tracks all your ideas or did you work with the featured guests to kind of vibe about what the track is about? What is the songwriting process like?
LF: We do 100% of the music and we give the vocalists 100% creative control over what they want to do lyrically. We both enjoy hearing the kind of stories our music evokes in others. As for how we write together, it's always changing. I'll usually start songs and we will pass it back and forth until we finish it. We work together as well, especially on the road.
LD: We have recorded our guest's vocals in the studio in Brooklyn, in Lauren's bedroom, and sometimes we haven't even been in the same room as artists when they record! It all depends on the song and where we are in the world. Basically, there is no real formula we follow in our songwriting process, it is different every time.

With guests like Tricky and Romy of The XX, they are almost like bookends of the past and present of a certain sort of music that ultimately lends to the mood of CREEP. How does Creep kind of fit into that vibe of darker atmospheric music?
LF: I'm not really sure. I don't really think about fitting into a certain sound, I just try to stay focused on being true to ourselves in this complicated business.
LD: We don't consciously set out to write dark music, it is just kinda what comes out. It's funny, I have tried to write happy songs before and they still turn out dark and gloomy! Go figure!

From what I see, you released Echoes by yourselves and there has continued to be a great buzz for the past couple years. How did you go about building that buzz for CREEP?
LF: We toured some and continued to remix people, along with releasing singles as well as videos here and there. We didn't really release much in 2012 though because we were trying to wrap up the record. I'm pretty thankful we held on to our fans, because this record came out a year later than planned.
LD: Post-release we are planning on doing some more touring as well. I'm really happy that we seem to be getting some positive response from the record. We have a couple new videos in the works as well. I'm excited to be able to show some more of how our imagery has progressed throughout the past couple years.

From pictures I've seen, the CREEP live show is an audio and visual experience. Speak about what goes into the live show and what you are trying to achieve on stage.
LF: We definitely add in as many elements as possible. We have 14 singers on our record so naturally, we won't be able to tour with pretty much most of them. We use visuals as our lead singer, this way we can virtually tour with everyone on the record.
LD: The live show has been a real challenge and is always a work in progress. As of right now, our set up is Flax on drum machine and guitar, I play synth, and we have a live bassist and drummer. I collaborate with visual artists to create our videos which we project behind us on stage (our lead singer).

Lauren Flax, you are originally from Detroit. How long have you been in New York? After your time in Detroit, what is it about New York that attracted you to it and does it inspire you in any way?
LF: I left Detroit in '99 and moved to Chicago. I loved it there but really craved more so I moved to NYC in 2002. I hit the ground running. Brooklyn is home and I don't see myself leaving any time soon, but Detroit definitely shaped the person I am today. I still have family there and go back when I can. It's funny how much I haven't seen. Now when I visit, I'm definitely a tourist. Can't believe some of the places I've never seen! Detroit and Brooklyn feel very similar in terms of energy and creativity. I thrive on it.