WUHUA COUNTY, China -- Li Hongjun is an unlikely hero for U.S.-China relations. Before a stolen iPhone, a chance selfie and a viral Buzzfeed story turned him into “Brother Orange” -- overnight celebrity and perma-smiling avatar of international goodwill -- he’d never made friends with anyone who wasn’t Chinese. Today, he’s fending off advertisers and screenwriters on both sides of the Pacific who want to put his face on screens and bottles of skin lotion.

If you have no idea what the above paragraph is about, check out the entire mind-bending saga by Matt Stopera, deputy editorial director at Buzzfeed. If you're in a rush, here's the condensed version:

Throughout that whirlwind, we saw Brother Orange bro-ing out with Stopera, planting trees for U.S.-China friendship and eating string cheese for the first time. He seemed friendly, goofy and down to earth.

But who is Brother Orange?

He’s a serial entrepreneur, a middle school dropout and a self-conscious celebrity. He’s proud of his hometown culture, terrified of flying and unsure about what to do with the pile of fame that’s been dumped in his lap.

The past three months have in many ways turned his life upside down, but he’s stayed grounded by surrounding himself with family and friends -- many of whom have known him since he was just a boy growing up in one of the poorest counties in southern China. 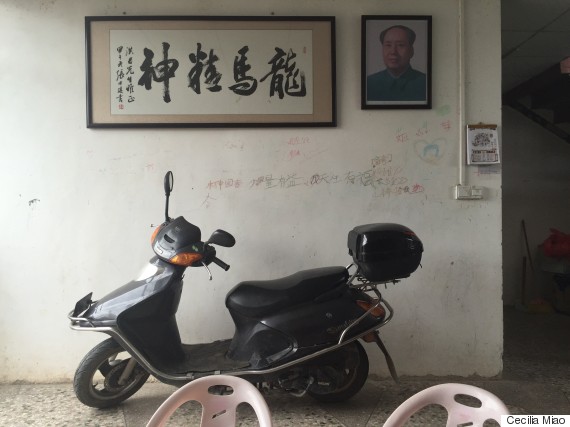 A motorbike below a portrait of Chairman Mao in Li’s living quarters.

Li Hongjun was born in 1976, just around the time China was transitioning away from intense reverence for Chairman Mao Zedong and toward frantic economic growth and consumerism. He grew up in the lush countryside of Guangdong province, where his father supported the family by selling cigarettes, tea leaves and alcohol in his own small shop.

After dropping out of middle school, Li left home at the age of 15 to look for work in the coastal boom town of Shenzhen. Back in 1991, that 200-mile bus ride over dilapidated country roads took 12 hours, but Li wasn’t bored for a minute.

“Back then I was so young and everything was just so mysterious to me,” he told The WorldPost. “It was the first time I’d ever been that far from home, and I was so curious that I didn’t want to go to sleep.”

Over the next 20 years, he moved between coastal cities, selling plastic sunglasses, household goods and cheap clothing. It was in those cities that he and his wife had three of their four children, most of whom are now in elementary school. He eventually poured the family savings into starting a small metalworking factory, but he couldn’t get it to turn a real profit. In 2011, the family moved back home to be closer to Li's ailing parents. 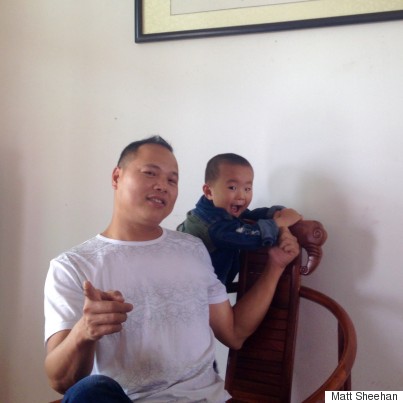 Li with his youngest son at his restaurant.

When Li and his family arrived back in Wuhua County, the local per capita GDP of $1,249 made it the poorest county in Guangdong. Over the next two years, both of Li's parents passed away, and his new business -- a restaurant boat floating on a local river -- was shut down by the government over safety concerns. He and his fellow boat owners petitioned the provincial government for fair compensation, but he says he only got back a fraction of the money he’d invested.

Picking up the pieces, Li crane-lifted his boat into a nearby marsh about a kilometer from where he grew up. There, he spent six months filling in the adjacent land and setting up a new restaurant. He named it Jade Tea.

It was just as this restaurant opened for business that his nephew gave him the iPhone that would change his life. As Li began playing with his new device, a stream of pictures of a white guy unknown to him kept showing up on the phone.

“All the pictures were him eating, drinking and having fun,” Li told The WorldPost. “I thought, ‘How can this guy always be having such a good time?'” 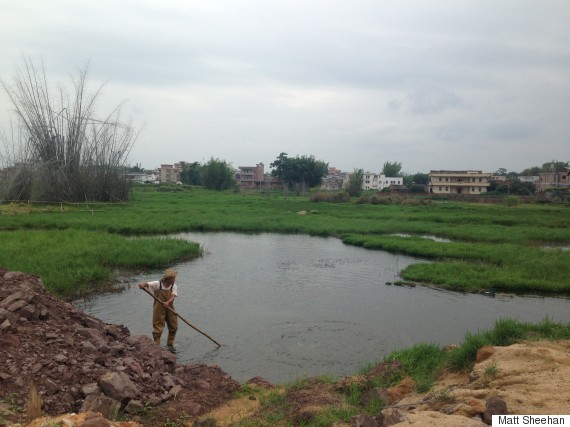 The view from the back porch of Li’s restaurant.

Li didn’t think much of the photos until the day his nephew came and told him that he was the hottest topic on the Chinese Internet, and that thousands of microbloggers were looking for the man they called “Brother Orange.”

His first reaction was fear -- not unreasonably. The Chinese Internet is infamous for what’s been called the “human flesh search engine” -- the eerie way that users can mobilize to identify people glimpsed in photos and videos, and then make their identities public. It’s a tactic often used to name and shame corrupt officials, as well as adulterers, animal abusers and other offenders who aren't public figures. Li hadn't done anything wrong, but there had been many well-publicized cases in China of Internet attention pulling ordinary people's lives inside out.

Eventually convinced no harm would come his way, Li stepped forward and identified himself as Brother Orange. He opened a microblog account that quickly gained more than 100,000 followers. The three months since have been a blur. 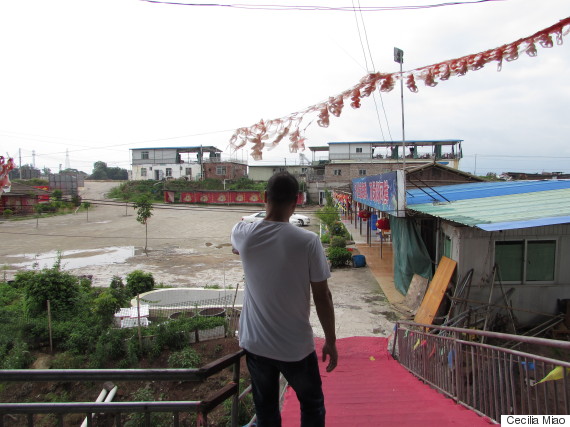 After Stopera’s visit to China, Li left the country for the first time on a grand tour of the U.S. He and Stopera appeared on "The Ellen DeGeneres Show," met Britney Spears in Las Vegas and partied at the Buzzfeed offices in New York. American cuisine got mixed ratings: Eating Chipotle was “torture,” but margaritas (“that Mexican drink”) got a big thumbs-up.

The unlikely pair bonded over life in the eye of a media hurricane, but Li sometimes finds himself squirming under the spotlight. He speaks Mandarin with a thick accent that betrays his rural roots, a fact that one TV host enjoyed needling him about. That struck a nerve, and a week after the taping, he said he was afraid he’d “made a fool of himself” on the show.

“When people are watching you on TV, you want to be lively, fun, relaxed,” Li told The WorldPost. “But what does the audience know about your real life? About all the difficulties you’ve been through?”

He describes himself as fundamentally introverted, and he’s been awed by the way Stopera will just cut loose with Taylor Swift dance moves and Britney Spears solos.

“Matt is always so open, and I really admire him,” said Li. “Whenever he’s out in public, it’s just the same as when he’s at home. He’s never nervous or thinking about how he should act.” 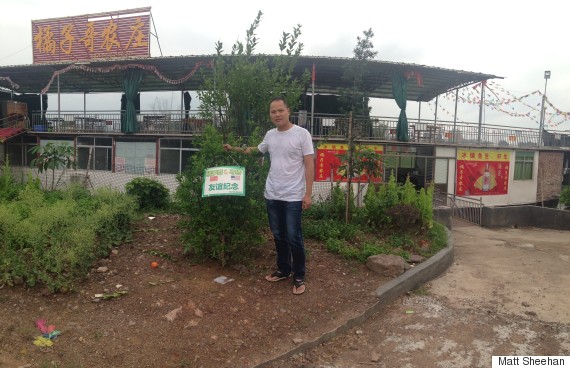 Li standing by the China-U.S. friendship tree that he planted with Stopera.

Viral international bromance makes for marketing gold, and in the last few months Li has been bombarded with phone calls asking him to endorse everything from oranges to skin cream to alcohol. But after getting burned on his last couple of business ventures, he says that he’d rather just focus on fixing up his restaurant for now.

The restaurant sells a local specialty: raw fish eaten with peanuts, peppers and garlic. In recent months, Li's newfound fame and a light-up “Brother Orange” sign have boosted business a bit. Hesitant to work with strangers, he’s recruited a childhood friend to help him fix up the place, starting with improving the electrical connection.

“There’s never enough electricity here,” Li said. “At night, when we turn on the air conditioner, the big lights start flickering on and off.”

He’d like to pave the parking lot, but city planners are mapping out a new highway just a few dozen meters away, and he’s afraid the project will spell curtains for his restaurant.

Those are real concerns, and they'll have to be confronted at some point. But for now, Li is still enjoying his new international lifestyle and the Brother Orange brand.

“I really like the name -- I think it sounds great," said Li. "Now when I think of my original name, I feel like it can’t even compare.”