It is tempting to regard a life that takes place "off the grid" of modern culture -- sans TV, sans cellphone, sans facebook, sans travel -- with pity, as if the person living this way was "left behind" or just doesn't know what he's missing. The temptation to belittle this choice -- especially when it is a choice and not simply the result of poverty and isolation -- is rooted in the suspicion that the trappings of modernity have provided at best illusory improvements on our simpler past. The nagging feeling that what we have lost of the old analog way of life might be of equal or even greater value than what we have gained in our progress towards an evermore technologically complex, global society, never manifests so acutely as when we are presented with people who have "opted out" of the whole business. 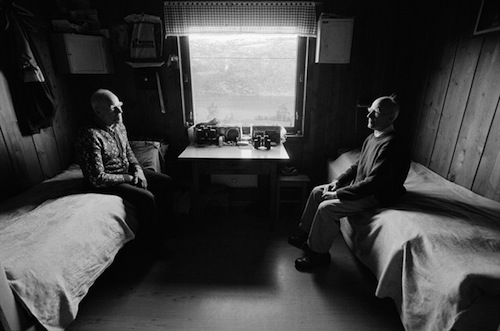 Elin Høyland's exhibit, Brothers, at Rayko Photo Center through October 18th, follows Harald and Mathias Ramen, who lived out their lives on a farm in rural Norway, chopping wood and tending to birds on the farm they were born on. Neither had ever married, only Harald had ever spent the night ("the worst of his life") in another town, and they had only even rented a television for one month in the 1960s before deciding it consumed too much of their time. Høyland follows them on their routines on the farm, trundling through the snow, dressed in the elaborately geometric Norwegian sweaters and cap. Two mud-and-hay-caked mittens hang from wooden clothes clips. The two men make breakfast in a small, immaculate kitchen -- one can tell the same photograph of Harald and Matthias might have been taken forty years before, and looked no different but for the unaccumulated evidence of the succeeding decades on their faces. But more poignant is the fraternity still evident in men at whose age most people have grown apart from their siblings. A strange childlike camaraderie comes through in some images -- the hint of a smile at some inside joke shared by the two as they pose, consciously or unconsciously mimicking each other's posture. One seems frailer than the other, his frame smaller, his chest more sunken. There is the faintest suggestion of protectiveness in the other's bearing, in how his focus always seems divided between what he is doing or looking at, and his more delicate brother. It is a quality usually only evident in photographs of siblings while they are both still children, when their roles have not yet evolved through separation, distance, and the upheavals and reversals of adulthood.

The final, haunting image is of their two empty twin beds, with new blankets and none of their meager possessions on the nightstand in between. No virtual presence remains of the two brothers, but no widows or children either; they had chosen to forego their biological imperative as well as the dross of the modern age. Brothers is at times troubling and even heartbreaking, not for the fate of Harald and Matthias, who seemed content with the spare life they chose, but for the revelation that for all our advancements, life is not something you construct from piles of gadgets, endless networking, and virtual friendships, but build, as Tennessee Williams put it, "in the heart of another human being."