That's why scientists using the Subaru Telescope in Hawaii and the Very Large Telescope in Chile have been astounded to find so many of them in such a small space. According to the Subarau Telescope's official website, scientists used the telescopes to closely examine the NGC 1333 and rho Ophiuchi star clusters and identified an abnormally high number (30 to 40) of the strange stars. Their findings will be published in two papers in the upcoming issue of The Astrophysical Journal.

The most interesting finding was of a free-floating brown dwarf that may be one of the smallest in the known universe. Because it doesn't seem to be orbiting a star, scientists have no idea how it formed.

The small star is only about six times the size of Jupiter, according to scientists. While that's pretty large compared to Earth (Jupiter itself could fit a little over 1,321 Earths), it's nothing in comparison to the sun, which could fit nearly 1.3 million Earths.

From The Subaru Telescope's press release:

The six-Jupiter-mass brown dwarf found in the NGC 1333 cluster is one of the puniest free-floating objects known. "Its mass is comparable to those of giant planets, yet it doesn't circle a star. How it formed is a mystery," said Aleks Scholz of the Dublin Institute for Advanced Studies in Ireland, lead author of the first paper.

Brown dwarfs are notorious for straddling the gas giant planet/star line, due to the fact that they glow brightly from heat formation while they're young, but eventually cool down and end up with atmospheres like some planets.

These findings show that objects not much larger than gas planets may have formed in a similar fashion to stars.

Because of their similarities to gas planets, brown dwarfs have long intrigued scientists. Last month, researchers discovered one dwarf that may have been hosting a violent, massive mega storm, similar to those seen on gas planets in our own solar system.

The Full Map Of New Stars And Their Locations: 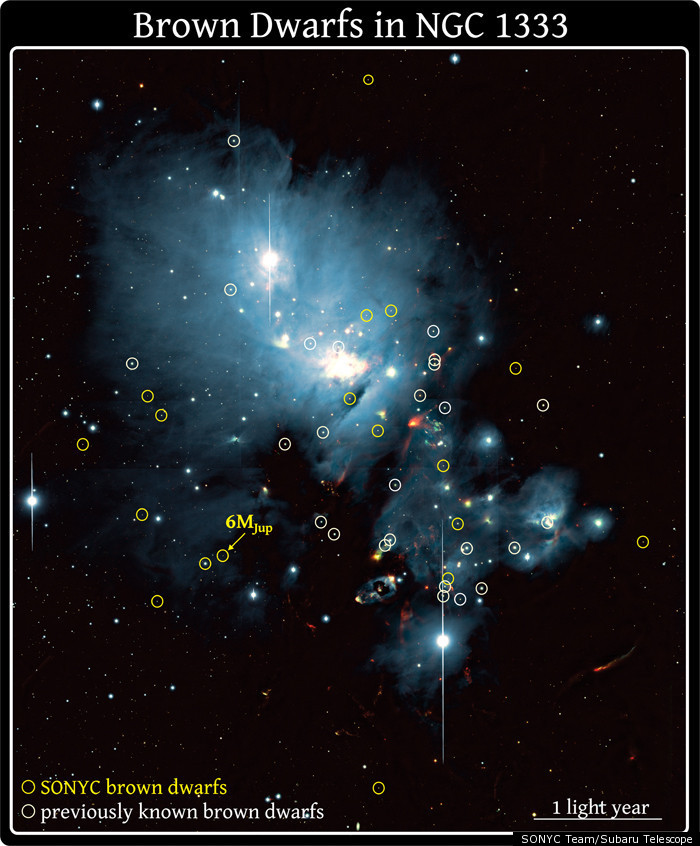