"Brown fat," a type of fatty tissue that burns sugar and fat instead of storing it, is a hot topic among diabetes and obesity researchers racing to find ways to activate its energy-burning properties. But, like other physical traits, it seems that your ethnicity may play a role in how much brown fat you have, and how active it is.

A new study by researchers at the Leiden University Medical Center in the Netherlands compared the brown fat of South Asians, who have an exceptionally high risk for metabolic diseases like obesity and Type 2 diabetes, with the brown fat of Caucasians. They found that South Asians' brown fat stores were smaller and less active than their Caucasian counterparts. Because of this, South Asians burned fewer overall calories, possibly putting them at risk of weight gain and diabetes down the road. The study was recently published in The Lancet Diabetes & Endocrinology journal, and was co-authored by Ph.D. candidate Mariëtte Boon and Patrick Rensen, Ph.D.

The researchers sandwiched each man between two cooling mattresses (cold temperatures are a known activator for brown fat). The mattresses kept getting colder until participants started shivering, and then the mattresses's temperatures were brought up a degree or two -- just enough that the men stopped shivering, but their brown fat was activated and had begun to burn fatty acids and glucose for warmth.

Then they injected the men with a special radioactively labeled glucose, which shows up black on PET scans and is commonly used to locate tumors and other metabolically active tissue. They found that the glucose clung to masses of brown fat located along the neck, shoulders and spine in the participants. Using the PET scans, Boon and her colleagues were able to measure the amount of brown fat in the study participants. They were also able to calculate the men's energy expenditure via indirect calorimetry. The found that South Asian participants not only used 32 percent less energy than the Caucasian group, but their brown fat was also 34 percent smaller in volume. 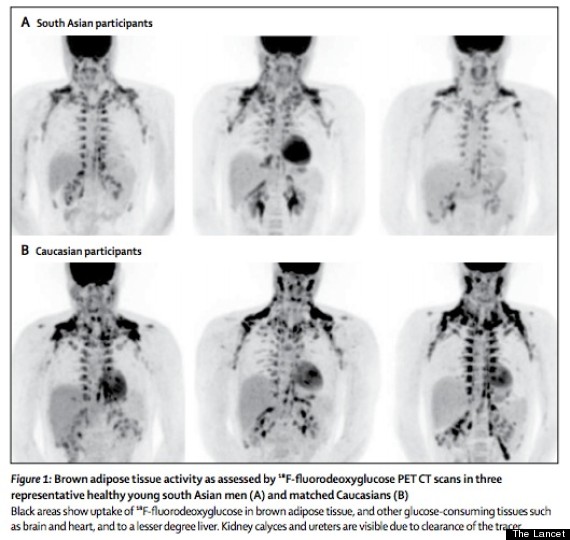 South Asians make up about one-fifth of the world's population, and when it comes to increased risk of Type 2 diabetes, it doesn't matter where South Asians live. Whether they've emigrated to the Netherlands, England or the U.S. or remain in their native India, Pakistan or Bangladesh, their risks remain elevated. Not even the difference between rural and urban living in South Asia can account for the excess risk, explained Boon.

"It really seems like an ethnic susceptibility to Type 2 diabetes," said Boon about South Asians. "It's not just about environmental causes, like diet. Maybe brown adipose tissue [brown fat] is the missing link in this population."

Brown fat was "rediscovered" in 2009, when three independent research groups published findings in The New England Journal of Medicine that showed human beings still hold on to small but powerful amounts of brown fat well into adulthood. Before the studies were published, only babies were thought to have brown fat to help them keep warm because their little muscles weren't developed enough to shiver. Rodents also have a lot of brown fat, so-named for the reddish brown color it has because of the iron in its cells, notes the New York Times. Thanks to pre-clinical trials involving rodents, researchers quickly latched on to the notion that brown fat's amazing calorie-burning abilities could be the key to weight loss and type 2 diabetes treatment -- if they could only find a reliable way to activate it.

"In mice we see that when you activate the brown adipose tissue, it combusts so much energy -- so much glucose and fatty acid -- that you can really normalize Type 2 diabetes," said Boon. "That's why we're so excited about brown fat -- because it seems that in mice, we can completely cure lipidemia (unsafe levels of fat in the blood) and Type 2 diabetes. We are now trying to find efficient methods in humans to activate brown fat."

"I think the elegant thing about brown adipose tissue [as a cure for diabetes] is that you already have it in your body," Boon added. "So potentially you already have the cure -- you just have to activate it."

Dr. George King, M.D., research director at the Joslin Diabetes Center and a professor of Medicine at Harvard Medical School, is less certain about brown fat's role in weight maintenance. While King praised Boon's study for adding to the body of knowledge on brown fat, he isn't sure that the South Asian diabetes rate can be explained by a lack of brown fat.

"Joslin is enthusiastic about brown fat," King told HuffPost. "But is [the lack of brown fat] alone enough to cause all the obesity and diabetes? Our hesitancy is that we don't think it's the sole cause." For instance, said King, even if your brown fat was active and functioning, it burns only an excess of 100 to 200 calories a day.

Of course, optimism about brown fat's potential and realism about what it does aren't contradictory points of view. Fat cell research Dr. Brian Feldman, Ph.D., M.D. told HuffPost that while he's not convinced about brown fat's status as a "major player' in baseline calorie expenditure, he's "very excited" about being able to possibly intervene in its functions and accelerate or exaggerate its calorie-burning abilities.

"I think I'm cautious about, physiologically, the impact that brown fat has on our systems. I'm not convinced it's a major player, just at baseline," Feldman said. "But I'm very excited about the potential to intervene in that. The fact that humans have brown fat and are capable of making these cells -- this could be an avenue to develop novel therapeutic approaches."

Feldman, who specializes in pediatric endocrinology and regenerative medicine at Stanford, recently published a paper in August about how the Vitamin D receptor on a cell can be switched on or off, determining whether an undifferentiated fat cell becomes the white, fat-storing cell or the brown, fat-burning cell. He praised Boon's study for its efforts to address "nature vs. nurture."

"It's trying to control for this nature versus nurture question, although they don't overtly state it. Presumably there is similar nurturing environments, and what we're seeing here is a reflection of the true ethnic and genetic variability. Obviously, its very difficult to completely control for. People still take on characteristics" that have been in their family for generations.

Currently, only cold temperatures have been shown to recruit and activate brown fat cells. And given people's aversion to being uncomfortable (e.g. why some people find it hard to rustle up motivation to exercise), most doctors don't simply advise the obese to hang out in the cold. Boon wouldn't go that far either -- but she did have this to say:

"Turning down the heat in the house could be really beneficial and result in increased activity of brown adipose tissue," said Boon. "It's not bad to be cold."