A task force at Brown University has recommended changes in the way the school handles sexual assault cases, following a steady stream of criticism of the university's sexual misconduct policies over the past year.

The recommendations include a new conflict of interest policy, as well as a suggestion that the school help students involved in sexual assault cases acquire attorneys to represent them on a pro bono basis as a way to mitigate any unfair advantages during campus adjudications. The task force released its final report last week at the Providence, Rhode Island, campus.

"A lot of what we're trying to do does boil down to levels of trust, I can acknowledge that," Russell Carey, executive vice president for planning and policy at Brown, told The Huffington Post.

Brown is currently under a federal civil rights investigation for how it handles sexual assaults. Students at the university protested in recent months after Brown dropped charges against a student who was accused of slipping a date rape drug into a woman's drink at a party. The accused student's father sits on the school's governing board. In that case, Brown also outsourced the toxicology testing to a lab that botched the results.

William McCormick III, a former student, also accused the school in a lawsuit of denying him due process and pressuring him out of school after he was accused of sexual assault by the daughter of a wealthy donor. The case was settled out of court.

The university has always said that is not unfairly influenced in sexual misconduct cases. It did so again last month, prior to the task force's final report.

"Recent suggestions of a 'thumb on the scale' of justice because one student, whose name has been circulated on campus although not in the press, is the son of a trustee are completely false," Brown President Christina Paxson wrote on March 19. "There is no evidence whatsoever that anyone improperly influenced the investigation or adjudication process. I would not allow that to occur. The members of Brown's governing body are aware of this and know that it would not be tolerated."

Nevertheless, the task force recommended several steps that appear to be in direct response to the circumstances of several sexual assault cases.

"There's better clarity around our conflict of interest policy now, ensuring cases of sexual violence adjudication aren't being influenced by who a student knows or who a student is related to," said Katie Byron, a student member of the task force. 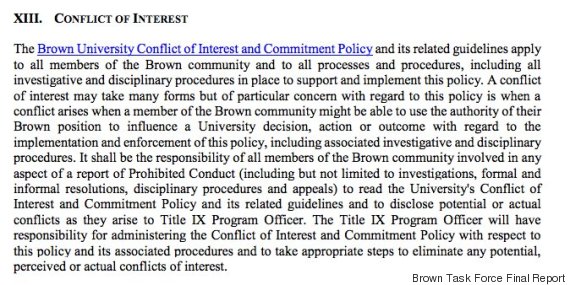 The task force recommended establishing "standard protocols and practices" for any future toxicology exams. Byron said this suggestion was a result of the date rape drugging case.

The recommendations also ask the university to look for evidence of other similar conduct by a student who is accused of sexual assault, which comes after a Huffington Post investigation found one student wasn't expelled until a third alleged male victim came forward.

Brown launched the task force in spring 2014, following demonstrations on campus over the handling of Lena Sclove's sexual assault case, which prompted the government investigation. In Sclove's case, the university found her alleged assailant, whose father is a donor, responsible for sexual assault and physical harm. The university reduced the initial recommendation of a two-year suspension down to one year.

Under the task force's recommendations, if a "decision-maker wishes to modify the recommended sanction he or she will meet with the hearing panel members before doing so." The task force said students found guilty of assault should also no longer be able to count the semester in which a hearing is held toward a two-semester suspension, as was the case with Sclove's alleged assailant.

Carey said that in practice, the school has already been recommending attorneys for students in sexual misconduct cases to level the playing field with wealthier students. Making that a policy is "not hard to do, and is the right thing to do," Carey said.

Emily Schell, a Brown student activist, applauded the incorporation of pro bono lawyers to "address differences in class," but said she still worries about potential bias by administrators -- even if it's not "malevolent."

While students who spoke with HuffPost said there are still ares where they have questions, many were satisfied overall with the document.

"My general impression is that we're finally getting somewhere," said Alice Hamblett, a sophomore at Brown.

The university recently hired its first Title IX coordinator, and the task force recommended centralizing processes and services for sexual violence within that office. It also urged the school to move toward a single investigator model for sexual assault cases, and appoint a standing advisory committee of faculty, staff and students to review progress on these issues every three years.

Carey said he anticipates that the university may expand on its reports of sexual misconduct adjudication outcomes, noting how Yale University discloses detailed semiannual reports.

"They've done great things, and they're good model for us and other institutions," Carey said of Yale. Providing similar annual reporting with "transparency and context are critically important" for Brown, he added.

The task force recommendations still need final approval from top administrators at Brown, and Paxson has until the end of the semester to issue a formal response. 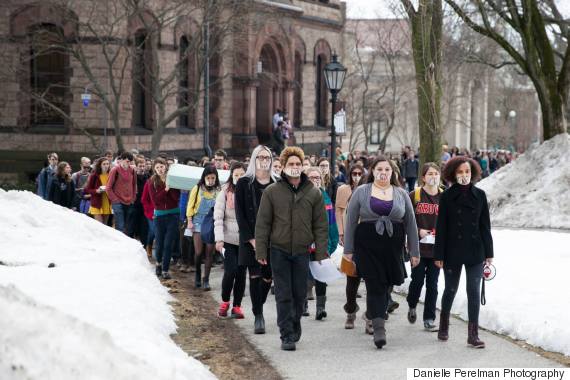