A Statement from a Collective of Delegates attending the 2015 Latinx Ivy League Conference at
Brown University
November 16, 2015
Providence, Rhode Island 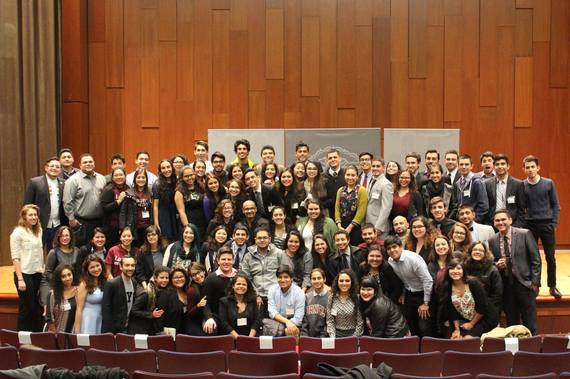 Photo credits to Taylor Michael, photographer at Brown Center for Students of Color

On Saturday 11/14, a senior delegate at the Latinx Ivy League Conference from Dartmouth College was a victim of excessive force by Brown's Department of Public Safety. The following is his story in his own words:

"There was a party at Machado house last night. I was waiting to pay the price of admission along with two other female Brown students. I was completely sober on all accounts. A drunk Brown student stumbled out of the party and was immediately confronted by the officers working security, and when I saw what I perceived to be inappropriate touching on the part of the officer, I spoke up and told the officer that I felt the way he was touching the other student was inappropriate.

The two officers at the scene then left the drunk student and instead focused on my 'disrespect' and stepped forward to physically intimidate me. They told me that if I did not shut up and listen to them, that I would be arrested. After it was clear that other students were uncomfortable with the altercation, I removed myself from the situation and left. However, the officers informed me that if I were to return to the house I would be charged with trespassing.

Unfortunately I was being hosted at Machado. I did return to my room, but ventured downstairs to the party to find my host. The security found me before I found my hosts. They found me in the laundry room next to the dance floor, slammed me against the wall and slammed me to the ground. Meanwhile they accused me of resisting when I wasn't, and scraped my face and chin. I was then detained outside of Machado until Brown students could verify my identity and the security officers finally let me go." -- Geovanni Cuevas

We, a collective of delegates attending the Latinx Ivy League Conference (LILC) at Brown University, write this letter expressing our dissent to the incident that occurred on early Saturday, November 14, 2015 at Machado House. "The Latinx Ivy League Conference aims to empower young Latinx Students who have overcome cultural and structural challenges to attend Ivy League institutions." Every year, a group of 80 students from these institutions congregates to discuss difficult topics that include race, gender, and socio-economic factors affecting the Latinx community in the United States. This year, the theme of the conference was "Unity Through Generations: The Past, Present, and Future Latinx Leaders." However, instead of discussing how our communities can become empowered in the future, we were forced to reckon with the reality that the struggles of our past still plague our present. One of our delegates experienced violence on campus at the hands of Brown University's Department of Public Safety. This incident recalls a longer history of institutional violence against communities of color, and must be addressed to ensure justice for students of color at Brown University and other institutions of higher learning in the United States.

The Latinx Ivy League Conference opened with Geo recounting his story to the various delegations present, and was met with a collective demand for justice. After deliberating possible courses of action, the conference delegation sets forth the following list of demands:

Institute mandatory monthly sensitivity and "Alternatives to Violence Project" training modules for Brown security staff (including outsourced officers) that address intersections of identity, negative student experiences, and systemic criminalization, with input from students, faculty, and experts selected by staff at the Brown Center for Students of Color and Dean Almandrez

Accountability for Saturday morning's incident, including acknowledgment of the occurrence and a formal apology to the student and broader Dartmouth community as well as for the negative experiences with the Department of Public Safety routinely experienced by people of color at Brown University.

The establishment of a clear process of communication about expectations, logistics and protocols between hosts and event security staff during special events should be detailed and ready to implement by January 1, 2016, and readily available online for any member of the community that wishes to view it.

Public apology from Brown University President Christina Paxson to the Brown Community, to the other Ivy Leagues, to the student organizers of the Latinx Ivy League Conference, and to the Dartmouth delegation addressing early Saturday morning's incident. This apology must be published and shared with other Ivy League Presidents.

Clear and accessible information about rights and resources for Brown University students, as well as the availability of a bias report system

Monthly meetings with minority leaders on campus, where President Paxson and Dean Mandel are present

For the Ivy League

One public statement from all Ivy League presidents responding to each bullet on this list, stating how they will implement similar solutions at their home institutions. This publication must include the amount of funding allocated toward each respective Ivy League's diversity and inclusion programs, and be released by Monday, November 23, 2015

While it is impossible to determine whether this or any other particular altercation is racially motivated due to the very nature of how systemic oppression operates, this ambiguity is precisely why Saturday morning's incident calls for such a thorough institutional response, and a discussion of greater endemic and structural societal issues surrounding police brutality and racial profiling. We are grateful that Geo emerged from last night's incident with minimal physical harm and with no criminal charges pressed. Geo was ultimately released by the officer in question, yet others in our communities rarely are. We respond with urgency both to this particular altercation, and in solidarity with all individuals affected by systemic criminalization of marginalized communities.

Less than one month ago and just down the street from Brown University, 100 high-school protesters were pepper sprayed and 8 were arrested responding to an incident at Tolman High School, where a school resource officer slammed a student to the ground. The school to prison pipeline disproportionately targets people of color: 70% of students involved in "in-school" arrests or referred to law enforcement from school are Black or Latinx. 92% of employers run federal background checks, systemically preventing individuals with criminal records from obtaining employment, and disproportionately affecting people of color. The Latinx community has a long history of violence in contact with the justice system, as documented by repeated incidents with border patrol. We stand in solidarity with our undocumented brothers and sisters as well.

Structurally, systemically, and institutionally pervasive -- our presence within our universities does not make us immune to the contingencies of what it means to be a person of color. Insofar as we have a platform to speak on these conditions, and keep institutions accountable, we use this platform now to advocate for change. We call attention to recent events that have plagued Mizzou, Howard, Yale, Ithaca College, and a plethora of other institutions of higher education across the country, and communities across the globe. These are not isolated incidents, and by default they will continue to occur unless each one of these incidents is dealt with thoroughly and comprehensively. As urgently as we've addressed this incident, we expect an equally urgent response. We demand immediate action, and will hold our institutions accountable until complete and appropriate action is taken and sustained.

The Latinx Ivy League Conference stands in remembrance of our past Latinx leaders that courageously sparked the fight that we continue today, expressing our solidarity with other marginalized communities that have perpetually endured constant oppression -- in all its many forms. Inasmuch as we continue to resist, we continue to prevail.

Written by Briana Christophers, Maryori Conde, Brian Elizalde, Ivonne Gonzalez, Jesús Mora-Valle, Paola Muñoz, Patricia Paulino, and Sol Taubin on November 14, 2015, on behalf of all delegates who signed above, and edited on November 15-16, 2015. A previous iteration of this document was read to President Paxson prior to the exchange between Latinx Ivy League Council Delegates, Brown students, and President Paxson and Chief Marc that took place on Saturday, November 14 at 1:20 pm.