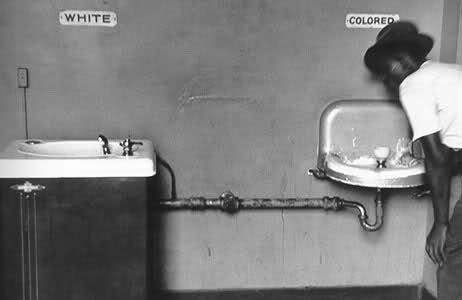 In a strange twist of fate, two age-old Civil Rights cases collide in Ferguson, MO -- half a century later. Is it just coincidence? Or could there be a deeper subliminal message lying tucked between the levels of America's consciousness? I decided to take a closer look.

Forever connected, yet perched on the opposite ends of the spectrum, Plessy v. Ferguson (1896) and Brown v. Board of Education (1954) are two landmark Supreme Court cases in the fight for African-American civil rights. The former case legalized racial segregation under the "separate but equal" law, while the latter case outlawed the doctrine.

In the immediate aftermath of the Brown v. Board of Education decision, the United States Army and National Guard were called to duty across the south to facilitate the enforcement of the ruling -- helping students of color register at previously all-white schools. However, most schools sprinkled in just enough color to be in compliance with no regard for full integration.

Fast forward sixty years. In 2014, the same "sprinkle in just enough color to be in compliance" practice is prevalent throughout our local and federal government, Corporate America, academia and beyond. Based on the numbers, it appears the minimum [black] minority threshold required to satisfy any diversity and inclusion efforts, affirmative action initiatives or equal opportunity employer criteria is the objective. As I pointed out in my book Impoverished State of Mind...

Disparity in Corporate America has severe financial ramifications for African Americans -- a group of people who already are disproportionately poor due to racial inequities. However, disparities within the criminal justice system, or simply law enforcement, have irreversible repercussions -- with death being the ultimate consequence. In the case of Michael Brown, Trayvon Martin, Jordan Davis, John Crawford III and countless others, we are dealing with human capital. Unlike financial capital, once a life is lost you cannot regain it. With the frequency and severity of these situations, we must ask ourselves the difficult question..."Are blacks and whites better off separate than equal?"

As it stands, we remain separated by wealth and nothing is equal about the employment opportunities afforded to African Americans. How does a city like Ferguson, MO in which blacks outnumber whites 3:1 (64 percent to 21 percent) have a police force made up of only 3 black cops? [3] Give me an instance of the opposite. What predominately white community has a predominately black police force? That community does not exist!

We are a country that likes to embrace ideals (e.g., home of the free or land of opportunity), no matter how out of touch these ideals are with reality. For instance, we promote the characteristics of a democratic government when all indicators suggest we are not living in one -- rather an oligarchy. We sell the notion of this "American Dream," when statistics suggest that there is a 47 percent chance that you will be stuck in the same economic class as your parents. [4] Equality is nothing more than America's mission statement, something we write on museum walls and hear echoed throughout town halls, but nothing about my experience as a black man in America feels equal to my white male counterpart.

Black students are failing miserably throughout public high schools across urban American. Dropout rates remain high as literacy rates remain depressed. As a result, high schools are becoming merely a pipeline to prison for many young black men. Part of the identified problem is that student bodies are majority black, while the facility and staff remains predominately white. Based on the continued underperformance and high disciplinary referrals, there is a growing public opinion that white teachers cannot effectively teach in predominately black schools.

Likewise, young black men are being gunned down by white police officers or getting buried underneath the prison to rot. As a result of all the police brutality and misconduct, there is a strong belief that white police officers cannot effectively patrol black communities. These issues reflect a clear and present racial divide.

It boils down to a philosophical question, "To conform or not to conform?" If a white teacher prefers to teach a certain way, however her all-black classroom performs better with a different delivery, are the students to conform to the teacher's style of educating, or should the teacher take into consideration her audience and adjust her delivery? I believe the latter is correct. But far too many teachers are not willing to meet their students halfway.

If a white police office is working the beat in an all-black urban community, his job is to protect and serve that community. He has to understand that poverty is a subculture. People who live in poverty usually live in concentrated areas of the city, away from the mass population. Within those imaginary four walls, the rules and regulations deviate significantly from that of the broader society. It's not the community's job to conform to the officer. It's his responsibility to conform to the social norms of the community he is there to serve. Otherwise, he will find himself causing more harm than he is preventing. He must understand that most young black men hate cops. However, he cannot allow this knowledge to paralyze him from making sound decisions. Most importantly, he cannot have inherent fear of the citizens he vowed to protect. This only leads to a quick trigger and more dead bodies in the street. I have no doubt in my mind that if Darren Wilson was black Michael Brown would still be alive. At the worst, he would be arrested. The fact that Michael Brown is dead is troubling. Knowing that Michael Brown is not the last young black man to be victimized by the police is downright disturbing. It gets right down to the heart of the matter, a controversial topic that a significant portion of our population is afraid to debate..."Are we better off separate than equal?"

I don't know the answer to the question; however, I do know that avoiding the question is not the answer. I'm not convinced that separation will provide a healthy resolution. Every decision has unintended consequences. Separation would create as many problems as it would solve. But through a sincere and objective analysis of the question, we will begin to realize the magnitude of America's race (equality) problem. Denial only perpetuates the problem. Admittance is the first step in recovery.

Torri Stuckey is the author of Impoverished State of Mind: Thinking Outside da Block http://www.amazon.com/Impoverished-State-Mind-Thinking-Outside/dp/0615659594