Much of the country is in a dither over the Supreme Court decision (Brown v. Plata) that requires California to release up to 33,000 inmates in order to reduce prison overcrowding. Rather than dither about it, Mary Ann Bernard wrote a passionate and thoughtful piece in the National Review Online on how to comply with the court order while improving care for people with mental illness and keeping the public safer.

After noting the high percentage of inmates who have mental illness she states, "The solution [to reducing prison overcrowding] lies in returning treatment of the mentally ill to the mental-health system." 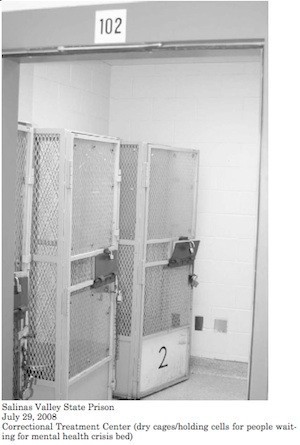 She quotes Dr. E. Fuller Torrey's The Insanity Offense on how due to the best of intentions, persons with mental illness were kicked out of hospitals and left to fend for themselves. That led to a "highly visible homeless population, of whom 30 to 50 percent are estimated to be mentally ill. These people often then commit crimes, with prison the inevitable next step."

Recognizing that treatment can prevent incarceration, she then argues for three reforms

1. Making Laura's Law mandatory in all counties and using it to evaluate prisoners discharged under the court order.

California's Laura's Law allows courts to order certain individuals with mental illness (those with a past history of violence caused by going off treatment) to stay in treatment even when they are not staying in a hospital, jail or prison. Enforcing this statewide would cut down on the number of mentally ill entering the prison system. She also endorses the proposal of California Treatment Advocacy Coalition founder, Carla Jacobs that all prisoners who are being released from prisons pursuant to the Supreme Court order be evaluated for inclusion in Laura's Law. In other words, they would go from prison to mandatory treatment in the community if that is what's needed to keep prisoners sane and the public safe. (Note: New York State is currently considering similar legislation (A6987/S4881) that would amend their version of Laura's Law, Kendra's Law, to require officials to evaluate mentally ill prisoners being released. It is currently stuck in the mental health committees).

She goes in-depth into the reforms that should be instituted in California's 1967 Lanterman-Petris-Short Act (LPS). This act guides when someone may be treated over objection. Many individuals with serious mental illness suffer from anosognosia: they are so ill; they don't know they are ill. You've probably seen people like this on the streets shouting the FBI planted a transmitter in their head. This is not something they "think," it is something they "know." These individuals will rarely access services voluntarily. She points out how the commitment standards preclude helping someone until after they become "danger to self or others" which is too late. This would also prevent the criminalization of mental illness and allow authorities to ensure that the mentally ill discharged from prisons don't become violent.

3. Pay for it with Mental Health Services Act funds

Finally, she addresses how to pay for it. After citing figures from Eric Revere, first vice-chairman of the San Diego County Community Mental Health Board showing how much cheaper it is to treat someone with mental illness than incarcerate them, she argues that the dollars used to incarcerate people with mental illness who are released as a result of the court order should follow the individual into the mental health system.

She also points out that California is unique. The taxpayers actually passed a Proposition (63) that taxes the well off to pay for services for the seriously ill. However, like in most states, that Mental Health Services Act money is not being spent to improve care for persons with serious mental illness; it is being used to provide social services for the potentially unhappy. She quotes examples supplied by veteran policy analyst and political consultant Rose King of Directions by Rose King and Associates showing the funds are being used for therapeutic drumming, yoga classes, horseback riding and other "therapies" not intended for people with serious mental illnesses.

It's a well-argued, well-researched piece. For fiscal conservatives, people who care about those with mental illness, and officials tasked with keeping the public safe, Ms. Bernard's suggestions should make a lot of sense.