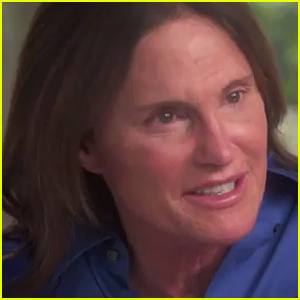 We are witnessing a breakthrough in our culture. Milestones like this don't happen very often with this much clarity. So, we must take a moment to acknowledge the bravery from within, and the inspiration that results from it.

The world is changing: #BruceJenner.

Bruce Jenner is finally telling his story about transitioning to a woman. I say "finally" because he has been dealing with this his entire life, just like anyone in the LGBT community deals with their own issues.

But this is Bruce Jenner! He was the sexiest man alive long before there was a "Sexiest Man Alive." He was the world's greatest athlete and an American hero. I grew up in the '70s, and let me tell you he was a "wow."

He's been married three times, has many children and has been part of a reality show dynasty whose lives have been documented every step of the way.

Except for the "real story," as he puts it.

Even though this is Bruce Jenner, I can relate on many levels. I've had my own issues to deal with through the years while prioritizing fatherhood above all else.

When he sat down with Diane Sawyer, we were all holding our collective breath. How would he handle this? Would it just be more "reality television" or would we really get the chance to see what is really going on? Would this just be another part of the news cycle or would it spark enduring change?

I knew the answer to those questions in the first 30 seconds, and I sat in awe for two hours. Yes, it was real, and yes we did see what's really been going on. But it was so much more than that.

It was so much more powerful that any of that.

Bruce's bravery is inspiring. He was so honest and so pure; in those two short hours he has now given so many others the chance to be brave, too. He helped me, I will tell you that, but more importantly, I know he helped others who are struggling with being transgender. Thank you, Bruce.

The information is eye opening. I actually learned something. There are a lot of misconceptions about transgender people, sadly. The communication was clear and simple and purposeful in its intent to bring understanding. So while Bruce was sharing his journey in real time, he also started a breakthrough of understanding in real time. It's about time.

There is now a blanket of social media love. For perhaps the first time, we are seeing an outpouring of compassion for a misunderstood issue coming through on social media. I was participating it during the broadcast, and it's still going strong. Tweets and posts of love, not condemnation, really can change people's lives and bring more understanding. This is what social media is for!

Bruce's family is just as brave. Clearly his children have had their own path to acceptance for their dad. What got me most was when his son said he was going to get "an upgraded version" of his father, and that despite all of his dad's accomplishments that this was perhaps the biggest.

We've all had our own journey through life, and I myself have struggled with societal pressures to be a certain way. While my story doesn't compare, I say all the time that we can learn from each other and we should support each other. That's why I wrote my own book, Out and About Dad, Coming Out for Father's Day. I can tell you with complete honestly that the whole thing is a terrifying experience. I can now understand how it's been for Bruce Jenner as a father too.

It's not easy to come out and share your story, but we all have to do it if we are going to change the world. It certainly wasn't easy for Bruce, as we all now know, but he did it...for himself and for all of us.

We are all so fortunate to have a hero (and his family) help us all do the same.