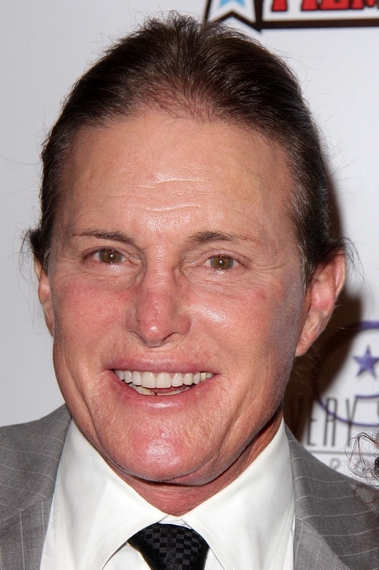 I anxiously awaited the most-talked-about interview with the rest of America over the past couple of weeks. We all wanted to hear what Bruce Jenner was going to say.

What was displayed on my television screen last night, as I sat glued to every word, had me none other than stunned -- stunned in the absolute best way possible.

Stunned that an individual in the public spotlight with so much pressure, the eyes of the world watching his every move, would sit down and, in great detail, explain where he was at in his life, detailing in front of millions that he felt he identified as a woman.

"For all intents and purposes, I am a woman."

My overall joyful shock comes from seeing someone with such media pull putting himself out there in a way that would societally resonate in two largely impactful ways.

I, myself, am 31 years-of-age. My generation associates Bruce Jenner with the reality TV Show with the sisters that are splashed all over our televisions, the beauty stores we shop at, the Twitter feeds that we follow and the Instagram accounts we scan.

My generation, and even those of newer generations, know "Bruiser" as that celebrity "TV Dad." As I was watching the interview, I not only thought about how many fans of the reality show were watching along with me, but also about the people who found themselves in a similar place as Bruce. Some may ask: "Why not keep this information to yourself, why go public with it in this way?"

Bruce is a 65-year-old grown adult. He is, along with his family, likely one of the most viewed people on television, in newspapers and magazines. Last night, his interview opened up an entirely different door. He spoke to multiple generations. He showed that as an adult, this is difficult, but that even as an adult in your mid-60s, you can do it. He was gentle, seemed approachable and open on the subject, and even had hints of humor throughout the interview. He was real.

Whether he realized it or not, he instilled a sense of comfort and familiarity in the overall ideas around gender and acceptance. My guess is that he spoke to millions on a much larger scale than just "an interview." "We're going to do something big," Bruce said in the interview, and I believe he's already set the platform of doing just that.

Bruce, your honesty and candor spoke to millions, and my idea is that, while you didn't just speak to a 31-year-old heterosexual female last night and countless others in my age range, you spoke to many others out there that are suffering in their silence; you spoke to people who are scared to come out with their truth as you so bravely did last night.

Relative to the reality show, Keeping Up With the Kardashians, I think this is the best thing to come out of their eight years on television; the most honest, raw and impactful reality to be displayed on our screens.

Diane Sawyer asked "Why now?" Regardless of Bruce's timing in revealing who he is at this present moment and where he plans to go, that "why now" question got me thinking about the other generation that Bruce also spoke to. The generation that my parents belong to, the Baby Boomers -- ones who may not be as familiar with what Jenner is going through. Bruce is a familiar face to that generation, just as he is to my own. However, to older generations, he is known as one of the most amazing athletes in history... and Bruce spoke to them last night too.

People tuned in, not only from all over the globe to watch that interview, but people tuned in from generations ranging from the 21st century to, quite possibly, some from the Great Depression era. Some people beyond the Baby Boomer period are only acquainted with the LGBT community by what the younger generation has shown them. I've heard countless times from my own parents about generational gaps. For instance, tattoos: "Tattoos are just a generational thing, it's different now than it was back when we grew up," are words I've heard my own parents mutter several times.

I don't think times have changed relative to this particular issue highlighted in last night's interview; I highly doubt that there are any more/less individuals in shoes similar to Bruce's now than there were 30 years ago, I just think people are now standing up and speaking out about it. Now a days, there are more resources available for people who find themselves in the same place as Bruce, and more and more are speaking up publicly, as Bruce did last night, about gender identity and the LGBT community.

"LGB youth who come from highly rejecting families are 8.4 times as likely to have attempted suicide as LGB peers who reported no or low levels of family rejection." (Source The Trevor Project.)

What Jenner did last night, taking the stage in such a brave way, didn't just reveal an interview, a personal or "family secret," he opened a huge door. He opened the door even further with discussion. He touched people ranging in age from, likely, as young as 12 years old, up to, as the ABC Interview showed, Jenner's mother at 88 years of age.

Jenner's message reached across the board, and my hopes are that Bruce's interview, his truth, his explanation of who he is today and where he plans to go in the future with "her," has reached people who resonate with his journey. I hope this will push further discussion, acceptance, understanding and most of all, empathy.

"What I'm doing is going to do some good, and we're going to change the world. I really firmly believe that." 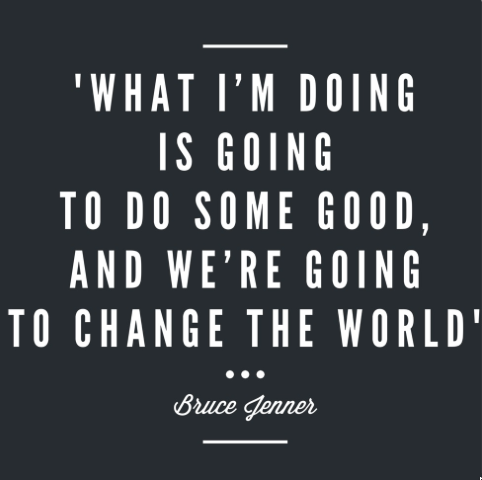 Ashley Alteman is known for her love of dinosaurs, ponies wearing sweaters, and overuse of commas. She is an editor's nightmare. She won a spelling bee in the 8th grade for correctly spelling "carrot" and knew from that moment she was destined to be an amazing journalist, or a sarcastic blogger; she went with the latter. Ashley details her laugh-out-loud parenting and personal fails at SmashleyAshley.com. You can also find her on BLUNTmoms.com and ScaryMommy.com. Follow Smash on Facebook