Though Illinois Republican gubernatorial candidate Bruce Rauner is not planning to attend Sunday's massive Gay Pride Parade in Chicago, his presence will still very much be felt -- thanks to a giant banner erected by LGBT advocates.

Equality Illinois and a number of associated community members and elected officials on Thursday unveiled a two-story banner featuring a photograph of Rauner along with his statement, made last year at a Tea Party event, that he would have vetoed Illinois' new marriage equality bill had it come to his desk as governor of the state. 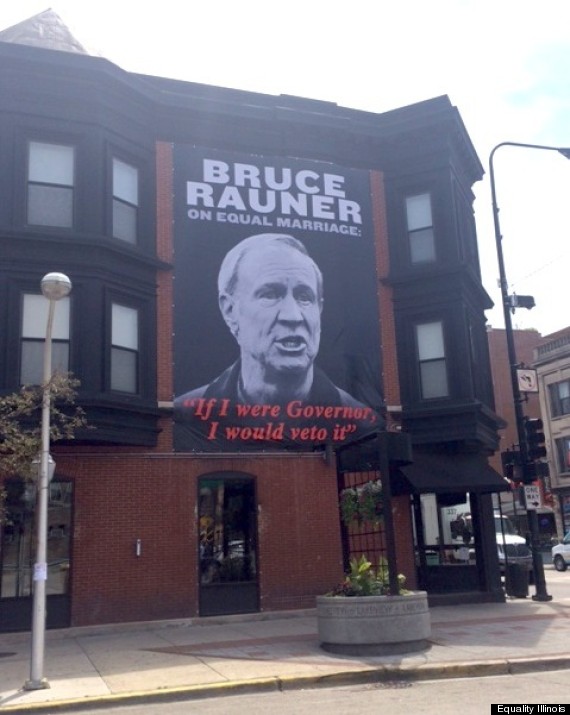 The banner is located at one of the busiest intersections along the route of the Pride Parade, which attracted more than a million celebrants last year and is expected to see possibly larger crowds this year thanks at least in part to the marriage equality law going into effect earlier this month.

Art Johnson, co-founder of Equality Illinois and owner of Chicago's popular Sidetrack bar, described Rauner as "an enemy of equality" in a statement.

"[Rauner] poses a clear and present danger to our ability to protect our loved ones through marriage," Johnson said. "Over and over, he has made it clear he opposes the freedom to marry and has chosen the side of bigotry and intolerance."

The Republican, who is challenging Gov. Pat Quinn for the governorship, has declined to share his personal beliefs on the issue -- describing them as "irrelevant" and claiming that he "does not have a social issues agenda." He reiterated this month that he was open to Illinois voters considering an advisory referendum on repealing the marriage law and suggested he would go along with the majority opinion.