Bruce Willis graces the cover of GQ's March 2013 issue and opened up to the magazine about the current status of his sobriety, and the best advice he could offer anyone.

Though many will likely have forgotten, the 57-year-old actor was once paid handsomely to promote Seagram's Golden Wine Cooler products in the late 1980s. But he quit the gig when he decided to get sober in 1988, and when asked about his sobriety these days he told GQ:

"I had been sober [for a while]. But once I realized that I wasn't gonna run myself off the pier of life with alcohol, drinking vodka out of the bottle every day ... I have wine now, mostly when I eat."

Willis, who stars in "A Good Day To Die Hard," which opens in theaters on Feb. 14, has had a long and impressive career, but he still has goals in sight.

"[My goal right now is] to keep it looking lifelike," he told the magazine. "In the past few months, I've read a lot about Old Hollywood—Gary Cooper, Cary Grant, Spencer Tracy, Audrey Hepburn, William Holden. Every story is that everyone was struggling. Everyone was flailing wildly. And it's kind of reassuring, because if you only see the performance, it's easy to associate that person with their work. Cary Grant was referring to himself as 'Cary Grant the actor. That's not me.' He would make a big difference between those two things."

The star, who recently spoke out to dismiss any link between onscreen shootouts and real-life gun violence, also revealed his best piece of advice:

"I recently heard one of my fellow actors say it in three words: "Just shut up." Just go silent," he told GQ. "Maybe it's being older; maybe that's just a tiny tag of wisdom, that you've got to think about something before you say something. I once thought that somehow, with this job, also comes the inherent right to say whatever the fuck I want regardless of whether I'm right or wrong or think that anybody needs to hear it or should hear it."

For more with Bruce Willis, click over to GQ. 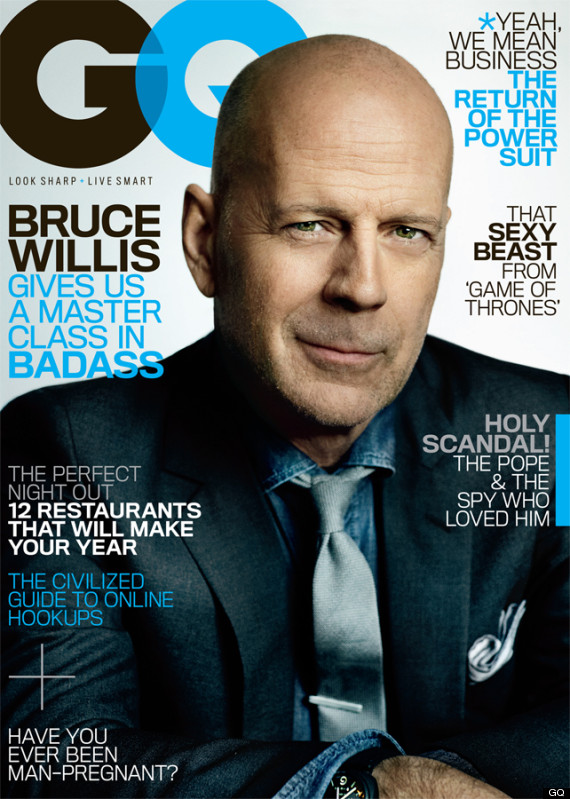