According to an article in the journal Behavioral Ecology, the sex is so unpleasant that the females are known to kick their mates off them to make the deed as quick as possible.

So why do these beetles have such "terrifying" penises? 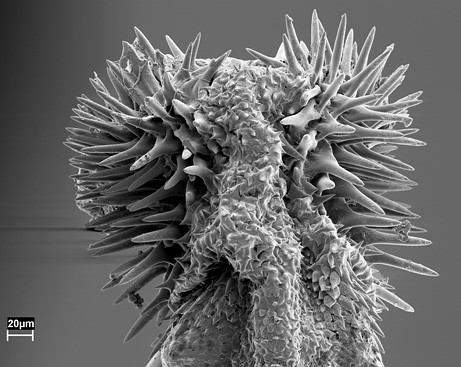 A group of Swedish and American scientists has manipulated the male genitalia of bruchid beetles to find out why the insect's penis has evolved to be quite so "nasty, sharp and destructive," Science Nordic reports.

What the researchers have discovered is that the bruchid beetle's penis -- though menacing in its spiny appearance and likely not pleasurable for its mate -- is useful for sexual selection.

Armed with a laser, microscope and a penis pump, the researchers shaved spines off the beetles’ anesthetized penises, and they can now reveal that the longer and more destructive the spines, the more success the male beetle has…

[R]esearchers found that the males with the longest spines on their penises get the most offspring, independent of other factors such as body size.

By dissecting the females after mating, the scientists also discovered that "a larger proportion of the ejaculate moved from the reproductive tract into the female body following mating with males with longer spines."

In bruchid beetles, sperm typically does not travel directly to the eggs but are instead kept in special cavities known as genital pockets. Arnqvist has hypothesized that the male beetle's penis spines may "open the gates to the bloodstream" from these pockets. 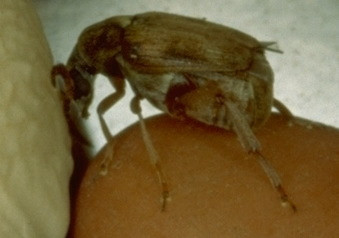 "This is the first time that anyone demonstrates in an experimental way the phenomenon of sexual selection after mating,” Professor Göran Arnqvist said about the new study, which was published on Oct. 25 in the journal Current Biology.

Visit Science Nordic for more on this study.

This is not the first time that the spiny sex organ of the male bruchid beetle has attracted scientific attention.

In 2005, a study explored why the scarily endowed male beetles hurt their female counterparts during copulation.

At the time, researchers concluded that they could find "no evidence that males gain benefits through harming their mates" and suggested "that the spines have evolved for other reasons than harming the females, such as serving as an anchor during copulation, and that the harm they cause is a side effect of a male adaptation and is not itself adaptive for either sex."

Sexual selection is one of nature’s strongest evolutionary driving forces, and as such, strange and painful penises in the name of evolutionary success are not out of the ordinary in the animal kingdom.

The penis of the Argentine lake duck, for instance, is "shaped like a corkscrew and can extend to more than 17 inches," which is longer than the bird itself. Female lake ducks are "often observed trying to fly away from an eager mate, leading experts to believe that the long penis could be an evolutionary response that makes forced copulation easier," writes The Week in its list of "11 weirdest animal penises on Earth."

The warehouse pirate bug also has a spiny penis, but this one's "daggerlike." Rather than inseminating females by traditional means, the male insect is said to "break though the female's body wall and insert sperm directly into her abdomen." According to LiveScience, female pirate bugs often die shortly after giving birth.

Ultimately, Arnqvist told Science Nordic, the bruchid beetle's menacing penis is "here to stay." However, he posits that it is plausible that the beetle's penis could evolve to become so hurtful to the female that it could threaten the species' survival.