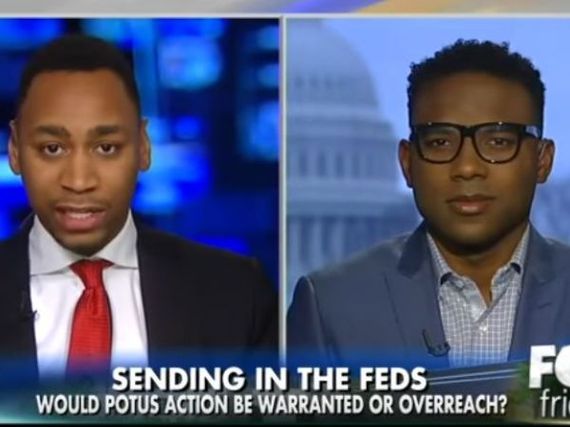 By now, most of you have probably seen the video that went viral this week of me on Fox News being accused of not actually being from within Chicago's city limits. While most of the attention on social media and in the press was focused on the question of who can and cannot claim Chicago as their home, the segment itself was centered around a more pressing issue: the violence and dysfunction occurring on Chicago's West Side and South Side.

Even though I am from Evanston--steps away from Chicago's city limits--I too am very concerned about the problems plaguing black and brown folks in the city of Chicago. Like Gianno Caldwell (the other gentleman in the segment) and many others, I have family members and friends who live in the city. And for the past couple months, I have had the privilege to work with educators and community members in Chicago. Rather than attacking each other about who is and isn't from Chicago, we should all be focusing on pressuring our new president to begin making changes that will help the city.

As it seems like President Trump could use some help with this, here are a few steps that he can take to get started.

1. Visit Chicago!
First and foremost, the president must visit the city of Chicago and have actual conversations with the people. There is no hope for change in the city if President Trump does not make an effort to connect with and hear out the people of Chicago. Not only would this hopefully open his eyes to the severity and nuances of the issues facing the city, but also it would show the people that the president is at least trying to help them. You can't fix a problem without truly understanding how the problem started, what factors contributed to it, and what some possible remedies are. Based on his statements, Trump seems more concerned about treating the symptoms and not the larger disease: Increasing the presence of law enforcement won't solve the problems of joblessness, mass incarceration or Mayor Rahm Emanuel's school closings--and the gripping pain these cause.

2. Fund Schools
For almost anyone who has spent time in Chicago, it is clear that the public schools are seriously struggling. If Trump was truly concerned about Chicago, he would have campaigned on improving public education instead of destroying it. In all, Chicago schools have seen their budgets slashed by approximately $170 million since September 2015, according to data released by the district. This past August, Chicago Public Schools laid off nearly 1,000 teachers and members of the district's support staff. How can we expect the children of Chicago to learn, grow and thrive without well-resourced classrooms, well-prepared teachers and the wraparound services necessary to meet the social and emotional needs of every student? That is what the people of Chicago have been asking for, and yet their cries have fallen on deaf ears. It took a 34-day hunger strike by parents and community members in Bronzeville--the Dyett hunger strike of 2015--to finally get a high-quality public high school for the students and families of that neighborhood. If Trump and his allies want the "carnage" to stop in Chicago, he should focus his attention on improving the public school system and use his bully pulpit to force Springfield lawmakers to properly fund public education. Education is not only a right for all Americans, but it is also a necessity for the future of this country. The residents of Chicago can only do so much to improve their schools; equitable funding starts at the top!

3. Work with Law Enforcement
Whether or not you hate the police, they are not going anywhere anytime soon. President Trump needs to work with lawmakers and law enforcement officials to begin changing the police culture in the city of Chicago. Tension between the police and the citizens of the inner city is at an all-time high, and the only way to turn this around is to re-work police culture and create conversations between the conflicting groups. While this is something that can, in theory, be handled at the state and local levels, we have still not seen any real change in the problem. President Trump and his GOP allies need to understand that black folks aren't against police, we are against police brutality and the over-utilization of force. This past summer, Americans were forced to watch the brutal killing of Laquan McDonald, an unarmed black man who was shot 16 times at the hands of Chicago police. Why would anyone trust a system that has shot their friends, arrested their father and brutalized their mother? Why would anyone trust law enforcement to help them, if law enforcement is part of the problem?

4. Crack Down on Illegal Gun Purchasing
Chicago has an illegal gun problem that the GOP has been completely blind to. Guns on the streets of Chicago didn't get there by accident; they were brought there by weak gun laws in surrounding states and throughout the country. While criminals don't generally get their guns from a store, all but a small fraction of guns in circulation in the United States are first purchased at a retail store--including the guns that end up in the hands of criminals. Many of the guns catalogued in Chicago's evidence lockup were made available via an illegal straw purchase. This means, if we want to get to the root of Chicago's murder problem, we must find a way to limit the supply of guns on the streets. And that starts by cracking down on straw purchases and tightening national gun safety regulations to keep guns from getting into the hands of criminals. Sadly, Trump and his Republican colleagues are bought and paid for by the National Rifle Association--an organization that has been the catalyst for loosened gun safety laws and the proliferation of weapons in America's inner cities.

Let's be real, it is refreshing to hear a president talk about improving America's inner cities. But let's not be fooled by Trump's lip service. He doesn't care about the people of Chicago--if he did, he wouldn't make blank statements or misguided tweets about bringing in the National Guard. You don't have to be from Chicago to know that placing troops in an American city is a bad idea. For almost 18 months, Donald J. Trump ran a campaign that was steeped in racism, bigotry and hatred for those Americans he chose not to understand. So now that he's in the White House, we are supposed to believe he actually cares about black and brown people? Give me a break!

Richard Fowler is the youngest syndicated progressive and/or African-American radio host in the United States. Fowler is also a Senior Fellow at the New Leaders Council.