Over 5,000 people turned out for the Climate March human chain in Brussels on Sunday, November 29th, despite a militaristic lockdown in the capital of Europe forbidding peaceful demonstrations. 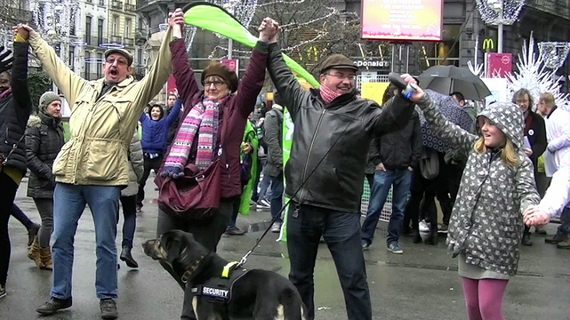 Amidst rain and machine-gun toting soldiers, activists joined hands to form a three kilometer long human chain extending from the Brussels Bourse to the Palais de Justice. The climate change demonstrators spread themselves into the long chain in the hopes of circumventing the police lockdown forbidding large groups of demonstrators. 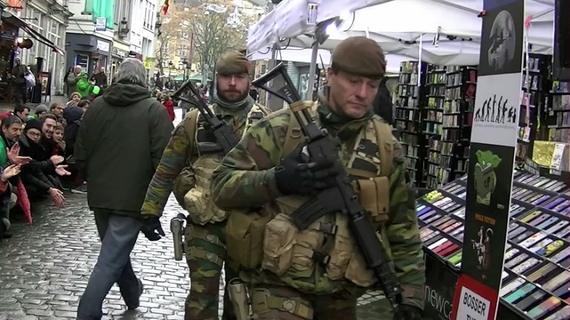 The Brussels security alert remains at level 3 out of 4 after the week-long lockdown that closed schools and public transportation during the search for suspected terrorists. Military police continue their patrol, more often in groups standing in doorways these days than walking in twos. Police forces have found no weapons, according to Eric Van der Sijpt, a magistrate and spokesman for the federal prosecutor's office. In the northeastern city of Trieste, Italy, close to the border with Slovenia, police did, however, seize a shipment of 800 shotguns moving from Turkey to Belgium. 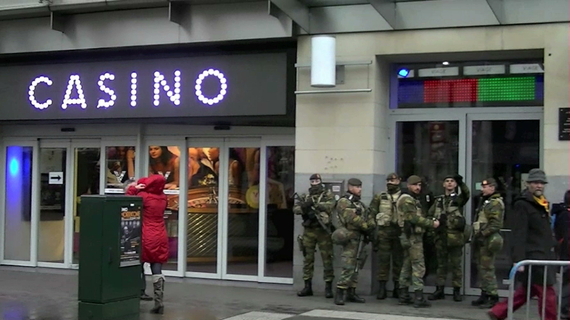 Brussles' show of military strength did, however, cause its small, local businesses to complain about the lockdown driving away tourist revenues, at a cost of 52 million euros per day - this as multinational weapons manufacturers's stocks hit record highs. 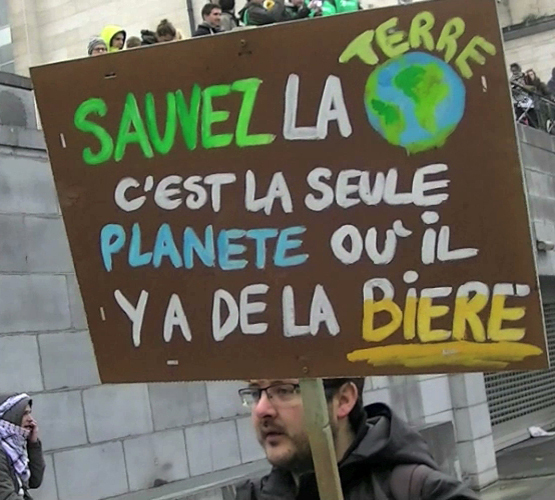 Whereas in Paris on Sunday, at least 208 climate change demonstrators were arrested after a clash with police, in Brussels, soldiers and police officers looked the other way during Sunday's illegal demonstration.

The United Nations Conference on Climate Change (COP 21) kicks off November 30th in Paris. With Paris traumatized by the recent attacks killing 130 people, United Nations Secretary General Ban Ki Moon linked climate change and terrorism, pointing out that people who are jobless and frustrated may join with foreign terrorist fighters from war-torn and African countries including Afghanistan, Iran, Somalia, Eritrea, Lebanon, Morocco and Libya. Other media has been quick to pick up on this link. 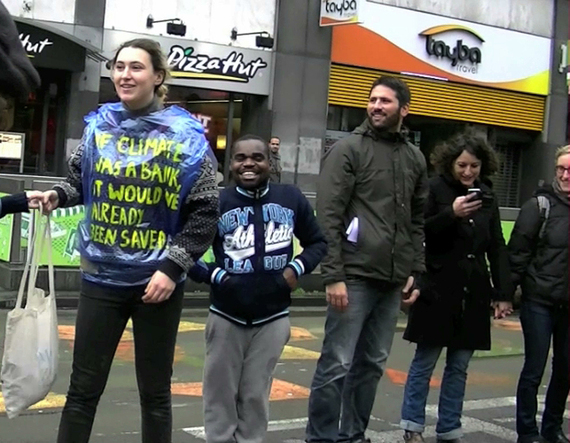 Conflict, mostly climate related, has created a pool of more than 60 million people in mass migration, who seek refuge abroad, numbers not seen since World War II. The problem is of such a magnitude that the question of taking in a few thousand refugees amounts to nothing more than political posturing.

How do you define World War?

Ironically, Syria, the home of a huge oil discovery, has just coughed up 7.6 million 'Internally Displaced Persons'. This year, there are an estimated 218,394 migrants entering Europe monthly, about the same number as in all of 2014. Iraq has 4 million IDPs, and there are more in poverty stricken or worn torn countries such as Libya, Afghanistan, Yemen, Somalia and other states.