"Matt doesn't kill characters like on 'The Sopranos,' so I'm not dead," Batt told the Huffington Post, referencing the show's creator, Matthew Weiner, and his last hit series. "But I agree that with what happened at Sterling Cooper he had to be fired."

What happened, in case it's been a few months since you watched the apparent end of his story arc in Season 3 (out on DVD March 23), is a timely lesson in the politics of fear and greed of the early 1960s. Late at night in the editing room Sal rebuffs the advances of Lee Garner Jr., the twangy son of a Lucky Strike magnate, so Lee orders him fired. Don Draper swiftly sacks Sal to keep the $25 million account, sneering "you people" out of the side of his mouth and suggesting Sal should have delivered to the client. 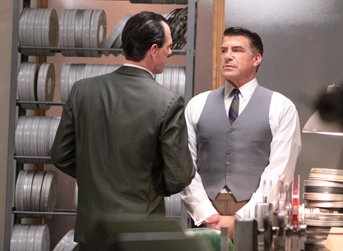 That's not how Sal envisioned confronting his sexuality.

"Sal could have prevented that by taking one for the team but I don't think Sal was ready for that," Batt said. "The guy was kind of creepy and drunk and it was seedy how it happened. What it boils down to is he's not going to do anything that jeopardizes his position at Sterling Cooper, but when he tried to do the right thing, he was screwed. In one way."

In Sal's last scene he's calling his wife from a phone booth in a tawdry corner of Central Park, looking ready to go get screwed in quite another way.

"I'm just praying that the last time we saw him at the phone booth, that he doesn't end up on a ramble for the rest of his life," said Batt. "But that was one of the options of the time, unfortunately."

What wasn't really an option at the time was coming out, as there was no one to come out to. Even Sal's brazen bedroom performance of 'Bye Bye Birdie,' complete with Ann-Margret hip shimmies, stirs only the silent suspicion of his wife.

One popular route for gay men of the era was to remain lifelong husbands and devoted fathers. Their children now watch 'Mad Men' and, Batt said, routinely come up to him and Weiner and say, "My dad was Sal." Nearly 50 years later, loveless double lives are still common and sometimes end in tragedy. From the anti-gay state senator who was recently arrested for driving drunk from a gay bar to the heaps of actors and actresses in Hollywood's deep closet, plenty of people have gauged the cost of coming out and decided they can't afford it.

"If you are openly gay, the masses can be asses and sometimes can't get past the fact that that's how someone lives their private life," said Batt, who has been with his partner, Tom Cianfichi, for 21 years. "Some actors have to make a choice. If they have the opportunity to become these huge megastars, making millions and millions of dollars and have to live a lie, that's a choice they have to make. Not that I would ever be a big star, but I just had to live my life the way I saw fit."

Easier said by a Broadway veteran than a big-screen leading man, he admits, but plenty of actors have talked about the choice between a big career and an honest personal life. Sean Hayes, who played Jack McFarland with convincing flamboyancy in 'Will & Grace' for nearly a decade, managed to skirt the issue of his sexuality until he was recently all but outed in a witch-hunty interview with the Advocate. Rupert Everett advised gay actors to stay in the closet.

"A gay man can only do drag," Everett told UK's Guardian, speaking with the trademark hyperbole he seems to believe. As for being an openly gay actor: "It just doesn't work and you're going to hit a brick wall at some point."

Colin Firth, who received an Oscar nod for his role as a tragically closeted professor in last year's A Single Man, acknowledged his complicity in Hollywood's gay problem.

Writer-directors Glenn Ficarra and John Requa have come under some criticism for casting Jim Carrey and Ewan McGregor as the gay couple at the center of their upcoming romantic comedy, I Love You, Philip Morris.

"People have asked us, 'Why didn't you hire gay actors to play these roles?'" Requa told the Independent. "Well, there are no gay actors in Hollywood! None of them are out of the closet."

One exception, if only in the television world, is Neil Patrick Harris, who balances his love of musical theater with playing a serial womanizer on 'How I Met Your Mother.'

"God love Neil Patrick Harris, how great is that," Batt said. "People grew up with him, they go, 'Oh it's him, it's that little boy and he just happens to be gay. How great for him!' The more of those kind of examples that happen, the better it's going to be."

Batt, currently on hiatus from 'Mad Men' because of his character's sexual orientation and not his own, is spending more time at home in New Orleans with Cianfichi at their home design store, Hazelnut, and promoting his book about his "wonderful Steel Magnolia, Auntie Mame, Southern belle of a mom," out in May.

Rumors that Batt and Cianfichi planned to marry in Vermont surfaced on gossip sites late last year, but Batt said they were news to him.

"I'm not gonna haul my cookies to another state to enjoy a right that should be enjoyed in all states," he said. "My minister told me after Prop 8 that [marriage equality] was going to happen, but unfortunately a generation has to go before it does. There are still people alive who opposed the civil rights movement. We're on the right path."

Meanwhile Batt is "lighting a candle" for Sal to be resurrected on 'Mad Men,' but you don't have to hold your breath for his next television appearance. He just finished shooting his guest role on the final two episodes of 'Ugly Betty'--small consolation for fans awaiting the conclusion of one of 'Mad Men''s most compelling storylines. 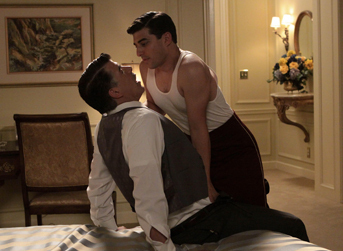 More than 1,500 of them have joined a Facebook group calling for Sal's return to Madison Avenue, anachronistic as it may be. Batt insists his request for such a campaign during an interview with New York magazine last fall was completely flip, and he knows better than to hope Weiner would compromise his vision at the whim of his audience, anyway.

"I was joking! I was totally completely joking," Batt said. "I would love to think that it matters, but Matt knows what he's doing. He knows exactly what he wants."

Might Don's new company need a talented art director? Its biggest client is Lucky Strike, but maybe Sal and Lee will meet again. Don, after all, knows how to keep a secret and has shown solidarity with fellow outsiders in promoting Peggy and turning a blind eye to Sal's romp with the bellhop in Baltimore in the season's opening episode.

"Limit your exposure," Don says on the plane back, and that's the closest he comes to addressing what he saw. It's a tagline for London Fog, and it's a not so subtle warning to Sal.

"Every word, every line in that show means something--there's no extraneous dialogue," Batt said. "Don says to me when I'm fired, 'You'll be fine.' So who knows what that means."

And if it means, as legions of fans are hoping, a phone call from Weiner, asking Batt to return to the set?

"I'd be on a plane in a second!" he said. "Are you kidding me? In a nanosecond, with the slicked hair and ready to go."