WASHINGTON -- About 11 years ago, D.C.-born artist Bryan Saunders -- already six years into making a new self-portrait every single day -- spent a couple of weeks making his self portraits while high on a series of different drugs.

More than a decade has passed since then. The drug portraits, which turned out to be odd, attractive, scary and revealing (scroll down to Morphine IV to see all those at once), are still being written about. Just in the last month, an Australian newspaper had an article about them; then a British newspaper ran a story. A week after that, the English-language Russian publication RT reported on the self portraits ( without mentioning they'd been made in 2001).

Saunders, who now lives in Tennessee, records experimental music, performs stand-up tragedy and still does his daily self portraits -- not many of which involve drugs anymore (though in March he did try out bath salts; the resulting self portrait, which you can see in the slideshow below, should deter others from doing the same).

He recently told The Huffington Post about the other uncomfortable, intriguing things he's doing to his body -- like blocking off his ears with wax for 28 days -- and how growing up and going to jail in D.C. got him there.

The Huffington Post: Are you still doing your daily self portraits?

Bryan Saunders: Yeah. Every day until I die no matter what. Hah!

HuffPost: Are you still doing a drug a day?

Saunders: The original experiment was in 2001. They just keep resurfacing online from time to time. The last real experiment that I did with them was "The Third Ear Experiment" where for 28 days I sealed up my external ears and attached a copper funnel to my mouth in an attempt to connect my eustachian tubes to my pineal gland by physically rerouting the way in which sound entered my body. Got some really great images from that!

It was both very torturous and meditative.

HuffPost: Could you hear at all while you were doing it?

Saunders: I could hear through my bones, both sides of my ear drums, and my eustachian tubes. The world was LOUD! No matter what you do you can't totally block out sound. I think I was hallucinating visually for the last 10 days or so. But I was mostly documenting the different stages of hearing that I experienced. The self-portraits are more "illustrative" of the experience.

HuffPost: What do you think of the drug portraits, a decade-plus later?

Saunders: August 2001. Eleven-plus years ago. I find it interesting how it keeps resurfacing every year or so. I like them, but there is a lot more to my art than just images on drugs. Out of 8,600-plus self-portraits only 50 are under the influence of something.

HuffPost: Are there any drugs you'd still like to try?

Saunders: I'd like to try crack some day, and heroin.

HuffPost: What do you wish people paid more attention to or knew more about? And did you want to do anything terrible when you tried bath salts?

Saunders: I didn't want to do anything terrible, I just wanted it to end.

I wish more people were interested in my other bodies of work. "The Stream of Unconsciousness (Narrative Mode)," for example, where over the period of several years I conditioned myself to record my dreams in my sleep orally.

And the transcriptions of my sleep talking combined with semi-wakeful dream descriptions are what I believe to be the closest humans can get to actually recording the experience of dreaming. Same with the "Stand-Up Tragedy" performance work. I wish more people paid attention to that as well.

But I don't blame the people, most of my dreams are nightmares, I don't believe in self-censorship -- that's where the good stuff is -- and people want to have fun in public they don't want to go out and have someone make them cry...

HuffPost: So you think that your dreams are scarier to people than the drugs?

Saunders: Yeah, definitely. People say my dreams are too weird or harrowing. I can't help it though. It's in my unconscious.

HuffPost: Where are you from in D.C.? Do you still spend any time here?

Saunders: I was born in D.C. and grew up in Arlington, Herndon, Fairfax, Warrenton, Manassas all over [Northern Virginia] really. But I've been in Tennessee since college [Eastern Tennessee State University] for the most part ... since the early '90s.

I go back to do performances about once every two years when I'm invited.

Saunders: Pretty busy. I wake up, work on my "Third Ear" book and CD. Then do some drawings for Scull Soup a local [Tennessee] band, then I do a self-portrait and work on lines for a short film I'm starring in. And Facebook and email between everything constantly.

HuffPost: Do you think growing up around D.C. influenced you as an artist?

Saunders: Definitely! Almost all of my tragic stories come from Northern Virginia suburban life. And D.C.'s jail and the Lorton Correctional Facility gave me a lot of material too. It changed my life forever, and for the better! As terrible as those experiences were, I would not trade them for anything.

HuffPost: Do you know Lorton as a jail or an artist colony? Or both?

Saunders: I was in the prison there for eight months. But I found out a few years ago that it was bought by Fairfax and turned into an art center. To me that's like my personal experience from incarceration to artist only amplified exponentially on a social level. I mean, to think people are making clay pots and stuff where people got stabbed to death with screwdrivers or raped is absolutely incredible to me! I never in my wildest dreams could have ever imagined that! One day I would like to perform there.

I got in a knife fight [in February 1990] on M Street in Georgetown.

A punk rocker had a straight razor and I fought him off for a while with punches and kicks but then so many drunk people were screaming for me to kill him in stereo, like a circle, so I stabbed him a few times with a butterfly knife. He survived with no problems. But what's weird is, the grand jury in D.C. indicted me with two counts of armed robbery and assault with intent to commit robbery while armed. It made no sense.

So I pleaded guilty to smaller charges like thefts that I wasn't guilty of to get out of prison. At that time if you were charged with a violent crime, they automatically sent you to Lorton so you wouldn't be waiting for court in the jail with the crooked bankers and drunk-driving senators and crackheads etc.

And because I was white and not black. I got out really fast. Black people facing the same charges as me, were dealt with much more harshly!

HuffPost: Were you an artist already back when you got sent to jail?

Saunders: No, I was an Industrial Electricians Apprentice working for the International Brotherhood of Electrical Workers. I didn't get into art until college.

First I wanted to be a writer, but I only had a GED (D.C. court-ordered), and when I took the placement exam for E.T.S.U., they said I was developmentally challenged. And I thought I'd written the greatest essay ever about my goals in life! They had no sense of humor or creativity. So I chose art because I thought surely you can be creative in the arts.

And then a year or so later I came up with the idea of daily self-portraits in my sophmore year. And after that I didn't want to do anything else. No assignments, no syllabus. I had my life assignment. My purpose.

But I've always done art that had ideas of harm. Like once I sewed my mouth shut for a photography student's project.

HuffPost: Was it tough growing up around here, coming of age in the D.C. area, which is known as a pretty conservative place?

Saunders: I never felt like D.C. was conservative then. At Hutchison Elementary School I was in the [gifted and talented] program and we learned about how people do sit-ins and everything. We did one once until we got pizza twice a week and stuff.

From what I hear they don't teach any of this anymore, and I get so shocked and upset when I see conservative people in 2012 trying to take away people's rights! I was born in 1969 and women had rights! I still can't wrap my brain around it. It's disgusting and really backwards.

HuffPost: Are you in pain in your regular life? Are you trying to understand pain and discomfort because it's something you have experience with? Or else why the interest in manipulating your body and experience?

Saunders: Well I used to be plagued with terrible pain. Psychosomatic untreatable pain. But it's gone away as I've gotten older.

But I'm much more concerned with just experiencing as much of life as possible while I'm alive. You never know when you're going to die so the drugs and other experiments for self-portraits are really just attempts at having a really rich life full of experience. 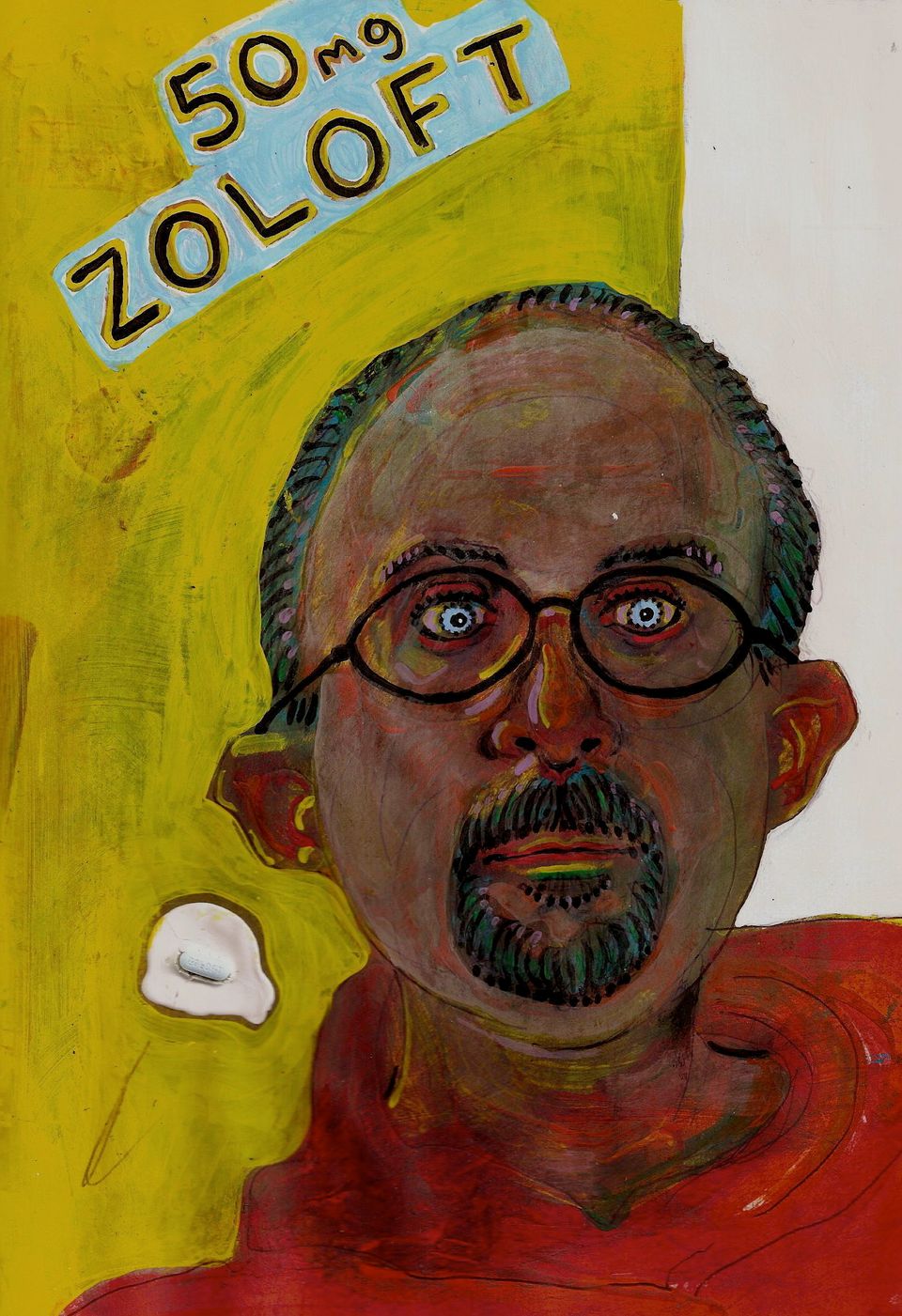