Bryant Gumbel is a crazy, fanatical Prince fan. How do we know? Compelling and conclusive video evidence, that's how!

The video comes from Gumbel's last day as a co-host of the "Today" show. As is that program's wont, there were acres of surprise guests, tears and testimonials from high-powered figures. (You can read this article for a fuller picture).

The biggest surprise guest? The musical giant now known as Prince who, back in 1997, was calling himself The Artist Formerly Known As Prince. (As Katie Couric says in the video, "The Artist is here!") Prince comes out looking exactly like Gumbel, right down to the glasses, and Gumbel just flips out. It's like when Oprah was surprised by Mary Tyler Moore and lost it completely.

We here at HuffPost Media consider ourselves to be students of history, and so we're honored to include this video in our occasional series "A Look Back."

Then Prince proceeds to play a medley, complete with personalized lyrics for Gumbel, and Gumbel sits on the couch and is singing along and it's clearly one of the top four moments of his life. Couric even leans in to say something to him and it's like he can barely register her presence. Also: Matt Lauer has hair! It's really another world.

Below, see a gallery of the insanely happy faces Gumbel made on that fateful day.

A word about how we discovered this video: we didn't! The folk at HuffPost Comedy alerted us to its existence. (They also told us that Gumbel once called one of their dogs "gorgeous.") So: Do you have an amazing vintage media morsel you'd like to share with us? Send tips to lookbackmedia@gmail.com! 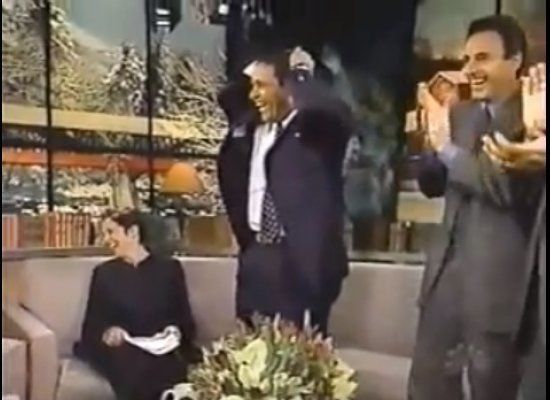