In the dead of winter, Bryant Terry is dreaming of Detroit Summer.

The multiracial, inter-generational collective founded by Afro-Asian couple and food justice pioneers James Boggs and Grace Lee Boggs has functioned as a source of inspiration in Terry's personal life -- he, too, is married to a Chinese-American woman -- as well as in the creation of his first, second and, now, third cookbook, The Inspired Vegan.

VEGAN
Terry's culinary roots and devotion to social change through food date back before the Boggs, however, and before Detroit was what's being called a hotbed for the food justice movement. It is, he says, inherent.

"I grew up in Memphis, Tennessee and both of my grandfathers grew up on farms that their families owned in rural Mississippi," he says. "When they moved to the city [of Memphis] they brought with them these agrarian traditions and a desire to grow their own food, a desire to connect with the land, a desire to share their bounty. That deeply impacted my thoughts around the power that we have to produce food for ourselves and to feed our families," he adds.

The disempowerment that comes from relying on others for nourishment is a message Terry credits his grandfather for teaching him and the one that lies at the core of his eco-cooking.

"This ethos around eating locally, seasonably and sustainably is the conversation du jour," Terry says. "More people are starting to understand the importance of these values and they've moved from the margins to the center over the past decade that I've been doing this work."

What Terry also hopes will move from the margins is the idea that soul food can be healthy.

SOUL
It's a stigma he attempted to negate in his 2009 book Vegan Soul Kitchen: Fresh, Healthy, and Creative African-American Cuisine. "Part of my desire to create that project was me being so angry at the way in which African-American cuisine is vilified, as the bain of African-American health," he says. The belief that soul food consists solely of deep-fried meats and sugary desserts simply isn't true. Nor is it true that most African-Americans are eating them with that kind of frequency.

"When I consider my own family and the people in the community in which my family grew up, these are not the foods people ate on a daily basis -- as if people were eating fried chicken for breakfast and red velvet cake for lunch -- these were celebratory foods," he says.

To the contrary, Terry adds, the community relied on nutrient-dense leafy greens, tubers and legumes, foods that most physicians or advocates of sustainable eating would argue we all should be eating.

"My goal is to revive these traditions...and say no, African-Americans can have a healthful diet and we don't have to look any further than our own cultural food ways," Terry says. "I simply want to challenge people to move beyond obvious ingredients and dishes and discover the hidden narrative of African-American cooking."

KITCHEN
Terry's fueling his mission from his own front yard, where he grows enough fruits and vegetables to share with family and friends. The rest gets prepped in a variety of Afro-Asian flavored dishes and served alongside the music, books and films that inspired them.

"One of the reasons I have suggested soundtracks and films and art and culture as a part of [The Inspired Vegan] is because that was just all in the context of eating in my home," Terry says, highlighting his family's musical heritage, including soul singer Ann Peebles (Terry's aunt) and Don Bryant, his uncle, who shared spots on Memphis' Hi Records with Al Green.

"At family gatherings," which he says included Sunday dinners, "people were singing, somebody was playing the piano, people were eating, so those things intersect for me."

"There's this chasm in our contemporary society where food is on one side and art and culture and community is somewhere else. I'm part of this movement to reintegrate all of those things." 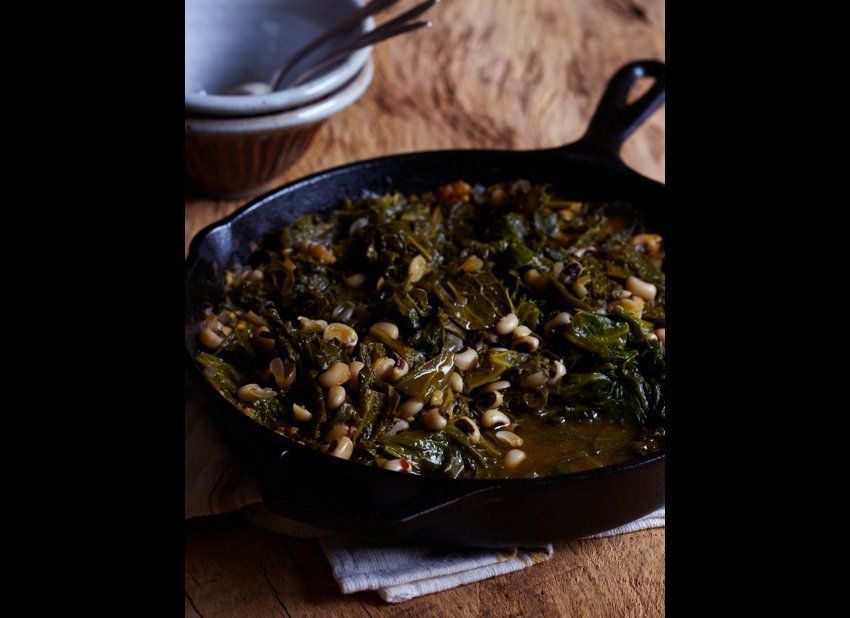 1 / 4
Black-Eyed Peas in Garlic-Ginger-Braised Mustard Greens with Quick-Pickled Mustard Greens, Sesame Seeds and Tamari
<strong>Yield</strong> 4 to 6 servings <strong>Soundtrack</strong> "Detroit Summer" by Invincible + Waajeed from Detroit Summer/Emergence <strong>Book</strong> <em>Living for Change</em> by Grace Lee Boggs <em>Since we always have lots of mustard greens growing in our garden, this has become a standard dish in our home. The combination of simmered black-eyed peas and sautéed mustards is simple yet flavorful, and the taste deepens after sitting overnight. I use just enough ginger to provide some warmth and subtle zing without overpowering the dish. Right before serving, finish it off with tamari and a heaping dollop of quick-pickled mustard greens. Eaten with a grain this is a complete meal.</em> <strong>Black-Eyed Peas</strong> 3/4 cup dried black-eyed peas, sorted, soaked overnight, drained and rinsed 1 (3-inch) piece kombu Coarse sea salt Mustard Greens Coarse sea salt 1 1/2 pounds mustard greens, ribs removed and composted, leaves coarsely chopped 3 tablespoons extra-virgin olive oil 1/2 cup finely chopped red onion 2 teaspoons minced ginger 1/4 teaspoon red pepper flakes Coarse sea salt 2 garlic cloves, minced 1 cup vegetable stock 1 tablespoon sesame seeds 2 tablespoons tamari sauce or more to taste Quick-pickled mustard greens <strong>Making The Black-Eyed Peas</strong> In a medium saucepan over high heat, combine the black-eyed peas with the kombu and enough water to cover them by 4 inches. Bring to a boil. Skim off any foam, reduce the heat to medium-low, and simmer, partially covered, just until tender, 50 minutes to 1 hour. Add 1/4 teaspoon sea salt for the last 10 minutes of cooking. Drain the beans in a colander, reserving 2 cups of cooking liquid. Set the beans and liquid aside. <strong>Making The Mustard Greens</strong> In a medium saucepan over high heat, bring 3 quarts of water to a boil and add 1 tablespoon salt. Add the greens and boil, uncovered, for 3 to 5 minutes, until softened. Drain in a colander, and set aside. In a large sauté pan or a medium saucepan over medium heat, combine the olive oil, onion, ginger, red pepper flakes, and 1/4 teaspoon salt, and sauté, stirring often with a wooden spoon, until softened, about 3 to 5 minutes. Add the garlic and cook, stirring often, until fragrant, about 2 minutes. Add the reserved greens and stir to incorporate. Stir in the vegetable stock, the reserved black-eyed peas, and the reserved bean liquid. Raise heat to high, and bring to a boil. Cover, reduce heat to medium-low, and cook, stirring occasionally, until the greens are tender, 15 to 20 minutes. Stir in the sesame seeds, season with tamari sauce to taste, and serve along with a whopping dollop of quick-pickled mustard greens.
Jennifer Martine