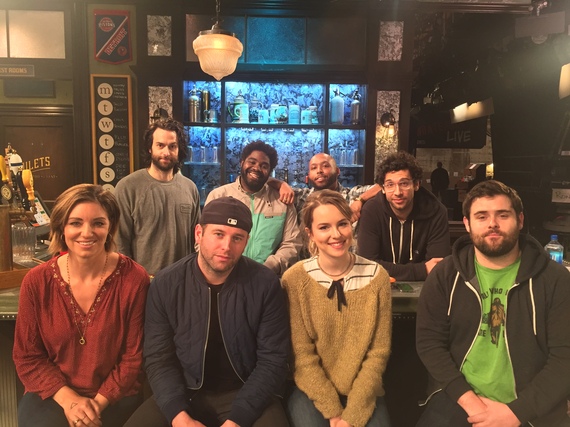 The cast of NBC's Undateable - and Bryan Cain-Jackson

During my first face-to-face interview with the cast of Undateable, and the first for BryanTALKS - a fun time is had by all and the conversation is completely raw in many respects as you'll hear.

I was forced to learn to get over the fact that the sound is not at all how I wanted it to be in the interview, add to that, I was losing my voice - if I was going to hang with this crowd, I had to embrace all of my mistakes (actually in the interview) as though it were a live taping.

This cast was so wild, so funny, and so real that it was really hard not to kick back and just watch and listen to them interact. These are real people who you'd really want to have at a bar with you. No joke.

A week before interviewing the cast, I saw a live taping of Undateable was truly blown away by the cast's energy and kindness. I sat next to a fan named Maria, she had seen every single live taping of Undateable except for one. I can't say that I've ever seen a fan following as loyal as what I encountered in the audience; Maria was but one fan, at least four others who I sat in the vicinity of had also been to nearly every live taping of the show.

This cast is totally worth that level of commitment.

This podcast episode is dedicated predominantly to this wildly fun NBC sitcom created by Bill Lawrence. The series is based on the book Undateable: 311 Things Guys Do That Guarantee They Won't Be Dating Or Having Sex written by Anne Coyle and Ellen Rakieten. Anne and Ellen round off the hour in talking about their latest undateables.

You can listen to the full episode of BryanTALKS here. The cast interview starts exactly at the 16th minute of the show.