When Chandra Wisnu married his wife Nanik 33 years ago, he felt like he had it all. He was young, good looking, well-educated and born into into a well-to-do family.

After the wedding, he wasn't so lucky.

Even before the big day, the 57-year-old Indonesian started noticing strange small bumps on his back that that looked like tiny bubbles.

Wisnu became known as the "Bubble Man" around his village, even though he kept himself locked inside his house so no one could see him and his pink tumors.

And when he did go out, he wore three jackets, a balaclava and sunglasses so he wouldn't frighten children.

"People are afraid, they are frightened of my horrible face and worried they might catch the disease," he told News.com.au. "So instead I avoid people, I rarely go out except to pick up my daughter from school. And when I do I cover my head and my face because I don't want my daughter's friends to bully her for having 'the dad with the horrible face'."

The lumps first appeared when he was 19, spread to his back by age 24 and covered his entire body by the time he was 32.

Now, 25 years later, Wisnu is hoping to finally find a cure, mainly because his two children are starting to show signs of the same condition. His struggle is featured in a new documentary, "Bubble Skin Man," debuting June 20 on TLC.

Despite his condition, Wisnu has never lost the love of his wife.

"You're still handsome," she said during one moment in the documentary, and insisted she was not disappointed by his appearance.

During the early stages of the disease, Wisnu's parents took him to see a number of doctors and dermatologists who were baffled by the severity of his symptoms.

Some doctors told him the condition was genetic and possibly caused by an abnormality in the nervous system.

After being prescribed creams that were ineffective, Wisnu gave up hope he'd ever find a cure.

“There was no special treatment for my disease," he told The Sun. "I was just told to see one dermatologist after another because they did not know how to treat me."

Dealing with the skin bubbles is a chore, especially because the lumps get very itchy and sore in hot weather, and because of the reaction he gets from people who see him during the rare occasions he steps out in public.

However, he is now speaking out about his situation in hopes of helping his kids, two of whom are showing signs of developing the condition, according to Anorak.co.uk.

"They only have some small tumors now but they worry they will get worse," he said. "If there is a chance to get such kind of free medication, I will take that chance, but right now my family is all the treatment I need.”

'Bubble Skin Man' Chandra Wisnu Seeks A Cure For Condition Before It Hits His Kids, TLC Documentary Show (VIDEO)
The Life And Times Of The Bubble Skin Man 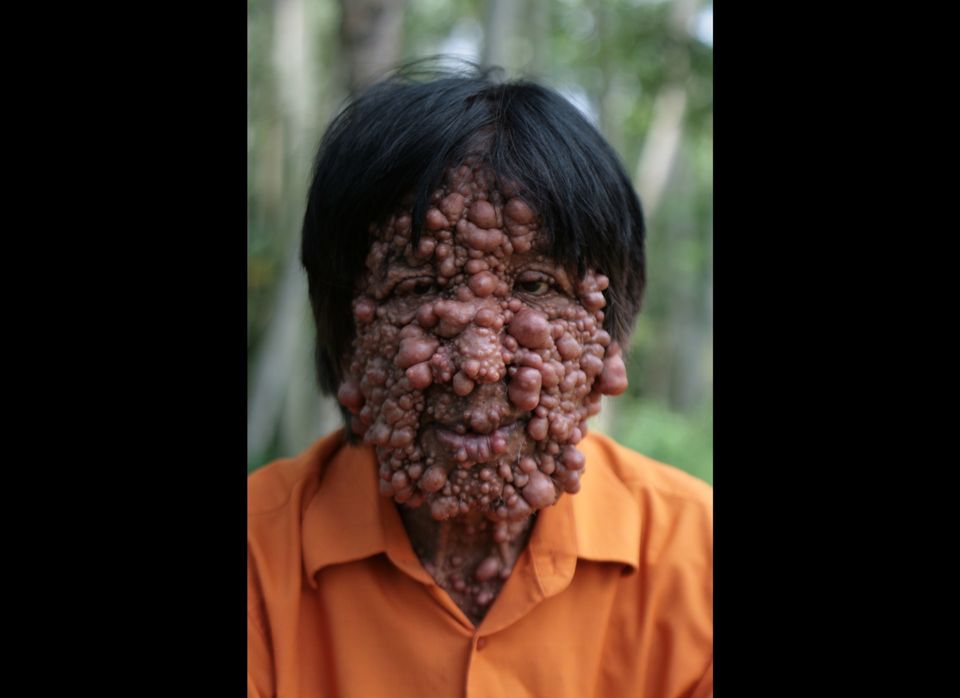