On this the hundred year anniversary of Buckminster Fuller being expelled from Harvard for the second time (1914 and 1915), I stop to remember what we can all learn from a man many of us believe was a Bodhisattva well on the Path to becoming a Buddha. Bucky (as he preferred to be called) was not interested in formal education, and like the Buddha he taught us not to believe anything we read or hear from so called "experts," but to trust our personal experience above all else. 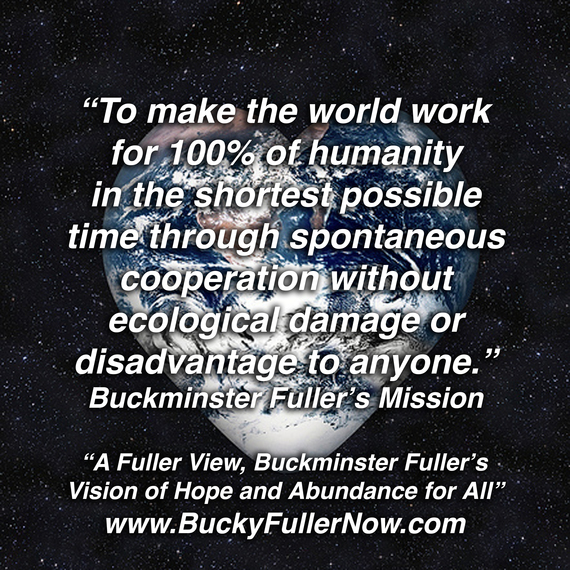 That's not to say that we can't or shouldn't learn from others with more experience than ourselves, but it does remind us that most "experts" (especially those in positions of power with governments, corporations, religions and other institutions) have an agenda that is by definition limited to their immediate group be it a company, nation, religious sect, etc. Accordingly, they can't do what genuine spiritual leaders have taught for centuries -- love thy neighbor, treat others as you would like to be treated, we're all in this together, etc.

Instead, institutions like Harvard (and all aspects of what we call "the system") teach us that specialization is good, and that each of us has to do something we don't really want to do in order to make a living or as Bucky referred to it "earn our right to be alive." This is the divide and conquer mentality that has kept a minority in power since the Big Man was appointed to protect the village and eventually became King (a tale Bucky often recounted as the dawning of modern politics).

We now know that somewhere around 1976 we humans reached a point in time when there was enough food to feed everyone. That is still true, even though tens of thousands of people will die of starvation today and tomorrow and the next day until ...

We humans shift our focus and resources from weaponry to what Bucky labeled "livingry." Everyone knows what livingry. It's the stuff that supports rather than ends life. Food, shelter, clothing, energy, education, clean water, etc.

This is the lynchpin of what this twice-expelled from Harvard "average healthy human being" (one of Bucky's definitions of himself) was able to show millions of people during his eighty-eight years on the planet he named Spaceship Earth. Perhaps it's time we start listening to this sage advice from a man who devoted his entire adult life to creating "a world that works for everyone."

The cosmic question Bucky asked audiences again and again for fifty-six years is more relevant than ever.

How do we make the world work for 100% of humanity in the shortest possible time through spontaneous cooperation without ecological damage or disadvantage to anyone?

This query will not be answered in a Harvard classroom or any institution that still adheres to the "divide and conquer" specialization mentality that's gotten us into our current predicament. It's up to each of us to look deeply into ourselves and find answers that contain personal integrity as well as the sustainability that will allow us to survive and thrive as individuals and as a species.

May the wisdom of Buckminster Fuller again become widely public and influential in creating the fuller future that is our birthright as Spaceship Earth crewmembers.