Buckminsterfullerene is a special molecule comprised of multiple carbon atoms arranged in a spectacular spherical shape. Though scientists long believed such a structure should exist in theory, it wasn't actually discovered until 1985. There are several sizes of what has come to be known as buckyballs that differ in number of carbon atoms but the one most commonly studied has 60, hence the name c60. 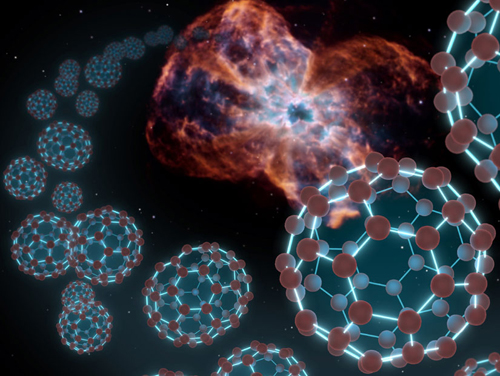 Researchers have studied buckyballs extensively in the past 25 years and found that the molecules have many interesting properties, some almost magical. They have been demonstrated to exhibit the same wave-particle quantum duality as photons of light, are superconducting, and can be fashioned into single molecule transistors. Adding to their allure they have been discovered in space and occur naturally at sites of lightning strikes.

Of perhaps even more important interest to us, buckyballs have biological properties. Studies have shown them to be potent antioxidants that can cross the cell membrane. And that is where buckyballs and aging meet. 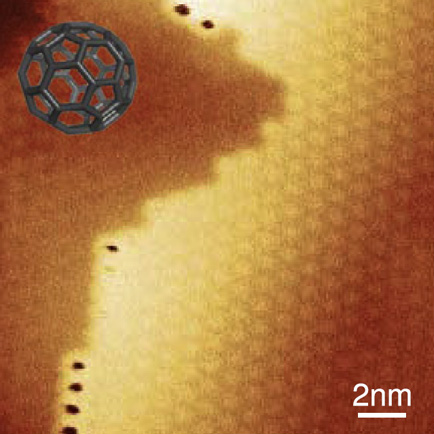 We humans, being self-aware, are keenly concerned about death. We have sought the so-called fountain of youth since time immemorial. In recent years as the pace of science accelerates, propelled by the exponential growth of computer technology, we find ourselves at the threshold of an era where we just may start artificially lengthening human lifespan.

Earlier this month, scientists in France led by Fathi Moussa published a study in the journal Biomaterials in which they claim c60 buckyball administration nearly doubled the lifespan of Wistar rats. Not surprisingly, these findings have gone viral on the Internet.

The study was ostensibly undertaken to determine if chronic daily ingestion of buckyballs would be toxic to the rats. The startlingly opposite finding of prolonged lifespan was unexpected -- much like how the accidental discovery that fungus killed bacteria in a dish gave rise to penicillin.

The researchers gave the rats buckyballs in a solution of olive oil injected into their stomachs. One control group received water and another plain olive oil. After 36 months all the water treated rats were dead while 67% of the oil treated rats and a remarkable 100% of the buckyball rats were still alive. At the end of the experiment the c60 treated rats had an average survival of 42 months whereas the water and oil-treated rats had mean survivals of 22 and 26 months respectively. The longest lived rat in the buckyball group died at age 66 months, more than double the usual rat lifespan, and perhaps the longest ever recorded in any experiment.

The scientists attributed this result to the antioxidant properties of the c60, which they demonstrated in a separate assay.

If this buckyball study turns out to be reproducible and valid in rats and other animals, then perhaps buckyballs could be one day tested in humans. Before we get too carried away though we should look more carefully at the findings.

It is believed that aging occurs in part as the cells in our body become progressively damaged and dysfunctional until they die. Much of this damage inside the cells takes place via the same process that keeps us alive -- metabolism of oxygen. As cells burn oxygen, toxic byproducts are generated called reactive oxygen species. These molecules carry dangerous free electrons on their surface which damage cell structures, proteins, and DNA as they collide into them. Antioxidants act to neutralize these toxic molecules by absorbing the free electrons.

Owing to its importance, our cells contain their own army of internal or endogenous antioxidants. Animals bred without these antioxidant genes die in infancy. It remains unclear though if consuming outside or exogenous antioxidants can slow aging, despite the claims of many supplement vendors.

Though antioxidants help cells to survive, they tend to live longer when they are exposed to oxidative stress. Vigorous aerobic exercise extends lifespan in animals and reduces a myriad of age-related disease in humans. Paradoxically, exercise involves extreme high volume oxygen throughput, up to ten times the resting rate. In response to exercise cells fortify themselves by increasing transcription of genes involved in oxygen defense and cellular repair. This effect is called hormesis, and implies it is possible too much exogenous antioxidant exposure could actually be detrimental by dampening the natural response.

Thus the balance between internal and external antioxidants must be carefully controlled.

The effect of buckyball exposure on lifespan could be due to its intracellular antioxidant activity as the authors propose, or perhaps it stresses the cells via hormesis, acts through some other as yet unknown pathway, or worse yet has no effect at all.

Despite its publication in the esteemed peer-reviewed journal of Biomaterials, there is reason for skepticism. The survival curve the authors presented in the figure below is widely incongruent with the reported results. It shows that all the c60 rats were alive at 42 months which was reportedly the mean survival. At 22 months, the mean survival of the water treated rats, all were alive; and at the oil groups mean survival of 26 months more than 80% of them were living. 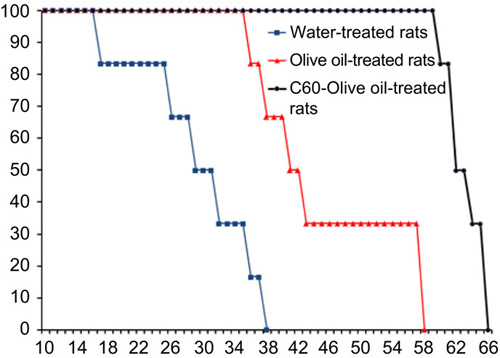 Also though statistics revealed there was significant lifespan effect in c60 versus water, the graph suggests the oil only group lived significantly longer than the water group too. Since there were only six rats per group, it is possible it was olive oil alone that made the rats live longer and that the variation between oil and oil plus c60 was just due to chance . This would not be too surprising considering the many health benefits found from olive oil consumption, itself an antioxidant. The reason olive oil was used is that buckyballs don't dissolve in water.

Furthermore, revealing possible carelessness, in the figure below illustrating the appearance of liver tissue in the treated rats, the same exact photo was used for two reportedly different groups with a slightly different zoom and crop location.

These flaws suggest we must view this study like all fountains of youth that have come and gone before it, with a healthy dose of skepticism.

It seems even the lead author Fatmi Moussa who admits he will be repeating the study with larger groups isn't so convinced himself. Asked if he has started taking some of his own medicine he replied "no, I do not consume C60 at this time."

Time, however, is in limited supply.

Dr. Dennis is Chief of Neurology at Good Samaritan Hospital in New York. He is an advocate of human lifespan extension and publishes the blog Extreme Longevity. Follow Dr. Dennis on Facebook and Twitter.