In Myanmar, posting an image of Buddha wearing headphones can land you with a multi-year jail sentence. Yet during the Buddhist New Moon festival in Taunggyi, a technicolor extravaganza of hot air balloons affixed with a Buddha's visage set aflame with torches and fireworks, police and monks watch the celebrations just like me and other onlookers. 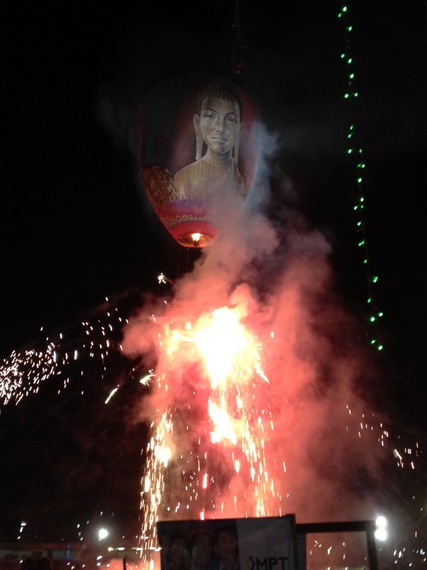 To parrot the most often-heard response from many local human rights leaders, religion in this country "is complicated." The country's 2008 Constitution recognizes Buddhism, Christianity, Islam, Hinduism and Animism as religions in Myanmar and promises to protect each of these religions. Moreover, it forbids "any act which is intended or is likely to provoke feelings of hatred, enmity or discord between racial or religious communities or sects." But the State also "recognizes the special position of Buddhism as the faith professed by the great majority of the citizens of the State." And herein lies the challenge.

In international media, "Myanmar" and "Rohingya," a small Muslim ethnic group in the Rakhine State of Myanmar, have become almost synonymous. And certainly the conditions in which this group is living in Myanmar are appalling. So far real engagement and responsibility on Rohingya by the Myanmar government has been avoided by the convenient and fraught reality that the government does not recognize this group as citizens. Clearly there is much to be done.

But for the many non-Rohingya Muslims that the law does recognize as citizens, the new government also needs to do a much better job than the previous in protecting freedom of all the country's religions (and punishing violent intolerance) equally. This will be a particularly thorny issue for the newly-elected National League for Democracy (NLD), which swept Myanmar's recent election with 80% of the vote. They did so without fronting even one Muslim candidate in over 1,150 NLD candidates who stood for regional and national elections. This in a country where between 4 to 10% of the population is Muslim.

In Myanmar distrust of Muslim neighbors and Islam is real. And it's a real problem. Take Taunggyi, home of the fire balloon festival, for example. Taunggyi has never experienced the violent inter-communal conflict that struck in Mandalay in 2014 and displaced thousands of Muslims and Buddhists in Meiktila in 2013. And nor is Taunggyi a stronghold of Ma Ba Tha, a hard line Buddhist group. In fact, Muslim and Buddhist alike in Taunggyi are quick to say that the town is peaceful. They have no such problems. But when you scratch below the surface, it seems only a matter of time.

Neighbors are pressured by each other to only shop at stores owned by their respective religions. In some cases lists of Muslim stores to boycott have been circulated. As explained by one young Muslim woman, "Symbolism of faith in Taunggyi is a bigger problem than the faith itself. Once I started to wear hijab at the age of 18, many of my Buddhist friends would only spend time with me inside our houses, but not in public. Even Muslim shop owners will ask you not to wear hijab to work, because they worry that they will lose customers." "Yes, that's correct," a Buddhist male returns. "Transparency is important in our society, and Islam is not transparent. You can go into a Buddhist temple if you want. You cannot just go into an Islam[sic] Mosque. Buddhist women uncover their heads; when Islams [sic] wear the veil, you cannot tell if they are man or woman. Transparency is important."

Inter-personal disputes are also a serious trigger of inter-religious conflict. Something as simple as having a motorbike accident can lead to mobs and participation of religious leaders on all sides to keep the dispute from escalating. In more egregious cases, religious leaders are reported to have pressured the courts to impose heavier sentences on a Muslim defendant. As one community leader explained, "Last year a bomb went off in a Muslim's house. His leg was injured and nothing else. But he was still sentenced to 6 months in jail. The monks were not happy with the punishment and the court extended the sentence to 2 years. It is not right, but there was nothing we could do. They [the monks] had posted on Facebook and people were angry. "

Instead of trying to address religious intolerance head-on, the new government should hurry to implement judicial reform, a benefit to all. Independence of the judiciary not only from military, government and business elite but also from religious actors is essential to the country's stability and progress as a liberalizing democracy.

Events that happen elsewhere have a huge impact on the psyche in Myanmar, much like they do in the United States, or France, or Greece. "Do you think Muslims are trying to take over the world with their violence?" one high-level Buddhist community leader asked me. No, of course not, I thought, how ridiculous. "What about ISIS? What about the Middle East? What about Malaysia and Indonesia now being Muslim countries when they used to be Buddhist? What about America and 9/11?"

As international actors, we must tread carefully. It is easy for governments, human rights groups, and even humanitarian workers to look at the country's religious dynamics and call foul. But judgment or an overemphasis on Rohingya is quick to drown out any productive conversation of more pervasive religious intolerance. And indeed, from the educated citizenry, it is quick to draw accusations of hypocrisy, even as we might be struck by the hypocrisy of a burning Buddha being celebratory and an earphone-wearing Buddha landing you in jail.