When it comes to water, this fatso's no pussy.

In fact, you wouldn't think he's a cat at all. Buddha, who weighed 31.4 pounds when his human died, quickly got used to his water treadmill at Stonewater Animal Rehabilitation in Franklin, Tennessee, WKRN reports. He used to weigh more than two healthy cats, but with a strict diet and 21 minutes a day on his weightlifting treadmill, he's lost nearly 5 pounds.

"One might think that a cat in water is cruel, how could you do that? But it really has made a huge difference in his health. It's been fantastic," Volunteer Penny Adams told the station.

The cat experts at The Cat Shoppe in Nashville -- who took Buddha in after his owner died -- believe he's obese because he was used to eating people food, including pasta and rice. That's bad for kitty.

When he began his rehabilitation, he wasn't too fond of the water (don't take it from us, watch this video). By his sixth visit, he was practically frolicking on the treadmill. The submerged machine, which is usually used on fat dogs, helps Buddha carry some of his weight and relieves encumbered joints.

His goal is 20 pounds, at which point he'll be put up for adoption. In the meantime, The Cat Shoppe is chronicling his progress on its Facebook page. Volunteers report that he's healthier and happier than ever!

Does this look like a sad cat to you? 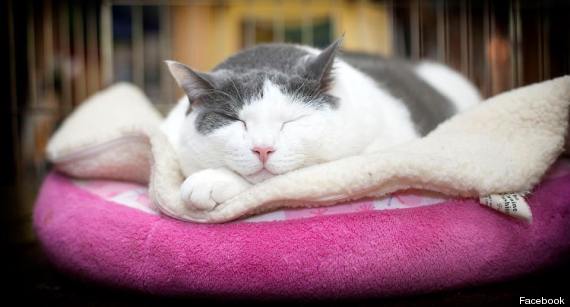