Towards a Multicultural Buddhist Practice

The three "jewels" or the Three Refuges is one of the core elements of Buddhist spiritual practice connected to all Buddhist traditions. In this series, the Refuges of Buddha's Teachings -- the Buddha, the Dharma, and the Sangha -- are explored through the lens of culture and cultural experience. These Refuges were offered by the Buddha to create safety and sense of spiritual home so that each practitioner can be invited to relax into the present moment of one's Life, to be able to explore what this Life is for us, and to cultivate the Life we really wish to live. Even the word "Refuge" has a connotation, a feeling, of a safe haven wherein to go. It is said that when we invoke the Refuges, as happens in the beginning of meditation retreats or practice sessions, there is always someone else in the world taking on the Refuges at exactly the same moment. Across cultures, the intentions to create peacefulness and safety in the world are that prevalent.

And the Buddha is about Culture.

The Buddha's expression about Freedom and Awakening has always been about culture, about diversity, and about the infinite variations in human experience with all the 10,000 joys and 10,000 sorrows of this life. This remains a controversial issue within some Buddhist circles, including my home lineage of Buddhist practice. It may be different for other Buddhist traditions, but within communities of Vipassana or Insight Meditation, there is sometimes a predisposition to idealize the aspirations of spiritual practice, and to assume that the highest intention is to transcend the vicissitudes of this life, to somehow obviate the sorrows of this lifetime so that we only experience the pleasant, peaceful or sublime. I have heard dharma teachers bemoan conversations in diversity and culture, and say something like "Why do we dwell on our differences? The point of practice is to see our similarities."

In taking Refuge in the Buddha, we take refuge in the possibility of freedom from greed, liberation from hatred and awakening from delusion -- this is one of the ways that "Enlightenment" is languaged. We do not take refuge in some deity or power that is mythical or higher than ourselves. We take faith and confidence that this path is possible because Siddhartha Gotama (the Buddha's name at birth), as a human being, was able to model that potential for our humanity. We take refuge in a spiritual practice that is deeply human.

And in that humanness, is the invitation to explore one of the central questions of being human: "Who am I?" This leads to a progressive inquiry of "Who am I really?" There is no succinct answer that can be generalized for everyone's experience. Each person needs to find their own answers in their own life. And one's cultural experience -- whether it be race, ethnicity, gender, gender identity, orientation, age, physical ability, or any other human characteristic or experience -- is part of that exploration. Nothing of our humanity is outside of those questions; nothing in one's life is not worth one's attention and mindfulness. And, this exploration does not stop with those two recurring queries, because those questions lead to the deeper inquiries of "Who are WE?" and "Who are WE really?" "Who are we as a spiritual community?" "Who are we collectively -- in our family, in our close circles, in our culture?"

Sometimes, however, the exploration of culture and identity within dharma circles has a tarnished reputation. It is expressed that using the experiences of culture and identity is in contradiction to the teachings of emptiness, shunyata, or non-self, anatta. This reasoning can lead to a dismissal of cultural experience within one's individual personal mindfulness practice and the collective awareness practice of a community. A further attachment to this view can discredit the exploration of multicultural experience as "not really dharma practice," or even as divisive and leading to more separation and suffering, rather than less. This is the reflexive reaction of cultural unconsciousness. It is the inability of the cultural unconsciousness to be aware of itself, that is, unable to be aware that culture is a human experience -- thereby pushing it away, ignoring it, or denying it in a multitude of ways.

These have been the views that disparage the need for culturally-specific retreats, like retreats for communities of color, and the Lesbian, Gay Bisexual, Transgender (LGBT) communities. And even if there is not an active dismissal of the need of diverse communities to explore spiritual teachings in a culturally congruent way, there can be a passivity that often arises in the mainstream culture, that diversity and culture is "not my problem but someone else's issue."

None of us can bypass cultural experience. It is part of each human existence and to not be mindful and deeply aware of our cultural characteristics will prevent a deeper experience of interconnection and relatedness, which is critically important to experiencing that which is beyond the ego. We go through our cultural experience; we go through the 10,000 joys and 10,000 sorrows of this lifetime; we cannot go around them. We go deep into the layers of our experience to see what is beyond it. We cannot simply say that it doesn't exist, or isn't important, or isn't the Dharma. All of it is the Dharma.

And why is the Buddha all about culture? Because the Buddha recognized the importance of culture as a path to freedom. In the Vinaya, one of the primary scriptures of the Buddha's Teachings, there is this story:

The occasion was this. There were two monastics called Yamelu and Tekula. They were of brahmin stock, and they had fine voices and a fine delivery. They asked the Blessed One: "Lord, now the monastics are of various names, of various races, variously born, having gone forth from various clans. They spoil the word of the Blessed One by using their own language. Let us render the words of the Buddha into classical metre."

The Buddha, the Blessed One, rebuked them: "Misguided men, how can you say 'Let us render the words of the Buddha into classical metre?' This will not rouse faith in the faithless or increase faith in the faithful; rather it will keep the faithless without faith and harm some of the faithful." Having rebuked them, he addressed the monastics thus: "Monastics, the word of the Buddha is not to be rendered into classical metre. Whoever does so commits an offence of wrongdoing. I allow the words of the Buddha to be learnt in one's own language.

Why is this story so relevant? In it, there were two monastics of the dominant culture and class who were concerned that the teachings of the Buddha were being "spoiled" by people who were different from them forming the Dharma into their own cultural experience. They wanted to codify the spiritual teachings into a single cultural expression. But the Buddha replied in no uncertain terms that they were "misguided" and allowed the "words of the Buddha to be learnt in one's own language." That last phrase is critical to understanding the deeper level of the Buddha's intention.

The Buddha lived in a historical time before the written script. This means that all communication was done through oral language. The ability for oral language to cross cultural borders was extremely difficult. This made language a determinant of culture -- if you departed from the land of your own language and went to a region in which there was another language you effectively entered a different culture. Language was equivalent of culture. Underlying the message of the Buddha's words was that it is misguided to offer the teachings in only one cultural form, and that he allows that the teachings be offered within the context of one's own culture. In our present day, this can be seen so beautifully in the photographs below of recent culturally-specific practice communities: 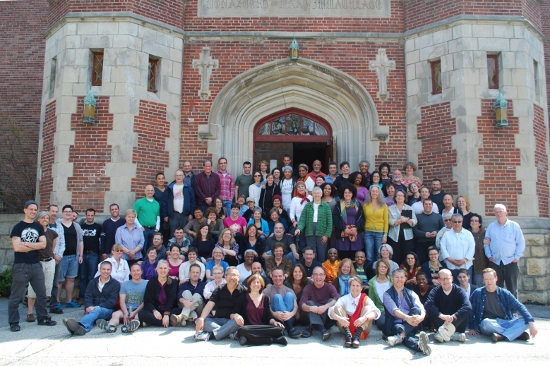 The Buddha is about Culture.

The next segment of this series will be about how the Dharma has always been about Culture.