Indra's Net and the Internet: Arising to the Interconnectedness of Life

Buddha means the "awakened one." Awakened to what?

The definition of Enlightenment in Buddhism is awakening to the interconnectedness of life. This is illustrated through the story of Indra's Net from the Avatamsaka Sutra.

A long time ago, in a far away place, there lived a king. His name was Indra. Indra was a great king. In fact, he was king of all the Gods. One day, he called his architect, Johnny.

"Johnny! I am such a wonderful king that I'd like you to make a monument of me for all people to see." After thinking for a while, Johnny exclaimed, "I've got it! Let's go to the royal treasurer, Sally, because this will be expensive." They went to Sally and Johnny said, "I want to build a monument for our king, Indra. I want it to be a net that extends throughout all space and time and I want to place a bright pearl at each node of the net. Do we have enough resources to build this net?"

Many years later, somebody came along and turned Indra's Net into the Internet. Instead of pearls, they put computers at each node. They created a physical system of interconnectedness around the world. Then, we started to see languages for communicating across the net. We call them Facebook and Twitter. Soon, we started to see what I call arisings or awakenings around the world. For me, the first big one was the "Arab Spring." The second big one was the "Israeli Summer."

I've worked in Jordan, Israel and Palestine. We had Peacemaker staff there. A man that we worked with a lot, Sami Awad, is the nephew of a man known as the Gandhi of Palestine. Sami is one of many people continuing his uncle's work. They've been doing nonviolent peace work in Palestine for years. For many years, they've had concerns that their message of nonviolence was not being taken seriously by many people and governments in the area. I feel that they was being marginalized. Now, after the Arab Spring, both Fatah and Hamas are seriously looking at their work. Government leaders are talking to the peace activists about training leaders in nonviolent methods. To me, that is an arising of the energy of Indra's Net.

I was with Sami about a month ago in Bethlehem, where he is based, making plans to assist him in his nonviolent work in Palestine. He had just finished meeting with his staff. He told his staff that if any of them are blaming anyone as an enemy or as an Other, he doesn't want them on his staff. It is important to see how we are all affected by the conditions and to see how our work can change the conditions.

He formed this view in 2004 at one of our Auschwitz Bearing Witness Retreats. He's done two of them. After doing a retreat he said, "I have been doing nonviolent work for years, but now I see that even thoughts and words can still be violent." He says he's been transformed from seeing himself as a Palestinian activist to seeing himself as a global activist. He now believes that his work can't include thoughts or language of Other or it will only generate more violence.

In Israel, a women in her early 20s, who couldn't afford her rent, put a tent in downtown Tel Aviv, saying "we need a new system." A week later, as it spread through Facebook, 10,000 people put up tents. Weeks later nearly half a million people arose with a variety of different messages. It continues and it's changing the government structure. The military budget has already gone down. Pundits ask "Who is the leader? What is the goal? What is the strategy?" But there is no single leader organizing things.

Then in the United States, something called Occupy Wall Street started. A few months later, nearly 2,000 cities around the world have joined. My hope is that a new paradigm is arising out of Indra's Net. My faith is that eventually that will be true. However, I'm concerned about what's happening now.

Are the current arisings awakenings to the interconnectedness of life or will they merely create new ways of creating separations between people?

In the Zen Peacemakers, we follow the precept of Not Elevating Oneself and Blaming Others. Another statement that gets at the Buddhist appreciation for language is the Verse of Atonement:

"All harmful karma ever caused by me since of old,


on account of my beginningless greed, anger and ignorance

born of my body, mouth and thought,

now I atone for it all."

Including mouth and thought in the verse means that what we say and what we think can be just as harmful or more harmful than physical violence. And our words are connected to our actions. In my view, it is even possible to commit acts of physical violence from a standpoint of interconnectedness as long as it is not done from a standpoint of separation. When we treat cancer, we wouldn't say that we are attacking something outside of our bodies and we wouldn't take lightly the side-effects of chemotherapy.

At the Auschwitz Bearing Witness Retreat, we sit on the tracks where inmates were selected for either immediate extermination or slave labor. In the morning, we share in small groups about what comes up. In my group this year, a German man asked, "How could human beings have created such an efficient system for killing other humans?"

For me, arisings to the interconnectedness of life do not use the violent language of separation. When I look for arisings, I ask: Is the language we use violent? Does it use dualistic thinking that separates one group from another? Do the actions taken reduce suffering? Are there different energies arising and coexisting at the same time? Are each of the groups involved open and accepting to other groups?

When I hear the word Occupy, it makes my blood cringe. Having worked in Eastern Europe and the Middle East, I feel that Occupation has a negative, military connotation: Israel-occupied Palestine. Soviet-occupied Poland and East Germany. Allied-occupied West Germany. The list goes on. To the Native Americans, the United States occupies their land.

When I read "We are the 99% who will no longer tolerate the greed of the 1%" as the Occupy Wall Street website states, I hear: "They are the bad ones." That's not the energy of Indra's Net. I'm not interested in making anyone into an Other.

When we talk about awakening in Buddhism, we talk about awakening to the experience of interconnectedness. Everything is interconnected, but we don't always experience it that way. The only reason we don't is that we are attached to our opinions. One particularly powerful opinion that we have is that there is an Other. Through meditation you can let go of your attachments and extend your awakening deeper. And there are other ways. We can see how awakened to interconnectedness we are by the size of the set of people we include as One with ourselves.

I call the energy of interconnectedness "love" -- not the love we usually talk about. It's much more natural and intrinsic. It is automatically taking care of other people because we experience them as us.

I've lived through many protests. From my opinion, whenever the language of the arising labels someone as Other -- whenever it is against someone -- it leads to more violence. When I awaken to the Oneness of myself, I can't call pieces of myself the Other. I don't attack myself. I take care of myself. When I see everything, including the social system, as myself, I take actions to reduce suffering. I heal the system as healing myself, not fixing someone else who is to blame for all the problems.

Arising to the Interconnectedness of Life? A Buddhist Perspective on the Occupy Movement
Occupy Meditation 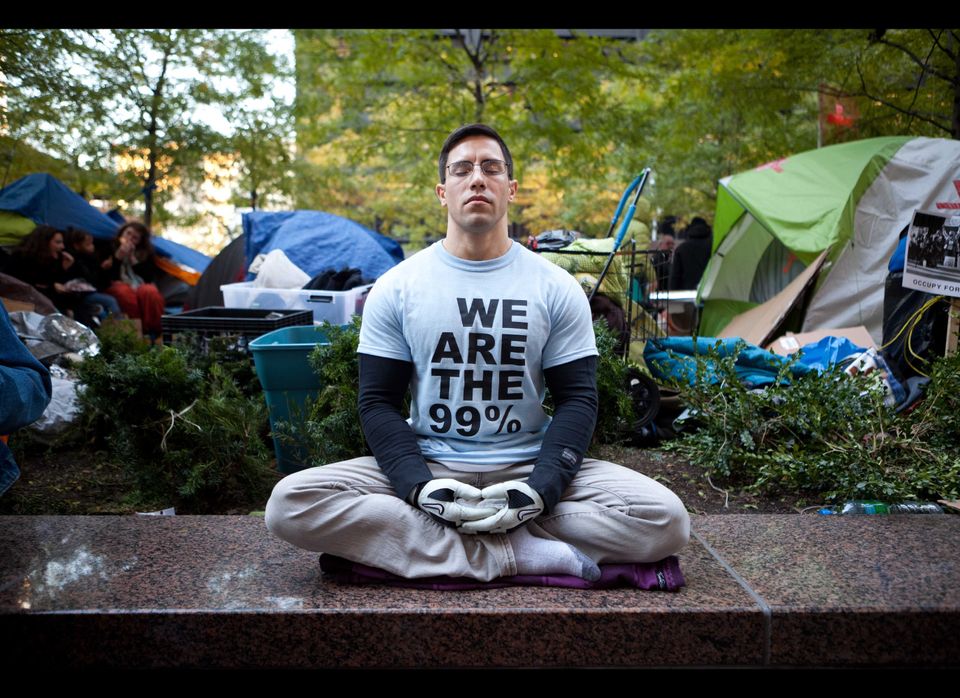