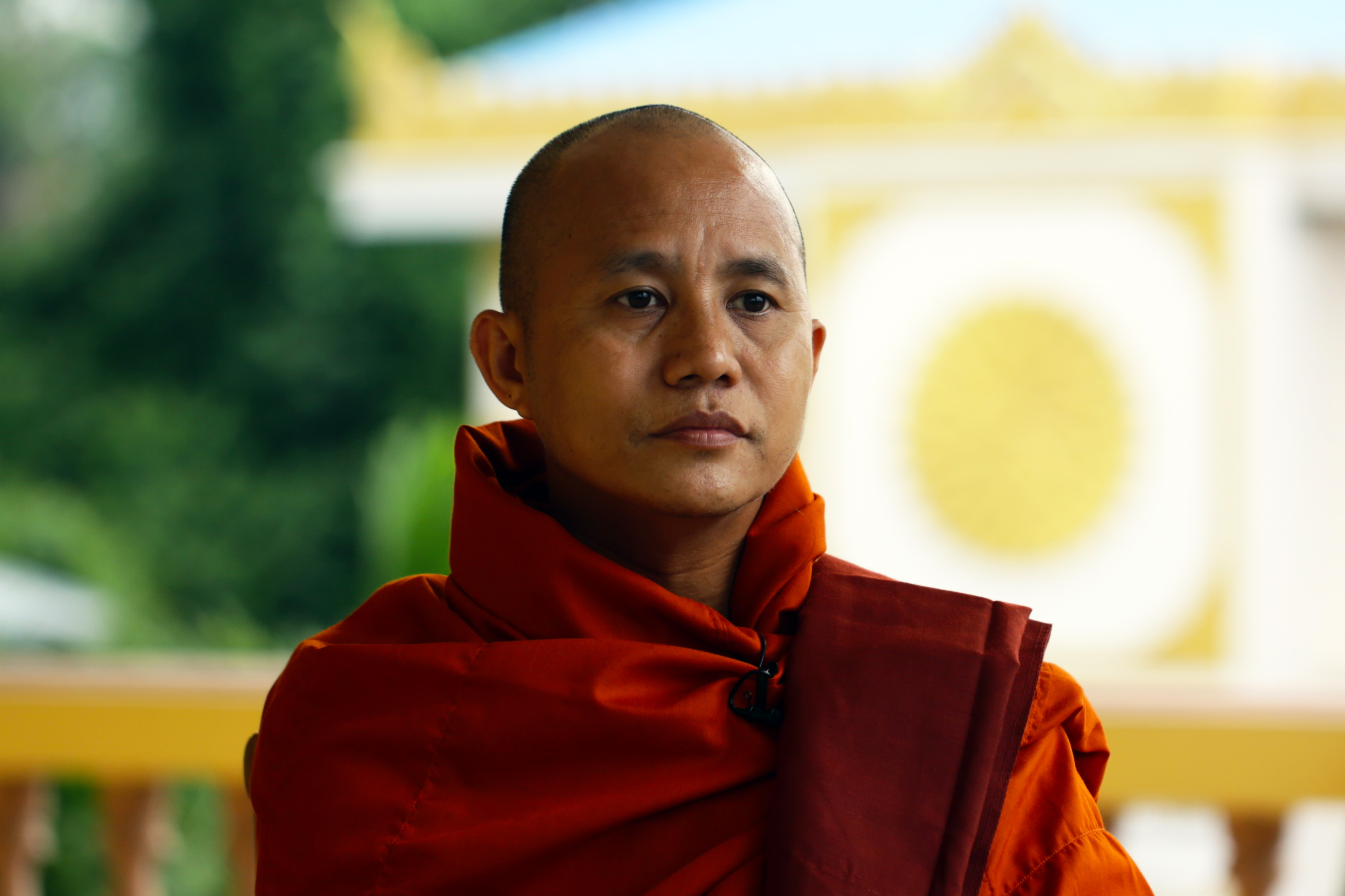 MANDALAY, Myanmar — The Buddhist monk arrived wrapped in saffron-colored robes with an entourage of muscular, younger monks who guarded him and hung on his every word at the sprawling monastery he runs and where his divisive, anti-Muslim teaching is gaining a strong following.

The monk, Ashin Wirathu, was unapologetic when asked about his role at the center of a rising tide of Buddhist extremism that has crested in a wave of anti-Muslim violence resulting in the deaths of more than 200 people and displacement of some 150,000 from their homes in recent months.

“Muslims are like the African carp. They breed quickly and they are very violent and they eat their own kind. Even though they are minorities here, we are suffering under the burden they bring us,” Wirathu, 48, said in a rare and wide-ranging interview with GlobalPost on Thursday.

“Because the Burmese people and the Buddhists are devoured every day, the national religion needs to be protected,” he said, announcing that he would push for a ban on interfaith marriage before the next parliamentary session and vowing to continue the so-called “969” campaign that calls for Buddhists to only do business with other Buddhists and exclude Muslims who have a strong tradition as merchants in Myanmar.

Muslims live throughout the country, as they were merchants along the trade routes between India and China. They have settled in waves of immigration from throughout the Muslim world and neighboring India since at least the 19th century. More recently, Muslims are coming across the border from Bangladesh in search of work and opportunity in Burma’s Rakhine State, where much of the recent violence has been centered.

Wirathu’s sermons play on the fear among some Buddhists in certain parts of Myanmar of a rising Muslim population that some feel is threatening the majority Buddhist religion and its traditions. Wirathu and others have spurred a movement known as “969,” which calls for Buddhists to band together to defend their faith and for Buddhists to do business only with other Buddhists. The numerology of the “969” movement refers to the virtues of the Buddha, the practices of the faith and the community. The distinctive “969” stickers are ubiquitous on shops, motorcycles and car windows.

Wirathu has also pushed a ban against interfaith marriage, claiming that the Buddhist majority is diluted by such marriages and reeling off one anecdote after another of forced conversions of Buddhist women to Islam. Many critics here and abroad say Wirathu’s sermons are racist rants against Muslims who he has likened to “mad dogs” and “cannibals” and, in perhaps a more charitable and consistent reference, as simply “troublemakers.”

But Wirathu’s movement is gaining a wider and wider following.

He heads the Ma Soeyein monastery attended by some 2,500 monks, has an active Facebook page and leads speaking tours that attract thousands of followers. Wirathu is also gathering signatures for a petition to introduce the interfaith marriage legislation which he has titled, “Safeguarding the National Identity.”

“The people are requesting that we put forward the ‘Safeguarding the National Identity’ law,” he said, adding, “I am committed to working on this law until it is passed.”

This proposed law, if it does come to a vote, would likely put pro-democracy leader Aung San Suu Kyi, who was elected to parliament two years ago, and those who support her efforts in a difficult position.

Political observers say it will put them between their hopes to unify the many different ethnic groups that have been fighting a series of open conflicts with the previous military regime and a broad populist streak among the majority ethnic Burmans who are coalescing around this new brand of Buddhist nationalism.

The proposed ban on interfaith marriage is not new in Burma, and it has been implemented in other countries in the region, including Singapore. It is similar to a popular idea that first emerged in the 1930s and called for a strong nationalist movement. And this is not the first time that Buddhist monks have used their authority to influence the history of Myanmar. They have always been part of major political movements.

Wirathu himself is no stranger to activism; he was arrested in 2003 for political incitement and served seven years in prison before he was reportedly released as part of a government amnesty program. Buddhist monks were also at the head of the 2007 "Saffron Revolution,” in which monks took to the streets in large numbers to protest the rising prices of food and fuel. Images of the military cracking down on the monks with tear gas and batons were carried around the world and served to propel the pro-democracy movement.

The current Burmese parliament was elected two years ago in what was widely seen as Burma’s first free and fair elections in more than a half century. And if this proposed law banning interfaith marriage is indeed introduced, it will mark the first time in history that parliament will consider a law concerning a national religion.

Wirathu said that theological authorities were “shaping the movement.”

A few days ago in Mhawbi, just outside of Yangon, more than 200 monks gathered at what they called a "peace conference," where this law was given shape, he said.

“Legal experts are now writing up a rough draft of the law,” he said. “And there will be a public announcement of this law on the 27th of June.”

However, the “Safeguarding the National Identity” law is rejected by the intellectual community, human rights groups and many civil society organizations. Mandalay, a city where the “969” movement has taken root, is famous for a strong intellectual community that has supported the pro-democracy movement. One member of that community is Nyi Pu Ley, a writer and artist, who has soundly criticized Wirathu’s proposed legislation.

“Doing this is like raising the political flag unnecessarily because there are many laymen. This is popular among the laymen. The “969” group and the Mandalay people are not on the same page,” he said.

But many learned monks from the Buddhist university are lending support to Wirathu and his proposed law. In a country where monks have a great deal of moral authority, political observers including Nyi Pu Ley fear this could lead to a large nationalist movement.

Thant Myint–U, a historian, author and most recently an adviser to the president, said, “Monks in Myanmar should concentrate more on religious matters rather than political matters. Many people in Myanmar, including those in Mandalay, are worried that there will be more outbursts of religions violence in their communities. People do not want this killing and this violence.”

A collaborative project of Open Hands Initiative and GlobalPost