"My mother use to tell me, it's hard to climb the ladder son, but if one foot slips after you get to the top, your ass hits the ground." ~ Buddy Guy 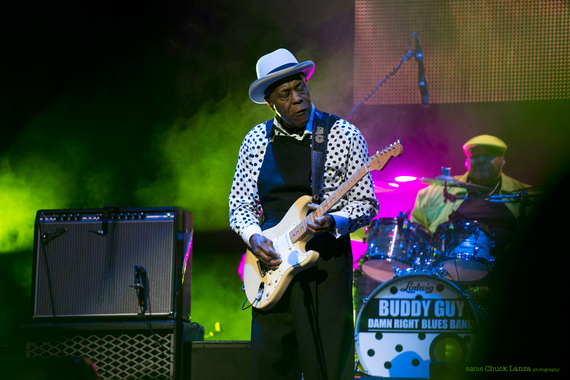 JL: Your album, Born to Play Guitar has been getting a lot of praise, in fact, you won a Grammy award for Blues Album of the Year. Are you happy that so many people are embracing the blues now more than ever before?

BG: I don't think that they're doing it more than ever before because it's not being exposed like it was when we had a lot of AM stations playing everybody's music. You can't drive down the street now if you don't have satellite radio--you can hardly hear a blues record played on the radio. And it's not easy for the young generation of people to know who Tom, Dick and Harry is who's playing blues if they don't know about it. The best way I can explain it is, you don't know how well I can cook until you taste it. But with the blues--it worries me a bit, because my own children didn't know who I was until they got 21 and was able to come into a blues club to see me perform. They cried and said, Dad, I didn't know you could do that. So I know your kids don't know who I am unless you tell them. And they'd probably say, where did you get that from? But in my days, you could turn your radio on and you could hear a good gospel record, you could hear a good jazz record, and you could hear a good Muddy Waters record. They just don't play it like that no more. When the disc jockeys come on your big FM stations now, they just play the same albums all day--the superstars. 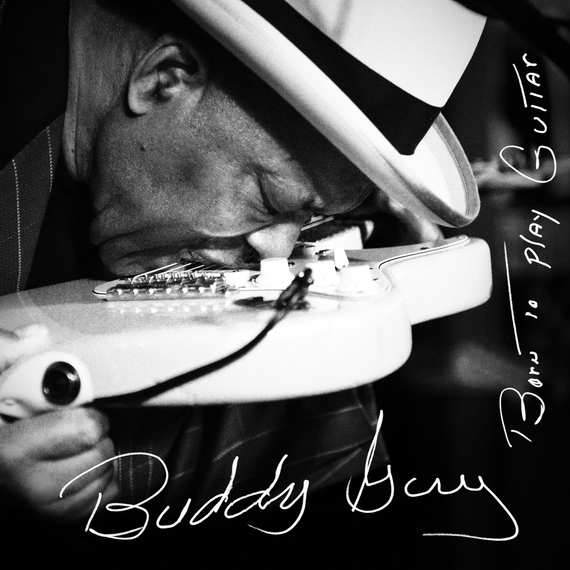 JL: There are a few tracks on the new album that initially jumped out at me. Born to Play Guitar, Wear You Out, Back Up Momma. Whether it is the melodic way that you deliver a song, or the grit and power of two dynamic guitar players cutting heads. Which one of your new songs personifies who Buddy Guy is today?

BG: That's a good question because I don't write most of the songs. I try to do my best playing or performing, but I still consider myself a student to those guys who deserve every award I've got--I didn't learn nothin' from the book. So for me to pick out something and answer you and don't lie like the politicians do, I'd have to let that come from someone else.

JL: I know your dad once told you, "Don't be the best in town, just be the best until the best come around." When it comes to some of your musical mentors like Muddy, Wolf, or the other blues cats from Chicago, what specific advice did they give you?

BG: Well. . .in the ways of action. You know, I thought I was doing better off. And I'm talking almost 60 years ago. I came out of Louisiana and I thought Muddy Waters, Howlin' Wolf, and Little Walter and them was making hit after hit--back in those days it was called the chitlin' circuit. They were playing in front of a 99.9% black audience. I went to Chicago to hopefully get a chance to see them and meet them, and go by some of these famous homes they got. The first time I got a chance to meet Little Walter, the first thing that he asked me to do was to buy him a half pint of gin, which was 90 cents. I cried because I couldn't believe Little Walter was asking me to buy him a half a pint of Gordon Gin. I just had my little savings and I gave it to him. My first question is: is it worth it to play music? But they were playing it for the love of music--not the love of money. 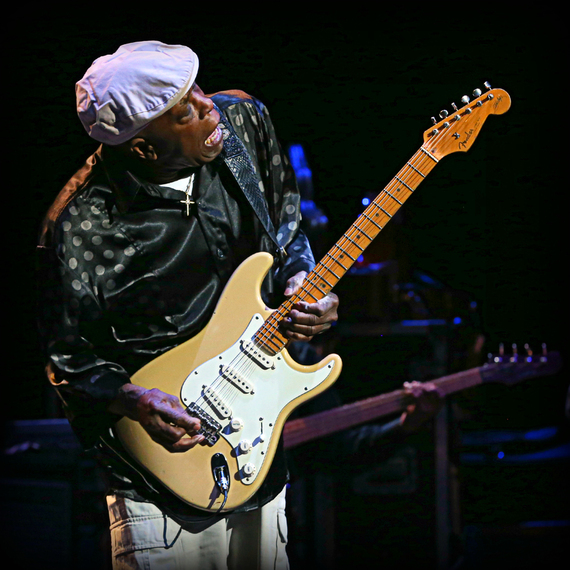 JL: Did you ever have a defined goal of what "success" would be like as a musician?

BG: No, I couldn't dream of nothin' like that. See, in my days you could count guitar players on one hand, because nobody was making a decent living playing a guitar. If you went to a Saturday night fish fry and played in a house or a room or whatever with a hat at your feet and you played the guitar and they threw nickels, dime and pennies in there. Everybody would listen to you sing and play and dance and get drunk and fall out and go to sleep and wake up the next morning. If you played well enough, you'd get yourself a good lookin' woman and you got drunk. But you'd have to go back to work and then next weekend do the same damn thing. There wasn't no such thing as I played well enough, I don't have to go to work tomorrow, I'll make enough money playin' my guitar.

JL: Describe to me what it felt like when you were honored by The President of the United States for being a person who has influenced American culture through the arts?

BG: First of all, I was brought up pickin' cotton and there were no machines. We were sharecroppers. And I said to myself, This is a long ways from pickin' cotton to be pickin' a guitar in The White House.

JL: What did President Obama say about that?

BG: He just smiled. They had the records on me anyways. The former President Bill Clinton made a speech for me when I was at the Kennedy Awards and he had me crying because he had some history on me of things that even I had forgotten. Some of the things he said I'm like, how did you know that? 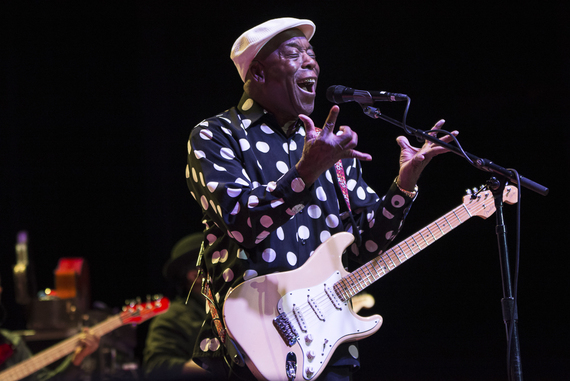 JL: On reading your book, I finally figured out the polka dot theme that has been one of your trademarks throughout your career. It's a memorial to your mother. If you were able to bring home that polka-dotted Cadillac to her, what do you think she would have said?

BG: You know, I go to sleep pretty often thinking about that because I was lying--I wasn't telling her the truth. I didn't even dream of a polka dotted Cadillac because I couldn't dream of playing guitar well enough to buy a bike. She had a stroke and I was the only child that was leaving and I was trying to put a smile on her face because all mother's back then would worry about their children when they took off and went somewhere. I knew I wasn't going to buy the Cadillac. And all of a sudden I went to sleep and then woke up when I made it to Chicago and I finally got a gold record. I said to myself, you lied to your momma, and you didn't get a chance to explain to her that you lied, and it crossed my mind as I was thinking, you should get something in her honor. I went to the guitar company and asked about the polka dots and they said for fifteen to almost twenty years that they couldn't do it, and then finally they got a guy who said, I think I can make the polka dot guitar. They didn't think it was going to do well, and then they brought it to the NAMM show in Nashville and they were all sold before they got there.

BG: Yeah. . .it's almost like the music we listen to. You know, I'm not jumpin' your questions but B.B. King, Ike & Tina Turner, Muddy Waters, I could go on and on. This country didn't know who and the hell they was until the British started playing the blues and coming back here. It exploded and it was like, The British are Coming, The British are Coming, and they said--no, no no, you wait a minute--you had this--all the time, you just didn't know. There was a television show in the 60's called Shindig and they were trying to get The Rolling Stones because they were getting bigger than bubble gum. And Mick Jagger finally said I'll do it if you let me bring Muddy Waters on and then they asked Mick Jagger who in the hell is that? And he got offended. He said, you mean to tell me that you don't know who Muddy Waters is--we named ourselves after one of his famous records. And that became the first time we saw him on television. We owe those guys a lot of thanks for that. 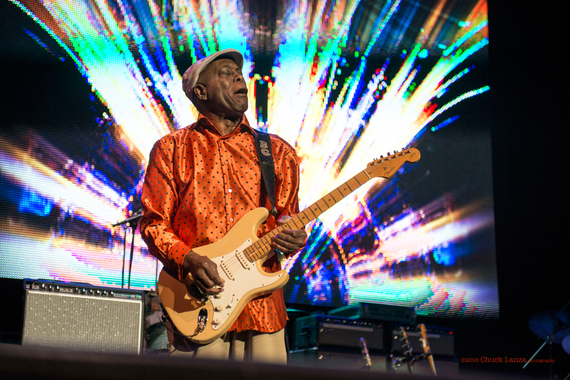 JL: I want to ask you a question pertaining to your friend, the late B.B. King. What is your most memorable moment with him?

BG: I was playing at a famous club in Chicago called the 708 club. I had watched Guitar Slim before I left Louisiana and I went there with a hundred-foot chord and I just went on the stage and then started jumping off the stage. And one night around 1957/1958 I made enough noise for myself for them to put me in their club. I looked in the audience and he walked in and sat down at a table. I was like, oh my god, I don't know what to play. During a break I tried to avoid him, but he called me over. And he sat down and told me that you were the only one who could play as close to me as anyone that I've ever heard. And I just went home that night and cried. That coming from B.B. King meant a lot. I made a comment to the group Foo Fighters and to Dave Grohl like I did to B.B. King: that I was looking for a dime and found a quarter instead.

JL: There have been a select number of noted musicians who have taken young, aspiring players under their wings and mentored them. Who was the first guitar player that you mentored?

BG: Well I didn't know I was doing it because quite a few people have came to me, but the latest one is Quinn Sullivan. I met him when he was seven years old. When you find someone at seven years old who could play like that kid--and I looked down at him and he started playin' I said I gotta unplug this amplifier because that can't be you, man. When Eric Clapton had his Crossroads Festival at Madison Square Garden, I sneaked him in there. Eric and everyone else was looking at me like, what the hell are you doing? And the first note he hit, Jeff Beck, Eric, and all the rest clapped their hands and asked, where the hell you get him from? 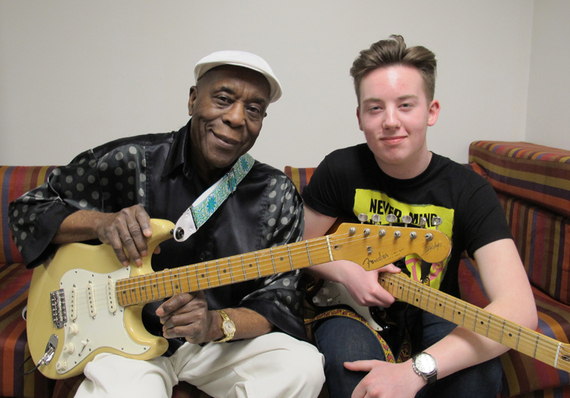 JL: How has mentoring these musicians changed or personally affected you?

BG: A lot, because you know it takes these kinds of young men and young women to keep this music that we have dedicated our lives to alive. Even before they started playing so much music on your music television shows you didn't see no older fellas with wrinkles on their face--now they look for youth, man--and good looks. It also helps sell records especially with the young women. The older you get--move out the way. Let the young people keep the wheel rollin'.

For more information about Buddy Guy, and touring information, visit his website: http://www.buddyguy.net/