Great Britain is the best current example. The austerity budget cuts of its ruling Conservative Party under Prime Minister David Cameron have brought economic growth to a halt, whereas U.S. growth is returning to a more normal three percent rate because of U.S. government stimulus programs. Britain is much more socialized, yet if it had taxed the wealthiest to support their programs instead of giving them even more tax breaks, it would have paid down debt without taking the earning and spending power away from government workers and unions (a lesson that we have only partially learned). Then such a slowdown would have been averted.

Paul Krugman brings this out in a recent blog, stating:

"What's happening in Britain now is that depressed estimates of long-run potential are being used to justify more austerity, which will depress the economy even further in the short run, leading to further depression of long-run potential, leading to...It really is just like a medieval doctor bleeding his patient, observing that the patient is getting sicker, not better, and deciding that this calls for even more bleeding."

Their economic thinking is not quite medieval but certainly from the 18th century, when Adam Smith's invisible hand theory was first used to rationalize conservatives' ideology that government is a hindrance to growth. We now know that cutting spending doesn't lead us out of recessions, or worse. It takes budget deficits during bad times to prime the pumps of private employers, until they loosen their own purse strings and begin to invest the trillions from record profits that they have instead used to buy back their stock in order to boost executives' incomes.

Most of the economic damage is being done in the government sector, as our own Labor Department's November employment report shows. The increase in hiring took place entirely in the private sector, with employment rising by 140,000. Governments 20,000 jobs last month to put the total loss over the past two years at around 600,000. States and municipalities have been forced to reduce staff to balance their budgets as required by local law. Without additional federal aid, it will therefore prolong the recession at state and local levels. 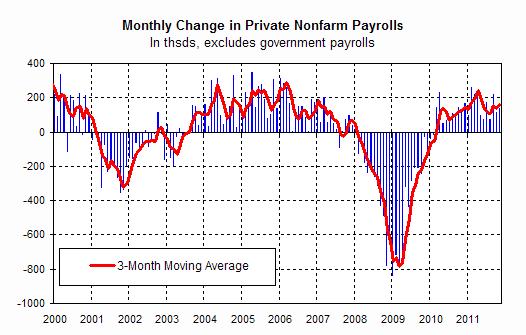 What should also be no surprise is hiring in October was revised up to 100,000 from 80,000 and the job gains in September were revised up to 210,00 from 158,000. The Bureau of Labor Statistics has been now revising past months' jobs creation by as much as 50 percent, since June, which means there really was no danger of a second recession. It also means private employers can get no more production out of their current workforce. So in fact the damage to employment is being done to precisely the workforce targeted by conservatives in England and America--government workers. 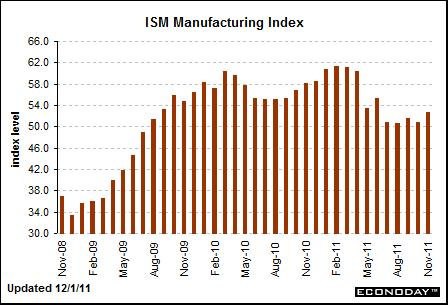 The expansion in the Institute for Supply Management's manufacturing survey buttressed our stronger growth prospects, which increased in almost all areas. The new orders index for November is up a very strong 4.3 points to 56.7, above 50 to indicate monthly growth and well above October. This index had been stuck at slightly sub-50 levels in prior months which now are forgotten. Helped by new orders, the ISM composite index is up 1.2 points to a 52.7 level that compares with the Econoday consensus for 51.5. November's level is the best since June.

And it may not seem like much (coming from a low base) but it is starting to look like the construction sector is incrementally adding to overall economic growth. Construction spending in October advanced 0.8 percent after rising an unrevised 0.2 percent in September. Analysts had forecast a 0.3 percent boost for October.

The October increase was led by a 3.4 percent boost in private residential outlays, following a 0.6 percent rise in September. Private nonresidential construction spending also posted a gain, rising 1.3 percent, following a 0.1 percent dip the month before. Once again public outlays declined 1.8 percent after a 0.3 percent increase the prior month, illustrating the damage those pushing for more austerity is doing to economic growth. On a year-ago basis, overall construction outlays improved to down 0.4 percent in October from down 0.6 percent in September. 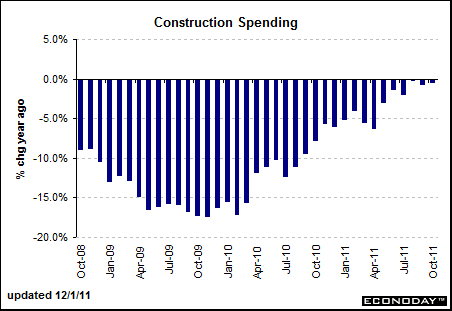 Construction outlays have risen three months in a row and in six of the last seven months. The level of activity is still subdued but it now appears to be growing and adding to overall economic growth, said Econoday. It is not an "engine" like manufacturing but it is in better shape than even less than a year ago.

So we see the result of austerity policies during recessions. They do not bring on recoveries, period. And that's why the situation in Europe is so much worse. Krugman's warnings have been realized:

"How did things go so wrong? The answer you hear all the time is that the euro crisis was caused by fiscal irresponsibility. Turn on your TV and you're very likely to find some pundit declaring that if America doesn't slash spending we'll end up like Greece. Greeeeeece!

"But the truth is nearly the opposite. Although Europe's leaders continue to insist that the problem is too much spending in debtor nations, the real problem is too little spending in Europe as a whole. And their efforts to fix matters by demanding ever harsher austerity have played a major role in making the situation worse."

The real result of austerity during hard times is it falls on necessary public services such as education, police and fire departments, and even environmental regulation. These are the essential services needed by all, rich and poor. Cutting back on those services not only prolongs the slowdown, but deepens it.