A group of Buffalo bars is offering free breast augmentation surgery to whomever collects the most beads during Mardi Gras celebrations this year.

The winner of the "Boobs For Beads" promotion-- technically open to men and women, although ladies get in free-- will receive the free boob job from Dr. Lakshmanan Rajendran, and can opt instead for a tummy tuck, nose job or any other cosmetic surgery similarly priced to the breasts procedure.

The contest has drawn criticism from those who say the schtick reinforces poor body image in women.

Sharon Mitchell, director of counseling services for the University at Buffalo, told The News,"I think the overall message is here's a shortcut to fixing something that’s wrong with you -- which may or may not be wrong.""

Although some women on the event's Facebook wall have commented, "Oh it's onnnnn!!!!" and "Bigger is better," at least one woman wrote she'd rather give the money to charity than win a free boob job. 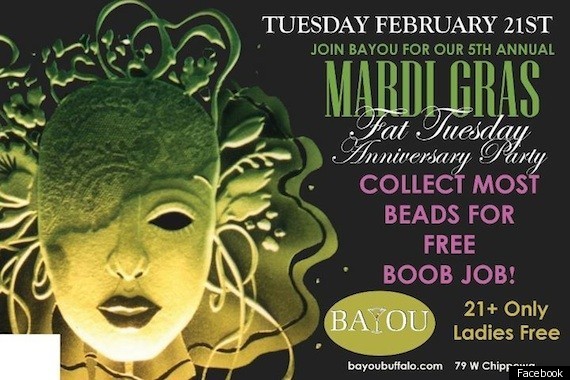