After the death of founding owner Ralph Wilson last March, the National Football League's Buffalo Bills were put up for sale. It's fairly unprecedented for a team to wrap itself with a "For Sale" sign. It almost, in fact, never happens.

Several groups have emerged as potential buyers, but one group, led by John Francis Bongiovi, Jr., also known as "Jon Bon Jovi," has received the most attention from furious Buffalo Bills fans. That's because Bon Jovi's investors are made up of a group of Toronto, Canada-based businessmen, including Larry Tanenbaum, owner of the Toronto Maple Leafs. Many fans and pundits have therefore surmised that the true intention of the Toronto-based ownership bid is to steal the Bills and move them to their next door neighbor to the north, Canada.

To indicate their vast displeasure about potentially losing their team, locals have organized a Bon Jovi Free Zone, boycotting his music all over town. The ban extends to bars, radio stations, and even P.A. systems in local stores. Earlier this summer, the Associated Press quoted Charles Pellien, one of four fans who organized the local boycott in May: "It's nothing personal. If Santa Claus was coming to Buffalo and telling us he was going to take our team to the North Pole, we would be boycotting Santa Claus."

Because Bills fans have been looking for divine intervention in this matter of the heart and soul, New Orleans-based artist Rob Clemenz has come to the rescue with his new website, TouchdownJesusMedals.com -- a sister site of the long popular SaintsforSinners.com, the place for imported Italian Saint Medallions hand-painted in New Orleans. Clemenz, a native New Yorker, has lived in New Orleans for several years, but his strong family and emotional ties to the Great State of New York have never waned.

Clemenz told me that that when he first heard of the proposed sale of the Bills, "I felt a strong 'call to action.' The facts seemed preposterous but I learned long ago that truth is stranger than fiction. There is an escape clause that could allow the Buffalo Bills to be moved to Canada."

Clemenz started painting a new selection of brilliantly colorful medals depicting Jesus wearing the jerseys of Buffalo Bills players. "I just had to offer something to the folks in upstate New York, to help them have faith that their beloved team would not be moving to another country. Obviously, they can't be -- ahem -- living on a prayer that this won't happen." His medals of Jesus wearing the Bills' jerseys not so subtly suggest and, in fact, clearly imply that Jesus is on the side of Buffalo -- and American football in general. 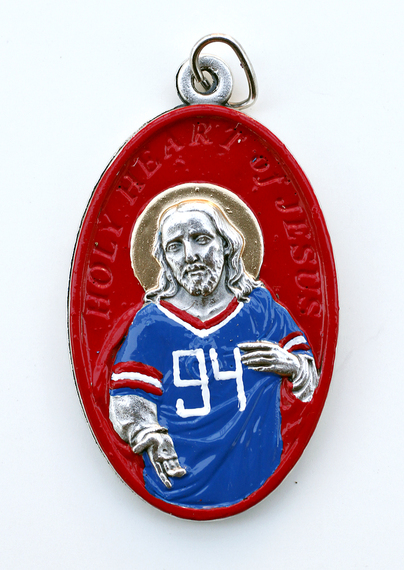 Clemenz also noted that the story of the impending controversial Buffalo Bills sale led him to an epiphany:

"When I started painting Jesus medals in the Buffalo Bills' colors of red, white, and blue, I thought, now this is exactly what Jesus would do! After serious reflection, I realized that while Jesus does indeed love his New Orleans Saints, he loves all the other teams too. No one holds the market on Jesus. He is the 'Go-To Guy' for anyone and everyone who invites Him into their lives."

As far as the team moving out of their cherished hometown, Clemenz is quite sure Jesus wouldn't be into that scenario at all. "I have nothing against Canada," he assured me, "but Jesus knows the Bills belong in Buffalo."