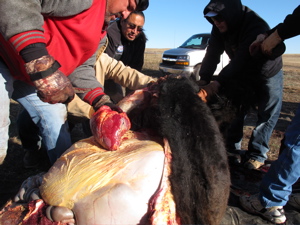 "They like to be on high ground, so they can keep an eye on us," said Mike Faith, vice-chairman of the Standing Rock Sioux Tribe. We'd driven close to a small herd of buffalo cantering around the top of a rise north of the tribe's capitol in Fort Yates, North Dakota. The rolling hills were the gold and amber of fall prairie grasses, and the early-morning sky was a brilliant blue. Eventually, the 80 or so animals halted -- the bulky bulls faced us squarely, broad foreheads slightly lowered, as the more diminutive cows milled behind them. A cool breeze ruffled their dark brown fur, which had begun to thicken for the winter.

With Faith was Ken McLaughlin, one of the tribe's long-time designated buffalo shooters, shown below right, and at the bottom of the hill were about 40 tribal members, including staff of the Standing Rock Sioux Diabetes Program and a dozen children each from Standing Rock Elementary School and the Boys and Girls Club of the Grand River Area-Teen Center. The tribe's Game & Fish Department had given permission for one buffalo to be killed in today's hunt, which had been coordinated by diabetes program staffer Aubrey Skye. 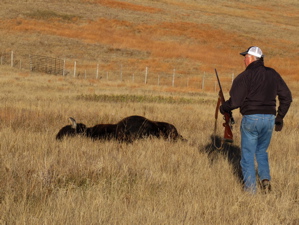 The program would distribute the lean, grass-fed meat to schools and tribal members to control diabetes, which they experience at among the highest rates in the country, according to the U.S. Centers for Disease Control. Anyone whose illness is advanced enough to require dialysis receives wasna, a traditional mix of finely shredded dried buffalo meat and berries that won't send blood sugar soaring, explained Skye.

"This is the natural classroom," said Faith, as we watched the buffalo. "It's so important for the children to learn right here on the prairie about these animals -- what we use each part for and how today they still keep both the people and the prairie healthy." He pointed to a cloven hoof print. "You can see their hooves press fallen seeds into the ground. They re-seed the prairie as they graze. They also eat a lot of woody plants, so they clean the prairie, ensuring a healthy mix of grasses and other plants." 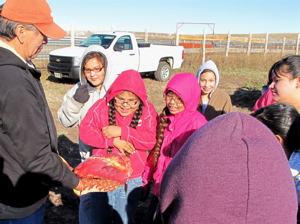 Faith and McLaughlin then conferred quietly. They wanted a young bull. "How about that one, with one horn up, one sideways?" asked Faith, and McLaughlin agreed. As if guessing the men's intention, the bull ducked back into the herd. When the animal trotted back out, McLaughlin took aim and, with one rifle shot, felled him, as the other buffalo scattered across the hilltop. The herd quickly regrouped about 100 feet away, stood shoulder-to-shoulder, heads up, eyes alert, to survey the scene -- and suddenly, in perfect unison, wheeled and galloped away. "We always use our best marksmen when we harvest an animal," said Faith. "We'd never want to have one run off, wounded."

Tribal members arrived with a pickup and trailer. John Buckley, head of the diabetes program, offered tobacco, stuffing some in the fallen bull's nostrils before it was loaded onto the trailer and hauled to the group waiting at the bottom of the hill.

As the head was sawn off and the field-dressing of the carcass got underway, the little ones and teens hung back. It's the 21st century, and Sioux children may be familiar with hunting deer and other game, but don't witness regular buffalo hunts, as youngsters would have in the old days. Most tribes are building up their herds -- there are 400 animals in four community-owned herds on Standing Rock, says Mike Lawrence of Game & Fish -- and the taking of any buffalo is special occasion. 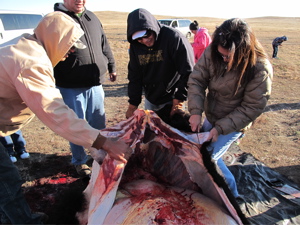 "This is the first time some of these children have seen a buffalo harvested," said elementary-school teacher Kimberly White Bull. "We brought them here because we want to be sure they're part of culturally related events like this." After observing from the sidelines for 30 minutes or so, the kids started pitching in, pulling hard on the hide so adults could use skinning knives to cut it away from the carcass, then tugging the rib cage open to make it easier to remove the innards, and eventually wielding knives themselves.

Everyone worked quickly, sharing the heavy labor. The carcass weighed 1,000 to 1,100 pounds, Faith estimated, and to remove the hide it had to be rolled from side to side, and at one point tipped up to a sitting position ("Everyone get behind and push!"). If one person tired, another stepped in.

Praise and humor flowed. "That's old-school!" said Frank White Bull, diabetes program fitness technician, as he admired elder Winona Eagle Shield's knife skills. A skinner joshed, "Hey, Kim, how come you're so good at this?" She responded, "Many deer!" Kids asked questions ("Is this a vein?" "How do I cut the stomach open? "What's all that green stuff in it?") and were delighted to touch the heart, pulled warm from the body ("Is it beating?" one asked, as others giggled). Everyone got a chance to try raw liver -- sweet, metallic-tasting and custardy-crunchy--a delicacy for the old-time hunters, who would eat it on the spot before packing up the dressed animal for the return to camp. It was a joyful community event, combining health, education and spirituality. 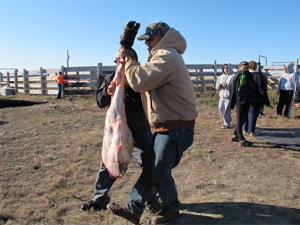 Eagle Shield, who volunteers at the Boys and Girls Club, laid claim to the stomach and intestines. "Now we know where to go for dinner tonight!" exclaimed Skye, shown left, who runs the Native Gardens Project, a division of the diabetes program. Through the project, Skye encourages tribal members to consume more of the produce that makes up a healthy diet. Each year, he tills about 125 home gardens around the 2.3-million-acre reservation, distributes seeds, teaches seed saving and food preservation and organizes forays onto the prairie to gather wild fruits and prairie turnips.

Skye had brought along a big pile of Hubbard squash for the club. "You can make that into soup to sell for your trip to Bismarck," Eagle Shield told the teens. A dearth of lunch places for the tribal workforce that shows up each weekday in Fort Yates is an opportunity for home cooks, who offer made-up plates at the tribal hall and other spots around town. 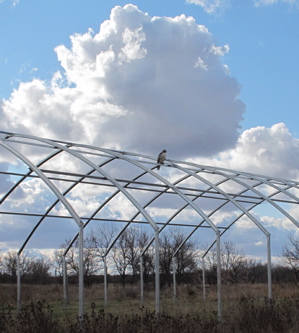 The gardens project Skye heads, which is in the third year of a five-year $100,000-per-annum grant from the CDC, also runs a weekly farmers market in Fort Yates that's advertised via flyer and radio. Tribal members whose gardens have produced surpluses, as well as a large-scale off-reservation organic farmer, Dwight Duke, shown below with Skye, offer fruits and vegetables at the market in return for cash or for USDA vouchers distributed to seniors by the tribe's Nutrition for the Elderly Program, run by Louella Harrison. "There was a line waiting for me when I opened at ten this morning," said a pleased Duke on a recent day.

The farmers market has also attracted artisans who've sold their work there and has presented lecture-demonstrations in topics such as drying wild fruits and prairie turnips, plant-medicine making, greenhouse operations and community supported agriculture, said Harrison, who hopes the Native Gardens Project will be able to open a second farmers market in McLaughlin, South Dakota, another Standing Rock population center. Eventually, Harrison said, she wants to involve more teens in gardening and marketing their own produce. It's about saving lives, she said. "We have a high teen-suicide rate, and this is such a healthy activity for kids," Harrison explained. "I'd like to see after-school gardening going on in youth centers around the reservation." 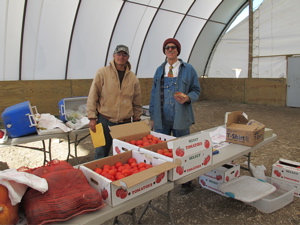 The healthful lifestyle being promoted on Standing Rock via many tribal projects, including the gardening and buffalo programs, descends from two historical Sioux economies. The Lakota/Dakota buffalo tradition is well known. When that ended with the massive federally sponsored buffalo slaughters of the late 1800s, the Standing Rock Sioux and other tribes confined to reservations along the Missouri River and its tributaries quickly replaced it with a less-well-known agriculture-based economy.

In fertile, tree-sheltered riparian areas, community members planted household gardens, gathered food and medicine plants, raised livestock and used driftwood and fallen timber for heating, cooking and building, according to an interview in 2000 with the late Sioux elder Philip Lane, who lived on the Standing Rock and Yankton reservations in the early years of the 20th century. Villagers supplemented those foods by fishing and by hunting deer and other game. In today's parlance, the newly created economy would be called sustainable, since it fit perfectly with existing resources.

That way of living continued until the 1950s, when the U.S. Army Corps of Engineers built giant dams along the Missouri and inundated the rich bottomlands. On seven Sioux reservations in Nebraska and North and South Dakota, the closing of the dams' gates created lakes that flooded valuable farmland, swept away thriving villages and forced families onto the windswept prairie, said Skye. Once self-sufficient, many Sioux were suddenly destitute, homeless and dependent on high-starch, high-saturated-fat government commodity foods. The low-nutrient fast food available during this era took its toll as well, and by the 1960s, diabetes appeared for the first time at Standing Rock, Skye said.

Modern foods are still causing health havoc. Soda pop is one of today's top drivers of diabetes, says diabetes program staffer Gerald Iron Shield, who conducts home visits to patients. Research bears him out. Scientists at the Harvard School of Public Health announced in 2004 that a large, decade-long study found those who consumed more than one sugared soft drink per day increased their diabetes risk by 80 percent, when compared to those who had just one soda per month. In contrast to those harmful sweets, Iron Shield said, traditional Lakota/Dakota treats included gathered fruits, such as chokecherries, buffalo berries and wild plums, which have healthy natural sugars and plenty of nutrients. "Avoid soda pop, and you improve your chances of avoiding diabetes," he said.

The CDC says maintaining a healthy weight is another major way to defend against diabetes. That's traditional, too, according to Skye. "When I give presentations to our people, I show them a photo of a large group of 19th-century Sioux chiefs," he said. "I ask, 'What do they have that we don't?' After the audience hems and haws for awhile, I say, 'Cheekbones.' Some of us have gained too much weight and have big, full fry-bread faces. If we want to be healthy, we have to eat right, acquire more of our food through energetic pursuits like hunting, gardening and gathering, and get our cheekbones back."

Returning to old-time traditions for nutrition, including the buffalo ways, is about restoring spiritual as well as physical health at Standing Rock, said Buckley, who recounted the assistance the buffalo gave humans when they first emerged on earth from an underground cave. "One of those who was still underground, Tatanka [buffalo], asked the Creator for permission to follow us up here and help us, and that's why we have been related ever since." At the very beginning of this buffalo harvest, Buckley pointed out, the group prayed to the Creator for help in carrying out their tasks in a good way. "For us, everything has a spiritual grounding." 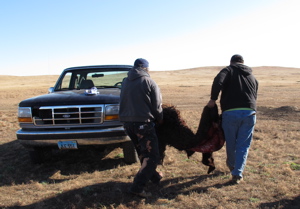 Back at the buffalo pasture, the young bull's carcass had been divvied up, and the major hunks of meat were on their way in the back of a pickup to a nearby USDA-approved meat-packing plant, where cuts would be processed before being handed out to tribal members. Just the skin remained. "A good hide for a vision," Buckley said. He and fellow tribal member Eliot Ward folded it lengthwise and, staggering under its weight, carried it to the back of Buckley's truck. Tribal members dispersed, returning to home, school or work, and all that was left on the prairie was the blessing.

Photos by Stephanie Woodard; for more stories like this one, see Reporting from Indian Country at stephaniewoodard.blogspot.com/