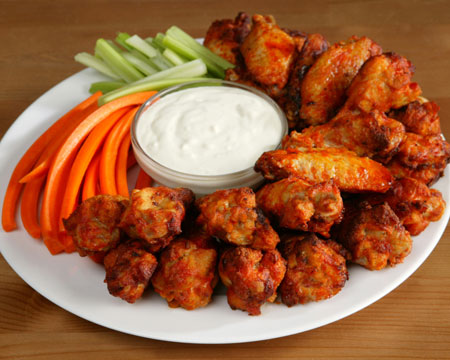 These days, you can get any kind of chicken wing your heart desires. Whether you're craving honey-glazed barbecue, teriyaki sesame or Jamaican jerk, there's probably a wing recipe for that, and it's most likely being served at your local sports bar. We're starting to see new and exotic variations of the beloved bar snack popping up everywhere -- ranging in taste, style and heat. With so many renditions available, we reminisced about the simpler days when a wing was just a buttery red mess known as a Buffalo wing. While others are out trying to break the mold with an innovative twist, we got to thinking, how do you make the perfect Buffalo wing? (Photo Credit: © iStockphoto/Thinkstock)

Click here to see How to Make the Ultimate Buffalo Wings

Invented in 1964, the Buffalo wing hails from, you guessed it, Buffalo, NY, and its history contains a mishmash of facts and various claims. The facts: The wings, which were usually just thrown out or used for making chicken stock, were transformed into a sticky finger food by Teressa Bellissimo, co-owner with her husband Frank of Anchor Bar in Buffalo. This is where the story gets messy (excuse the pun), because why and how Bellissimo came up with the idea of the Buffalo wing is up for debate. Frank claimed the creation was the result of the restaurant receiving an accidental shipment of wings, while their son, Dominic, argued that his mom whipped them up after being asked to make a late-night snack for him and his friends. There are even people who say the wings were created to be served as a gift to Catholic patrons late on a Friday night when they were able to eat meat again. Since the members of the Bellissimo family have since passed away, we may never know the exact origin of the famed bar food.

Click here to see How to Make the Perfect Nachos

We hate to be the ones to say this, but who cares about how or why they were created -- just tell us what makes them so delicious. After The Daily Meal reported on an annual wing competition that takes place in New York City every fall, Wingfest, we became wing-obsessed and were inspired to explore the art of making a Buffalo wing. Once we finished grilling our friends and the executive chefs of hallmark New York City wing spots such as Wildwood BBQ, Duke's, and Tribeca Taphouse about this year's competition, we digressed into a conversation about what makes the perfect wing and obsessed over every little detail. Our sources had some pretty good hints to share, and they coached us into crafting the Ultimate Buffalo Wing Recipe.

More from The Daily Meal:
10 Expert Marinade Recipes From The Pros
6 Most Common Kitchen Injuries and How to Prevent and Treat Them
Every Taco Recipe You'll Ever Need
Ultimate Guide to Pies
19 Crops That Would Disappear Without Bees

How To Make The Ultimate Buffalo Wing
More:
slidepollajaxCollege FootballwingsFootballRecipes