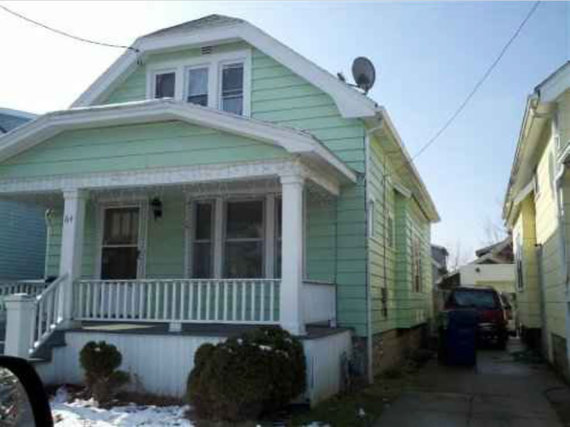 "When I got the offer, I actually cried. When my lender called and said they were willing to work with me, I made up my mind that whatever I needed to do, I was gonna do it."

Two years ago, Laesther Jones, a single mother of five from Buffalo, New York was diagnosed with breast cancer and had to leave work. She, like thousands of other Americans with extraordinary medical bills, fell behind on her mortgage payments. By most estimates, medical expenses lie behind over half of bankruptcies and foreclosures in the United States, even among those with health insurance.

Mrs. Jones's situation got so bad that she tried to sell the house that she'd lived in for eight years, putting further strain on her and her family as she dealt with her cancer.

However, Buffalo's housing situation is dire, especially in predominantly minority neighborhoods. A 2013 report from SUNY Buffalo found that more than half of "unfinished foreclosures" in Buffalo were located in African-American neighborhoods. As home values erode, some lenders abandon foreclosure actions and write-off mortgages. With both the homeowner and mortgage holder walking away, no one is left to take care of the unwanted homes. These vacant homes hurt property values and can contribute to crises like that faced by Mrs. Jones.

In fact, 14% of homes in Mrs. Jones' zip code (14215) are vacant. Even worse, 26% of the homes in the neighboring 14216 zip code are vacant. That is one in four houses that are abandoned, dilapidated, and lowering property values for everyone else. To make matters worse, the rate of foreclosure in Buffalo actually went up by an astounding 223% between 2014 and 2015.

The effects of all these vacant homes are devastating. Vacant buildings can become hotbeds of criminal activity; studies have shown that vacant houses can incubate prostitution, drug use, and gang-related activity. Buffalo's crime rate is 1,200% higher than the national median, averaging 395 crimes to person or property per square mile, and the high number of vacant homes is contributing to that. In addition, vacant buildings discourage new business from investing in impacted communities, further hindering recovery and development.

Mrs. Jones' story is a reminder that all over the nation, many homeowners and communities - particularly low-income and minority neighborhoods - continue to face difficulties. Lower-value homes are ten times as likely to be seriously underwater - just like Mrs. Jones' was - than high-end homes.

What is being done about these issues? American Homeowner Preservation is one solution. AHP crowdfunds the purchase of nonperforming mortgages in low-and moderate-income communities nationwide. These loans are purchased at significant discounts, which allows AHP to offer sustainable solutions to keep families in their homes.

Legislation to create a registry of vacant houses is enacted or proposed in many jurisdictions, although the degree to which this would help is uncertain, as studies into the matter have discouraging results. A study published in 2016 focusing on Chicago, for example, found that reporting vacant homes to city authorities did little, if anything, to reduce crime in areas surrounding the vacancies.

One measure that may help Buffalo's situation is legislation that would streamline and simplify the foreclosure process for vacant properties. New York's average foreclosure length is the second-highest in the nation at a staggering 986 days. Long, drawn-out foreclosure timelines are a significant contributor to the glut of vacant homes in many challenged communities.

Mrs. Jones's story, at least, had a happy ending. American Homeowner Preservation accepted $2,000 to settle nearly $6,000 in delinquent payments and forgave the difference, reduced the $40,000 principal balance to $23,000, and fixed the monthly payment at $147 for the remaining 21-year term. This may sound charitable, but consider that AHP paid $6,405 for the mortgage, already has $2,000 back, and will receive $1,764 annually for the next two decades.

For Mrs. Jones' five children, two of whom are under 18 and still live with her, the ability to stay in their home while their mother recovered was "a blessing."

With the enormous burden of losing her home off of her back, Mrs. Jones is now able to focus on her recovery. Today, she is in remission and can confidently say that, "Everything is fine."

With her long nightmare coming to an end, Mrs. Jones is hoping to do some remodeling on her house. "That's my next step. My first step was just saving my house. Now I can do the repairs I need to do because I have my house back."

When asked if there was anything she wanted to say to anyone out there who might be going through a similar situation, she did not hesitate. "Always communicate," she said. "Explain to them your situation and what you're going through. There are people out there willing to help. For a long time I thought it was just me, but my loan was finally sold to a lender which helped me save my house. Having that line of communication open, talking back and forth, getting a game plan together and moving forward, has got me in a good place now."

"Always communicate," she repeated with a laugh. "And pray."