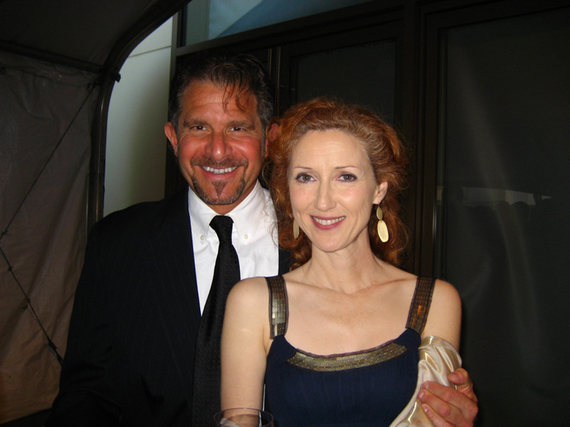 I feel ignored when I attend Hollywood parties. Not that I go to many, but whether they're classy events or casual affairs, I'm bummed at being shunned. At least for a bit, until I see a cozy spot near a welcoming buffet. It's only then that I feel I'm in good company, even if I'm simply among vegetables and crudité.

At a recent event I was tired, having flown in from NYC where I visited my folks. I assumed the position by the dip and chips, content to be the proverbial fly on the wall, which for me is an entertaining vantage point. While I can socialize and entertain fairly well, I only have so much of a personality to go through in a day, and it had expired just getting through LAX.

My tolerance was exhausted within ten minutes by the rare eye contact; by peoples' heads on a perpetual swivel looking to see who's entering and if they're more important to talk to than the person they're half-heartedly listening to; and by the tight tuxes, tight shoes and even tighter faces.

I headed for the food table where occasionally I meet kindred spirits - the others in the group who are more comfortable nibbling than schmoozing. One guy I met was from New York, who saw me standing at the table munching on a celery stick I had stuck in some dip.

"This seat taken?" he asked with a smile, as he sidled up next to me and reached for a dressed-up Triscuit.
"A fellow New Yorker! Got your name on it."
"My accent's that obvious?"
"Takes one to know one. Long Island: born and bred."
He extended his hand. "Queens: born and bled."
We were really hitting it off - until his date came over and dragged him away to be introduced to someone who could help her career...leaving me alone to move onto the carrot sticks.

Striking out on the kindred spirit deal, I sorely wished that I could be with my wife but she was involved in a business chat in the adjoining room. Besides, I didn't want to lose my place at the buffet.

Two Hollywood movers and shakers jaunted over to the table, barely acknowledging me with an abrupt nod before turning their attention to the entrance.
"Hey, isn't that what's his name, the actor?" Mover asked.
"Used to be," Shaker answered as he grabbed a handful of crackers.
"He's not acting anymore?"
"No, he doesn't look like him anymore."
"That's not nice," Mover said, staring more intently at the actor.
"I know, right?," Shaker said, chomping on the crackers as an exclamation point.
"I know, right?" Mover agreed as he chomped on a chunk of Brie.
I was ready to say something...but I knew it would have been wrong.

A 30-something woman who had the promise of a kindred spirit came over to where I stood. A non-threatening looking natural blonde...un-natural at this party, she extended her hand. "Hi, I'm Judy. And you are?"
"Tom. Pleasure, Judy."
"What do you do, Tom?"
"I'm a multimedia writer and..."

"Cool! I know lots of writers out here and as a matter of fact I have a meeting with two writers tomorrow morning along with my agent who says the ideas I have for a one-woman show are right up their alley and I'm soooo excited because I've been working on that show for three-and-a-half-years and I feel I'm getting soooo close and that we'll also be getting a producer acquaintance of my former manager who's no longer in the business due to hives he gets from the stress of not having enough clients but he keeps his eyes out for me because he says I have the kinda talent that doesn't come easily and...wow! That's a former actor I worked with on an indie film like four years ago which might be coming out next year and he's up for an under-five on a soap that I auditioned for two years ago and nearly got but they went with someone offbeat in looks and ohmygod there's my agent! Nice talking to you, Tim."

I was about to correct her but she was gone faster than I could say, "Tom."

I could take or leave this party but not without my wife. Since she was still wrapped up in the business chat, I headed over to the dessert table and in a peaceful setting...I partied with the pastries.