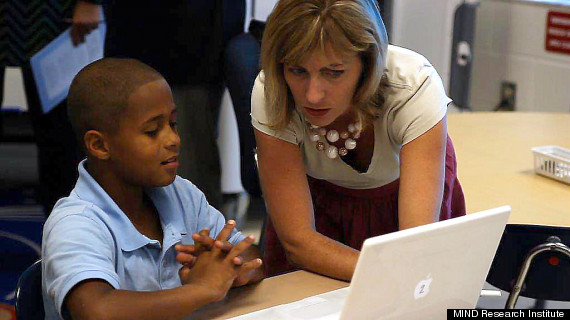 A student in Clearwater, Florida gets a boost in his early math education thanks to a public-private partnership that brought the ST Math blended learning program to his school.

Ask yourself this simple question: Would you consider building a new home before laying the foundation? Hardly. So why is it that anyone would believe the time to address the current challenge of education for our children today is to start once their life structure is mid- to near completion? As a country, as individuals, as institutions, associations or organizations we need to begin at the beginning. As Dr. Martin Luther King Jr. so eloquently stated, "We are now faced with the fact that tomorrow is today. We are confronted with the fierce urgency of now."

I recently had the good fortune of being invited to a Foundation Center summit in Washington, D.C., that addressed the plight of black men and boys. As a lifelong education advocate and the mother of a young black man, I was personally and professionally invested in the conversation. While sitting there I was struck by the intense desire of organizations across the country invested in putting forth solutions or funding initiatives to address the importance of promoting black male achievement. The speakers challenged the audience to stand up and make a difference. To let our collective voices be heard. To raise the bar.

All worthy and aspirational goals but the questions remain: "who?" and "how?"

Educators in this country speak ad-nauseam about algebra being the gateway course to future success in math and other STEM (science, technology, engineering and math) fields. There is, however, a direct correlation between how you lay a foundation for a home and how you lay a foundation for excellence in math. While we struggle to solve the algebra crisis, I would posit that if the love of math doesn't begin at an early age (and I mean Pre-K through the elementary years) there is no foundation upon which to build. For those students, algebra will remain a bridge too far.

The Council of the Great City Schools in 2012 reported that "black boys on average fall behind during their earliest years." We seem to place our emphasis on the challenges of teens in middle and high schools around the country. Yet by eighth grade, only 10 percent of black boys in large cities are proficient in math (compared to 44 percent of white boys nationally), according to a 2010 study. We are getting them ready to take algebra by offering bridge programs, supplemental programs and readiness/remediation programs. So often I hear of new STEM programs geared for middle schools and robotics programs aimed at high schools. These are all great efforts, and I applaud them, however the students that these efforts usually attract already have some level of proficiency in math. What about all the other students? The ones who didn't develop a love for math in their early years? The ones who got left behind?

I visited a historically black college & university (HBCU) campus at the end of the same week that I attended this summit. The ratio of young men to young women was just slightly shy of alarming. Actually, it was dumbfounding. Just 39 percent of all HBCU students are black males, according to the White House Initiative on Historically Black Colleges and Universities. There is a silent but growing rate of scholastic genocide among young men of color. And while there are positive trends in funding programs that can positively impact the lives of these kids, the majority of them don't address real solid education -- and they don't address them early enough. There is one place that the majority of kids are for a good portion of every year: school. If we can provide the right instruction, the right way, in the right place, and at the right time -- we might just see this through to a positive end. Or in math terms... we can increase the probability of a favorable outcome.