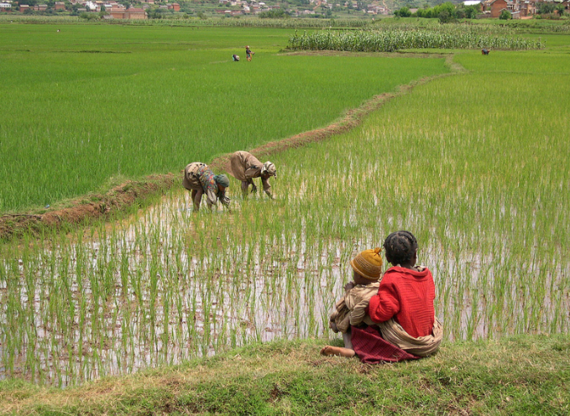 The discussion around climate change has been a long and exhaustive battle, but this year signals a turning point. Heads of state from all over the world, including the US and China, gathered at the UN Conference on Climate Change (COP21) in Paris between 30 November to 11 December 2015. This meeting appears to be the beginning of a dramatic change from business as usual to building concrete plans to mitigate climate change. It is important to note that it's not only up to state leaders to make a commitment; initiatives such as the 'Compact of Mayors' also show how local city governments are dedicated to tackling the issue.

But have these leaders considered how nutrition factors in? Cities are in a unique position to tackle both climate change and nutrition. The majority of greenhouse gas emissions (70%) come from cities and by 2030, there will be 5 billion people living in urban areas. It is estimated that 90% of this growth will take place in Africa and Asia, while the fastest growing cities will be small, and medium sized. Now is the time to build sustainable, efficient, and nutritious food systems before these new and expanding cities are locked into energy intensive, polluting infrastructures.

Nutrition is one of the Sustainable Development Goals (SDGs) because almost every country in the world has a nutrition problem. Many rural and urban poor, especially those that live in slums, which are almost 1 billion people, still suffer from undernutrition such a stunting. Stunted children at the age of two are unable to reach their full potential, which has long-term effects on their physical development, health and productivity. However, the rise of cities has led to new consumption patterns and an obesity epidemic. Many also suffer from the double burden of malnutrition where individuals are afflicted by over and undernutrition. Rising obesity is also correlated with rapidly rising non-communicable diseases like Type 2 diabetes. By 2040 there will be 642 million people with type 2 diabetes, 70 percent of whom will be in cities, mostly in emerging countries. In this context malnutrition will have a growing impact on health expenditures; already 12% is spend globally in diabetes and as much as 20% on overweight and obesity.

To find sustainable solutions for improving nutrition, we have to focus on all systems (food supply chains, sanitation, transport systems, etc.). This involves taking into account future trends such as rapid urbanization, rising obesity levels, and an increased risk of worsening climate change. We still do not have a clear picture as to what climate friendly sustainable and nutritious urban food systems should look like.

We do expect that the poor will be hit hardest by climate disasters; 80% of people who suffer from hunger live in disaster prone areas. As low and middle-income countries become more urbanized and people move away from producing their own food, international trade becomes increasingly important. Long, complex supply chains can be highly energy intensive. When people are hit by climate shocks, access to these supply chains becomes difficult and the urban poor will be more affected.

Floods can contaminate water sources, particularly in overcrowded slums, which can lead to diarrhoea and other infectious diseases that negatively influence nutrition absorption. Natural disasters can break rural-urban linkages; making it harder for city dwellers to access nutritious foods and for rural inhabitants to earn an income.

It is critical that we improve rural-urban linkages to create more resilient and sustainable local supply chains. In this way, by combatting climate change we can help win the fight against malnutrition as well.
The food system contributes 19-29% of total greenhouse gas emissions. While in low-income countries this comes mainly from agriculture, in high-income countries half of this can be attributed to transportation activities after the food has left the field.

High-income countries are starting to invest more in a green future. The Netherlands is aiming to become the first circular hotspot, which is the notion of closing the loop by making waste at the end of the value chain a valuable resource. Its cities are also playing their part; Amsterdam has set up a Start Up In Residence program incentivizing start-ups to make Amsterdam a more circular and healthy city. Middle-income countries must take action now to build better food systems and learn from high-income countries, for example through urban vertical farms utilizing hydroponic techniques that are less resource intensive and reducing emissions and waste along longer supply chains.

This will be the first time in our history that rising urbanization will not automatically be associated with improved health outcomes. We need to begin constructing a new paradigm for climate friendly sustainable and nutritious urban food systems. The SDGs and COP21 are important tools to achieve this. We must support low and middle-income countries to develop this new paradigm for cities. Focusing on sustainable urban food systems in these countries will be essential for the world to achieve many of the Sustainable Development Goals.