"We are not buildings artists; we are buildings leaders in society."

These stirring words of Juliano Mer Khamis, the charismatic founder of The Freedom Theatre (TFT) in Jenin refugee camp in Palestine, are coming true, despite his assassination five years ago.

Against all odds, The Freedom Theatre, a beacon of creativity, discipline, and vision located in the heart of Jenin refugee camp, recently celebrated its tenth anniversary. Known for its fierce fighters and its conservatism, Jenin refugee camp, where over 16,000 live on one square kilometer, increasingly is known as well for its art.

Juliano Mer Khamis returned to Jenin during the second Intifada to find his mother's Stone Theatre (Arna's Children tells her story) reduced - like so much of the camp--to rubble by Israeli tanks, and many of his mother's student actors killed. In 2005 he joined forces with Jonatan Stanczak, currently Managing Director of TFT and Zakaria Zbeidi, a "Stone Theatre child" turned head of the Al-Aqsa brigades in Jenin, who later renounced militancy for cultural resistance. Together they rebuilt a theater in the camp, which evolved into The Freedom Theatre.

Mer Khamis urged his acting students to wage a cultural intifada, warning that the occupation of the mind was more dangerous than the occupation of the body. Unlike many charismatic leaders, Mer Khamis developed an institution, not a cult of personality (even though he was adored). Following Juliano's untimely and unsolved murder in 2011 -- he was shot sitting in his car just outside the theater, with his infant son in his lap - the devastated theater soldiered on, a living testament to the powerful impact of his teaching and vision.

Ahmad Matahen, age 24, a typical "child of The Freedom Theatre", explained to me. Matahen joined in 2006; first as an actor, then as Juliano encouraged him to discover and exploit his individual talents, he moved into technology, engineering and stage design. He now studies stage design in Bethlehem, with the support of TFT, where he hopes eventually to work.

What a different future than Matahen might have had, if Mer Khamis had not invited in this street youth who had mocked the theater, and expressed his anger and frustration by throwing rocks at Israeli tanks. Matahen described the common attitude in Jenin:

"When you go to the camp and ask people what they want, they say they want to die. They have no jobs, no hope."

When asked what he missed most after Juliano's death, Matahen said "hugs", something no one besides Juliano gave him. As a teenager, Ahmad, like so many of his contemporaries, saw his friends killed by the invading/occupying Israelis. Considered against the backdrop of trauma that pervades the camp, hugs are no small thing. They form the foundation for the self-confidence and sense of purpose that Matahen has gained from The Freedom Theatre.

High school dropout Ameer Abu Alrob defied his family and left his village to live and work at The Freedom Theatre. He traveled to India last year with a TFT group that also included two female acting students, for a ground-breaking, three-month Palestinian-Indian collaboration and tour with Janam Theater. Ameer and half of the other Palestinian student actors had never previously traveled outside Palestine, much less flown in a plane.

Through his experiences Ameer is not only broadening the horizons of his family and village, but, importantly, also introducing them to their own history through The Freedom Theatre productions such as The Siege. (One of the reasons Ameer dropped out was that school taught him nothing about his own environment and history).

Performed to date in Palestine and Great Britain, The Siege brings to life on stage the incident in 2002 during the second Intifada when armed Palestinian fighters along with some two hundred Palestinian civilians escaped the onslaught of Israeli gunfire and tanks by taking refuge in Bethlehem's renowned Church of the Nativity. The trapped Palestinians - without food, water, or medical supplies - struggled to remain "steadfast". After thirty-nine days, they surrendered, responding to the plea of a young mother whose baby's life was at risk because the siege prevented her taking the infant to the hospital.

This decision, which reflected the fighters' firm belief that the goal of their struggle was to help the Palestinian people, cost the insurgents dearly. In a European-brokered deal, they were exiled immediately upon exiting the Church -- some to Europe and some to Gaza -- with no hope of return (even though the European exile was supposed to last one year).

Nabil Al-Raee, The Freedom Theatre's artistic director, explained that he wanted to re-open this important incident to present the Palestinian side, absent in the media. "This is the first time that we speak about these freedom fighters and tell their stories." One and a half years of research, with travel to Europe and skype conversations with Gaza to interview those in exile, including personal friends of Al-Raee's, were distilled into a visually stunning and dramatically taut production. 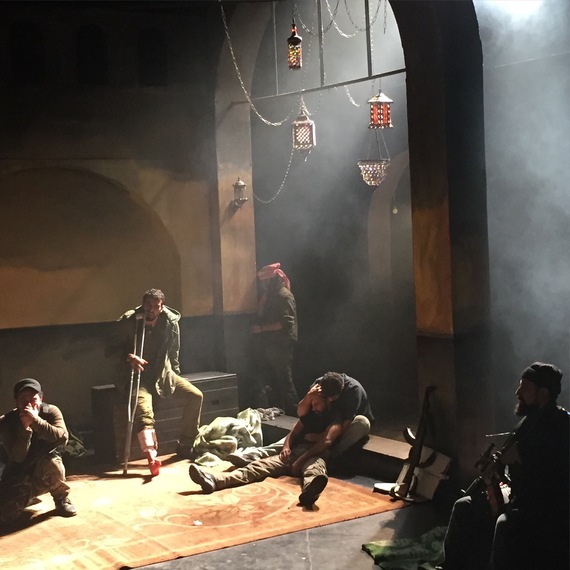 "The lesson of The Siege was putting weapons down,"

according to one of the actors, Faisal Abu Alhayjaa, referring to the essential humanity of the Palestinian fighters, who would not harm a sick child for the sake of their cause.

This powerful message apparently was lost on New York's acclaimed Public Theater which cancelled the production scheduled for this May. This alarming trend of performances cancelled/censored (take your pick) for political reasons will be examined at a conference at Georgetown University this June, where Al-Raee will speak.

Undeterred, The Freedom Theatre and its resolute supporters currently are seeking other American venues for The Siege. While some may see Palestinians on stage with machine guns, others, including sold-out audiences during The Siege's recent British tour, see, in the words of the Guardian review, "an unexpectedly compelling theatrical experience with a rough and ready energy, and in the very act of its telling, speaks for the voiceless and forgotten".

In the tinderbox that is Israel-Palestine, The Freedom Theatre defies its seemingly hopeless environment, and is making a tangible difference in Jenin camp and beyond. Another child of the Theatre, an actor in The Siege and in the forthcoming feature film The Idol, Ahmed Al Rokh, described the change.

"We can feel the difference in the camp. Our audience is growing because the kids who first came now have families, and bring them. Now they understand that the theatre works for us and with us."

In contrast to the situation in the developed world, where art is often considered discretionary, Faisal Abu Alhayjaa described art and culture in Palestine as "essential like water and bread". Inspiring as it is, The Freedom Theatre's story is not unique. The Palestinian Performing Arts Network (PPAN) includes many ensembles and organizations striving for dignity and agency through art.

Abu Alhayjaa sees the education and empowerment that comes through working in the arts generally, and The Freedom Theatre specifically, as vital to Palestine's future.

"If there will be a liberation for Palestine, it will come with a generation that knows what they want, and that knows to think critically."

That generation is being trained at The Freedom Theatre.

Ambassador Cynthia Schneider writes about and directs projects in culture in diplomacy, from Timbuktu to Washington DC.