By Winsome Leslie and Ralph Denizé

Winsome Leslie is the Multilateral Investment Fund's regional supervisor for the English-speaking Caribbean and Haiti. Previously, she was the economic attaché at the Embassy of Jamaica in Washington, D.C. She holds a PhD in international relations from Columbia University.

It is widely accepted that access to basic services is a key aspect of improving the lives of individuals at the base of the economic pyramid in any country. Unfortunately, basic services in Haiti are an outlier in two respects when compared with the rest of the Americas:

It goes without saying that this situation has significant implications, not only for the well-being of Haitians, but also for the country's long-term development. The host of challenges include: a lack of quality services; except for education, the public's general lack of willingness to pay for services, because the markets are distorted; little coordination between the various public- and private- sector stakeholders providing services; and government difficulties in adequately regulating the sectors. These challenges, while daunting, nevertheless present opportunities to begin creating meaningful and lasting change in the lives of the majority of Haitians, as we discussed in a previous blog post.

Basic services in Haiti are heavily dependent on external assistance, with all the major bilateral and multilateral donors financing interventions--mostly in cooperation with the Haitian government--in the sectors of health, water, sanitation, education, and, to a lesser extent, energy.

Health. The Multilateral Investment Fund (MIF), in coordination with the Inter-American Development Bank (IDB), two years ago approved its first project in the health sector, Carte Avantage Santé, to provide a suite of basic health care services to low-income people in Port-au-Prince.

Water and sanitation. The World Bank has been working to improve access to water and sanitation services in rural areas in southern Haiti, in partnership with the state-owned water and sanitation agency, DINEPA. The MIF is also indirectly supporting access to clean water, through an investment in the Leopard Fund, which in turn has invested in DLOHaiti, a start-up that is providing safe drinking water to underserved populations via a network of kiosks outside Port-au-Prince. The kiosks produce purified water on site and distribute it through various channels to surrounding communities, including schools.

Education. Through its All Children Reading project (Tout Timoun Ap Li or ToTAL), the United States Agency for International Development (USAID) has developed a teaching model to improve reading skills for elementary school children (grades 1-3 in Port-au-Prince, Cap Haitian and Saint Marc). The idea is that this will be the basis for a broader initiative to reach more than 1 million children in the country, with the help of other donor partners. 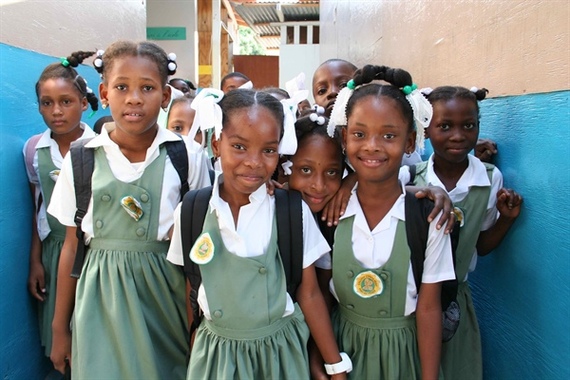 Efforts such as these are an important beginning, given the extent of the task at hand. All donors have a role to play, particularly those that target small actors and individuals at the grassroots level. But, what about donors who are relatively inexperienced in basic services, such as the MIF? With their relatively small interventions, in such a complicated sector, with different dynamics at play in each sub-sector, how can these donors make a difference? Here are some ideas, based on the MIF's experience in other sectors:

Have a narrow focus and identify "quick wins." Target one or two aspects of basic services initially as an entry point to the broader sector--such as education, where population coverage is high compared to sanitation and water and where willingness to pay (a major challenge) is not an issue. Support and enhance existing models that have been already tested in the market, albeit on a very small scale, to increase the likelihood that these models will act as a catalyst to bring about larger-scale change.

Increase impact by developing a cluster of projects. Use the initial intervention(s) as a basis to develop a group of projects that tackle either access to service, or quality of service, or both. Base the types of projects on needs articulated by prospective beneficiaries, the government, stakeholders in the sector, and prospective donor partners, as well as on research to verify market dynamics. This approach will increase the chances that the projects will teach us what works in Haiti. This knowledge in turn can be used to inform both the replication/scaling up of existing projects, and the design of new projects.

Bring in strategic partners. Teaming up with likeminded partners with common interests will both leverage resources and increase the prospects for expanding and replicating successful interventions. This also can lead to deeper collaboration in the same sector, or in other areas.

Be flexible. Recognize that different dynamics operate on the ground in each subsector in basic services. There cannot be a one-size-fits-all approach. It important to remain flexible and be able to design interventions so they can be adapted to changing market conditions at the local level, and produce knowledge that will inform the design of future projects.

Consider how to make projects sustainable from the outset. In order to ensure that projects continue once donor funding ends, take action to meaningfully involve the local community and secure buy-in at the local level at the beginning of designing projects. Skills, technology, and other tools must be transferred to local stakeholders, through train-the-trainer and other similar approaches.

Ralph Denizé
Ralph Denizé is in charge of the Multilateral Investment Fund team in Haiti. He previously worked for the University of Ottawa and the United States Agency for International Development (USAID). He holds a master's degree in engineering management from Northeastern University.