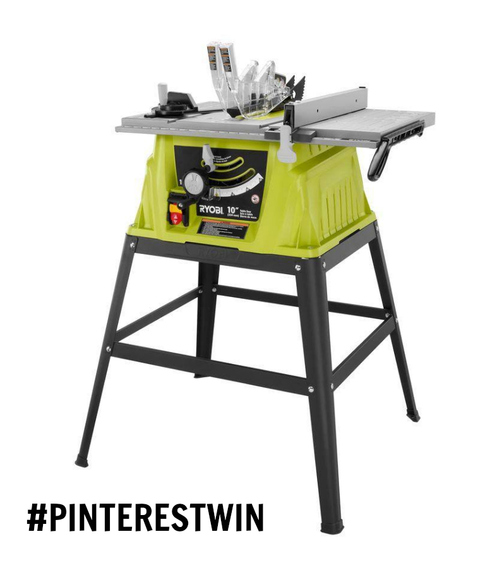 Danger lurks in every corner of Pinterest. From the marshmallow butterfly cupcakes for your daughter's fourth birthday to the plethora of things you can do with Ball Jars to make your décor both more rustic and romantic. The #pinterestfail hashtag should serve as warning, but like most people caught in the thralls of Pinterest DIY Induced mania, I ignored logic and my current skill set and entered the search term: DIY Pergola.

Appalled and dismayed by the price points of pergola kits compared to the paltry amount of wood they contained, my despair dissipated when I saw the magic words:"we spent roughly $400" on a pin from Myfrugaladventures.com.

But I needed more detailed plans than the frugal adventurer provided. This lead me to Ana White and her Weatherly Pergola and excellent detailed directions.

Equally swayed by the low price, my non-handy husband agreed with me. Compared to the three thousand price tag of a pre-fab kit, four hundred dollars felt like nothing.

"What do we have to lose?" we repeated to each other.

Armed with my print out, I went to the local lumberyard to price out the wood. I thought for sure it would cost more than the home improvement center and found myself beyond surprised that they had lower prices and could deliver--that same afternoon. Feeling smug, I placed my order, running down the list of supplies from the print out until I got to nine 2x2 boards.

"We don't carry that size," the sales clerk said.

I scanned the directions. Apparently, Ana White planned for this. Her note read, "If you can't find 2x2s, buy 3 - 2x6s treated and rip the 2x6s into three 2x2s per board using a table saw."

"Okay," I told the clerk, adding the 2x6s to the order and a table saw to the list of things I would need to buy.

When I got home, I sent my husband this video, Table saw Ripping - How to Have NO ANXIETY on the Table Saw, without any further explanation. I figured he would use the saw, and I wouldn't have to worry about. At least, I hoped so. Power tools scared me.

I was too, but I didn't mention it. The table saw with its blade all exposed and toothy frightened me. With all the supplies purchased, it seemed poor timing to admit a deep-seated fear of using power tools.

Saturday dawned, and we started the process of "building," which actually meant digging. A kind neighbor dropped off a one-man auger to help us get the holes for the posts that would support our pergola. Despite reading an internet comment the night before that an augur "can rip your arms off at the shoulders," my husband embraced the machine and its possible labor savings.

He impressed me with his willingness. And I was jealous of his pluck. After struggling with the choke setting, he fired that augur up and owned it. And it made the digging easier. I thought there might be something to this tool thing after all. I thought he was going to be great with the table saw! At least that didn't threaten to rip your arms off -- just your fingers! 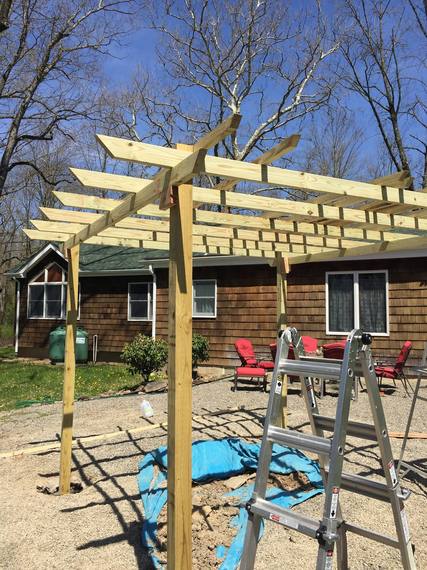 While my husband started putting together the lovely table saw, I sank into a chair and trolled through my phone; the table saw was going to be his and his alone to use. But the directions weren't that great, and he needed a second set of hands to line up the base, so I put down my phone and started to help.

As we assembled the saw, adding the safety features to keep you from sticking your hands too close to the blade and keeping the wood from flying back at you, the mystery of the table saw unfolded for me. I could see how it worked. You set the guide here. You pushed the wood here. You used the push stick and not hands! While I couldn't have articulated the purpose of all of the parts and pieces in any intellectual fashion, after putting that saw together, I "saw" it. And part of me wanted to try using it.

"Do one thing a day that scares you," said Mary Schmich in a viral essay in 1997, though the idea is attributed in some cases to Eleanor Roosevelt. I thought about that as I considered the board we needed to turn into three. Did I mention it was 12 feet long? And power tools scared me. And I wasn't sure if I agreed with Schmich or Roosevelt. I'm afraid snakes, too, and I'm never going to do anything with them. Never.

But the board was 12 feet long. A two-man board. I couldn't just let my husband operate the table saw alone. It wasn't physically possible. On top of that, it made practical sense for him to hold the heavier end of the board and for me to push it into the blade. I had to face my fears and use the damn tool.

So we set up the table and positioned the board. I hit the on button on the saw and jumped with fright at the noise. I flicked it off just as quickly.

"You scared yourself," he said.

I didn't want to point out that the saw scared me. It seemed pedantic to argue the point right then. Instead, I turned the saw back on and started pushing.

And it worked. A 2x2 board ripped out on the other side. But more interestingly, I liked it. And I didn't slice my fingers off!

We finished ripping the boards, and I couldn't stop smiling. Even with all the other things we accomplished that day from pouring concrete, to digging holes, to leveling girders, using the table saw soared above those accomplishments. I'm not afraid of digging or concrete or levels. I was afraid of power tools. Or rather I was. My newfound confidence extended to the miter saw, and I gave the drill a whirl.

I can't say for sure if this lesson in tackling fear extends beyond power tools, but I am willing to keep giving it a try (except for snakes -- I meant what I said about snakes). But other things I am afraid of they are all on notice. What do we have to lose indeed?

And while I can't take a picture of the goodwill and self-esteem I earned ripping that twelve foot board to build a pergola, this one gets pretty close: 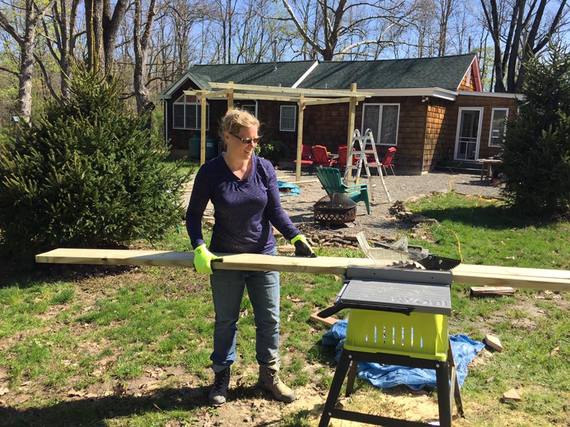 Note: Before I get all kinds of safety warnings, we stopped the saw to take to the picture. I may be a power tool newbie facing fears with abandon, but safety comes first!