International Medical Corps' Dennis Walto details the organization's approach to delivering sustainable, humanitarian support in the field. Having worked since 1984 to provide health care and training to devastated populations worldwide -- particularly in fragile states -- International Medical Corps has been at the forefront of the campaign to achieve the MDGs by 2015. The organization's emphasis on building resilience through training and community education has contributed to reducing child mortality through programs including primary health care, nutrition, water, sanitation and hygiene, among others.

Standing at a well in Damot Pullasa district in Wolaita zone, southern Ethiopia, a local water committee representative -- Feleke -- is explaining to community members how a hand pump works. Feleke tells the crowd that the water committee had recently repaired the well, which had been broken for about a year, forcing women and children to walk several miles each way to fetch clean water. That three or four hours a day can be the difference in a young girl going to school or walking to fetch water. Feleke reminds everyone, especially the men present, that girls need to go to school. Feleke continues his narrative, but despite the fact my translator is keeping up with his talk, l have momentarily drifted away ... 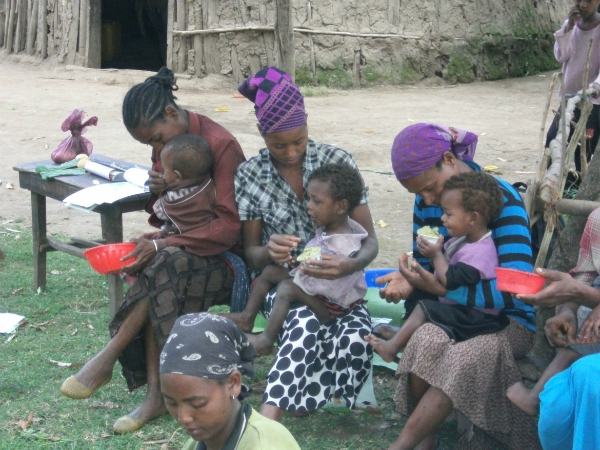 It's June 2013 and I am visiting an ECHO-funded program with my colleagues from International Medical Corps to learn how the organization's new "resilience" programming works. This new initiative integrates nutrition, clean water, hygiene, and primary health care information and services, and works with local government partners to deliver these services to schools, health clinics, community centers, and other places where families gather -- all critical components to reducing child mortality.

And while I am trying to pay attention, I am struggling with the fact that something is different. Maybe it's the way the stories are told, maybe it's the stories themselves, or perhaps the storyteller -- or a combination of all three -- but the mixture of local leadership and possessive language being interpreted makes me pause. I listen again, "...an NGO constructed this well more than 15 years ago," Feleke says as I again pick up the translated thread, "...but now it is ours."

That's it. There's the difference.

Ten years ago, it was someone like me -- an aid worker from the US -- speaking in English with a translator sharing the information with a larger group. Now it's the opposite -- it's Feleke doing the talking and I who need the translation. And I suddenly realize - we, the "practitioners," don't own this anymore. Not the wells, the water nor the health outcomes. We no longer direct the trained nurses, the health centers with new latrines and running water nor the wide-scale vaccination initiatives. The health and wellbeing of Ethiopia's children clearly belongs to Ethiopians. Yes, International Medical Corps has a role to play, but that's it - a role, a supporting role, not the leading role.

Away from the water well but still in Damot Pullasa district, where not so long ago there stood a tent staffed by expatriates treating malnourished Ethiopian children, there is now a nutrition stabilization center, staffed entirely by Ethiopians. It's a permanent fixture. In this facility, Ethiopian health professionals educate mothers on healthy feeding practices and screen and treat malnourished children. At present, the stabilization center has no cases since most nutritional interventions are community-based and operate at the household levels -- another positive indicator of just how well the new systems are working.

In nearby Boloso-Soro district at a gathering of children and moms, the discussion is structured around locally available nutritional products and practices that can prevent malnutrition. The meeting is part of International Medical Corps' facilitation of "PD Hearth," a community-based practice that identifies a positive role model -- usually a local mom of similar economic and social means in a village - who then trains other local moms whose children have suffered from malnutrition. This "lead mother" shares her experience in using local methods, products and health practices to keep her children healthy, educating other mothers so they can do the same. Some of the information and best practices being shared have been provided by International Medical Corps, but the role modeling and peer-based learning could not be more locally driven. The moms learn about the benefits of early and exclusive breastfeeding and how the new mosquito spray can reduce preventable child illness and deaths.

In this process, as they talk and we listen, they are unknowingly defining the term "resilience." We are recording the voices of local leadership, who are using local products and resources to share effective local practices. The food produced is being fed to their children today, but the knowledge and skills the women are sharing will provide them with the resources and tools they need for tomorrow. And the most exciting thing about this "new development" is that the process of reducing child mortality is no longer delivered, but enabled, the only way that resilience really works.