I am confident that each of you has been asking himself, at least once, questions on his genetic roots. Why do I look the way I do? Where did my gene pool originate? If you have, then you will be interested in the story I am about to tell you and in what I believe to be one of the most intriguing scientific projects of all times. Skeptical? Allow me a few more paragraphs to convince you.

Evolution is one of those topics, which could entertain me for hours. I deal with the evolution of enzymes and proteins at a molecular level every day, but unfortunately, I am far less involved in conversations concerning human evolution. Nevertheless, a few months ago a friend introduced me to the Genographic project (by National Geographic). It simply blew me away. But what is it? And how does it differ from other scientific projects?

This not-for-profit project was launched by the renowned population scientist Dr Spencer Wells in 2005. Dr Wells leads a group of scientist on his global quest to shed light on our common genetic journey, answering fundamental questions such us: "Where did we originate?" "How did we come to populate Earth?" 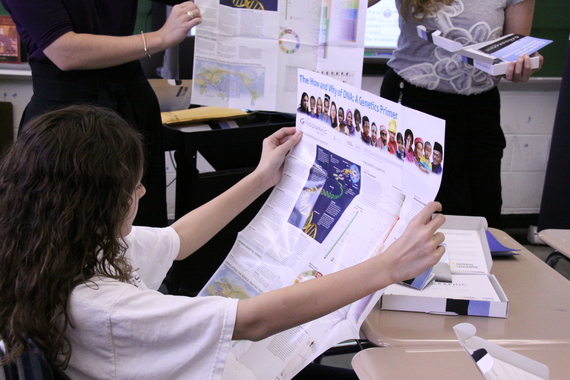 The Genographic team base their work on the observation that our genetic information, stored in the form of a code in our cells (our DNA), is passed down from generation to generation. This is the way in which we inherit our traits from our parents. The way the information is transferred is quite complex because, during the process, the parental code undergoes some random shuffling, making it difficult to track its origins backward. However, there are parts of the genetic code that are passed on as they are, without shuffling: the DNA contained in the Y chromosome for the male and the mitochondrial DNA for the female: these are the parts of the codes that the scientists in the project are interested in studying. Furthermore, every time that the parental information is given to the next generation, some "typos" (mistakes under the form of mutations, generally harmless), as Dr. Wells calls them, may occur in the code and, once they happen, they are transmitted unaltered to every future descendant. These "typos" become, therefore, excellent markers and can be tracked in the genome of every individual to reveal who his ancestors were. Thanks to the markers, scientists were able to create nothing less than a human family tree. Every single one of us is part of it and belongs to one particular branch.

However, this is not all. Historically, people close to each other had the tendency to share more of those genetic markers, than people living far away (i.e. it was more likely for them to find their mate among residents in the vicinity than in distant lands). Over the time, this created what Dr. Wells refers to as "regional patterns of genetic variations." These similarities allow also to track the migratory paths of everyone's ancestors: where did my story begin and how did I get to where I am today? Which populations am I more closely related to?

There is something else which makes this project even more peculiar. Scientists are often seen as isolated lab-rats, closed in their high-tech facilities, playing with the destiny of humanity Pinky and the Brain-style (by the way, if you do not know what I am speaking about, check out this old animated TV series: it is hilarious!).

The team working on the Genographic project are proving this stereotype very wrong. In fact, they could not have advanced their experiments if it was not for the help of the public. To participate is easy. For a modest amount of money (a portion of which help fund ongoing research and the Genographic Legacy Fund in supports of community-led indigenous conservation and revitalization projects around the world), National Geographic will send you a kit containing everything you need to perform a cheek swab that allows you to submit a sample of your DNA to their laboratory, quickly and pain-free. While waiting for the tests to be completed, you will receive a password to access your personal portal where the results will be posted a few weeks later. Very exciting!

To this day, almost three-quarter of a million people participated in the project, myself included. While there was no surprise about my South European descent, it was captivating to find out that my DNA carries markers typical of people coming from Great Britain and Ireland, Asia Minor, Eastern Europe and the Jewish Diaspora. The results are illuminating as they also show a plausible migration pathway my ancestors are likely to have followed. 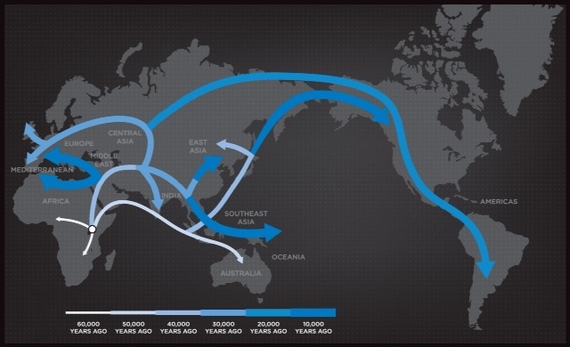 The Genographic project is further confirmation that "the origin of our species lies in Africa." In fact, humanity has spent the majority of its time on Earth there! We then migrated taking different routes and populating the globe through "a journey that is written in our DNA."

Not only this project brings us several steps closer to understanding the eternal mystery of life, but it gives us one great occasion to remember that, no matter the color of our skin, the shape of our eyes, how curly, straight, light or dark our hair is, we all come from one same place on Earth, we are all the product of the same four-digit genetic code. In my opinion, there is no better time than today to make once again treasure of this crucial information!

Scientist, writer and actress (at times)