By Sam Cage and Tsvetelia Tsolova

Prime Minister Boiko Borisov, a former bodyguard who swept to power in 2009 on pledges to root out corruption and raise living standards in the European Union's poorest member, now faces a tough task to prop up eroding support ahead of a probable early election.

Wage and pension freezes and tax hikes have bitten deep in a country where living standards are less than half the EU average and tens of thousands of Bulgarians have rallied in protests that have turned violent, chanting "Mafia" and "Resign".

On Tuesday, 11 people were hospitalised - including one man bleeding heavily from the head - and 11 arrested after protesters threw flares at police, who fought demonstrators with shields and truncheons.

"I will not participate in a government under which police are beating people," Borisov, who began his career guarding the Black Sea state's communist dictator Todor Zhivkov, said as he announced his resignation on Wednesday.

Parliament is expected to accept the resignation later in the day.

The spark for the protests was high electricity bills, after the government raised prices by 13 percent last July. But it quickly spilled over into wider frustration with Borisov's domineering manner and unpredictable decision making.

The prime minister made sacrifices in an attempt to cling on, sacking his finance minister, cutting power prices and risking a diplomatic row with the Czech Republic by punishing foreign-owned companies, a move that conflicted with EU norms on protection of investors and due process.

Borisov's rightist GERB party is the dominant faction in parliament but will not take part in talks to form a new government, Interior Minister Tsvetan Tsvetanov said, indicating that an election planned for July will now be held early.

"He made my day," student Borislav Hadzhiev, 21, in central Sofia said, commenting on Borisov's resignation. "The truth is that we're living in an extremely poor country."

GERB's popularity has held up well and it still leads, just, in the polls, largely because budget cutbacks have been relatively mild compared with those in many other European countries. Salaries and pensions were frozen rather than cut.

But the last opinion poll, taken before protests grew last weekend already showed the opposition Socialists were nearly tied with the ruling party and analysts said the protests had boosted the Socialists' chances.

Unemployment in the country of 7.3 million is far from the highs hit in the decade after the end of communism but remains at 11.9 percent and average salaries are stuck at around 800 levs ($550) a month.

Millions have emigrated in search of a better life, leaving swathes of the country depopulated and little hope for those who remain.

The measures announced this week has also put the country on a collision course with the EU and financial investors without easing the tension at home.

Czech Prime Minister Petr Necas demanded an explanation from Bulgaria and accused it of "politicising" the power sector by threatening to revoke the electricity distribution licence of central Europe's largest listed company CEZ, 70 percent of which is owned by the Czech state.

There have also been fines for another Czech company, Energo-Pro and Austria's EVN.

The precedent is unlikely to encourage other foreign investors, who already have to navigate complicated bureaucracy and widespread corruption and organised crime if they want to take advantage of Bulgaria's 16-percent flat tax rate.

"The resignation is the only responsible move," said Kantcho Stoychev, an analyst with pollster Gallup International. "It also gives Borisov some legitimacy to stay in political life in the future, despite the violent police actions last night." 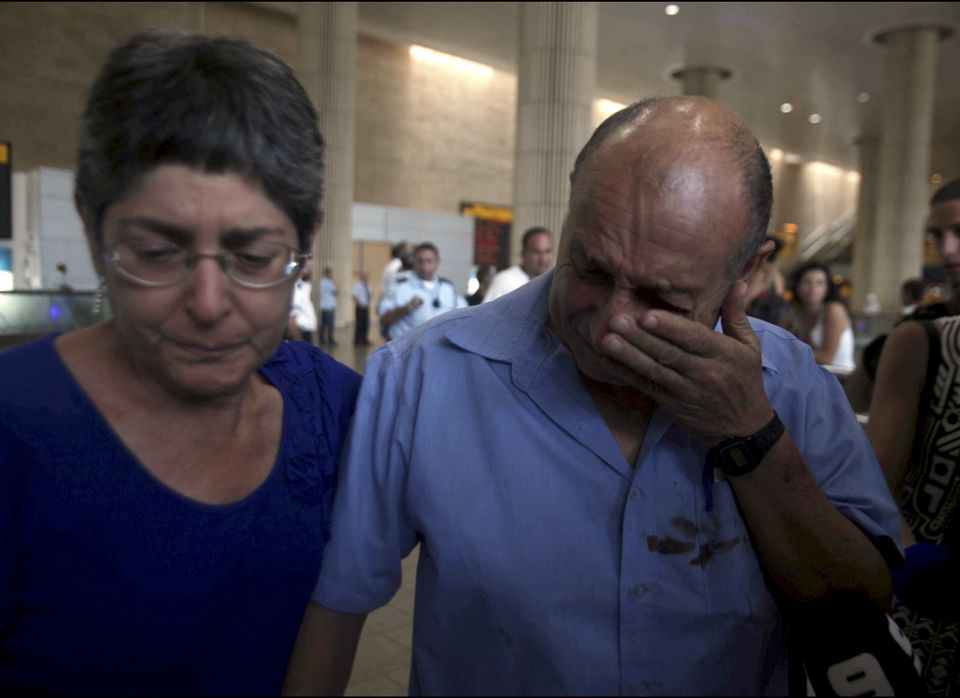 1 / 28
A Israeli survivor from a bombing in Bulgaria that killed seven people on Wednesday, cries as he arrives at the Ben Gurion airport in Tel Aviv, Israel, Thursday, July, 19, 2012. (AP Photo/Dan Balilty)
AP