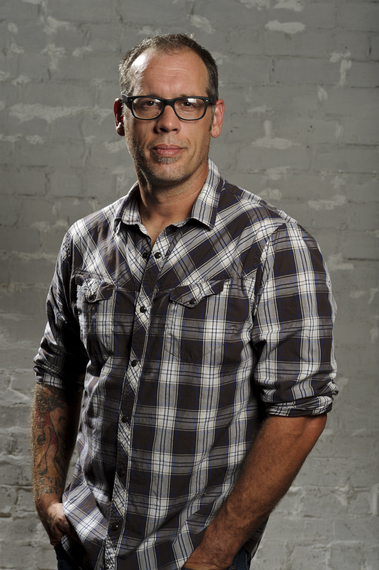 Brian Panowich is a firefighter and former musician. As an army brat, he grew up in Europe until the family settled in East Georgia. His debut novel, Bull Mountain, has received extensive praise from James Ellroy, C.J. Box, Wiley Cash, and John Connolly, among others.

Bull Mountain is set in the backwoods Georgia hills and spans the decades between the 1940s and today. This story of multigenerational crime and retribution is told from multiple points of view; and the acts of vengeance that have kept the Burroughs clan in complete control of the surrounding community are described in rich detail.

This is your first published novel. How and when did you decide to become a writer?
When I was a kid, I wanted to write comic books. I was a junkie for them. My father was a big reader and there were always books around the house. As I got older, I realized writing comic books wouldn't attract women (Laughter), so I forgot about it. In college, I studied journalism. After that, I spent 15 years playing music--everything from punk rock to Southern country--in a band. Once I got married and we had a baby girl, the music business, with all its road-trips, ended for me. We settled in Georgia, and I became a fireman.

I needed a creative outlet of some sort, so I started writing again. I wrote short stories, and some were published in journals. A couple of them caught the attention of Nat Sobel, an agent in New York. He asked if I'd written a novel; I hadn't, but he said if I ever wrote one, to give him a call. It took me a year to write this novel, and I wasn't even sure he'd remember me when I called. But, he did. He loved the book, and when it was completed, he sold it in a month. It's been a whirlwind experience. What's happened to me just doesn't happen. It seems to have fallen into my lap.

If you had to describe Bull Mountain in one or two sentences, what would you say?
It's primarily a family saga about Southern people and the way they do things, as opposed to the rest of the world.

Your portrayal of various members of the Burroughs clan is quite compelling. Clayton Burroughs is certainly the most interesting. How would you describe his conflicts and challenges?
He's clearly tormented. He's come to terms with the heinous crimes committed by his family. As the county sheriff, he knows he's not following in his father's or older brother's footsteps. His choice doesn't fit well with a family whose crime history goes back for generations. He's haunted by the fact he's turned his back on his family. That's his primary conflict and he must deal with it.

Bull Mountain describes the evolution from moonshine production to raising marijuana, and now to the production of methamphetamine. Tell us about your research.
West Virginia and Kentucky were known for moonshine production. It took a great deal of intelligence for the guys in those north Georgia foothills to stay off the police radar.

Once Prohibition was over, all the elements were in place for illegal drug production. Liquor would no longer make money, so they had to progress to a more profitable product.

Today, those hills are a gateway to drugs everywhere else.

Actually, most of my research came from folks living in north Georgia. I don't know how much of what they told me is true, and for sure, I dramatized quite a bit of it.

Bull Mountain has been described as crime fiction, literary fiction, and as Southern noir. How would you characterize it?
I wanted to write an interesting story dealing with a Southern family. I didn't set out to write a crime novel, but since I'm a huge Elmore Leonard fan, I think his influence was somewhere in the back of my mind to do that. I just let the characters take the story where they did. I love being told I've written in these various genres, but I honestly don't have any idea in which genre Bull Mountain belongs. To me, it's like The Godfather, a family saga, more than anything else. The exact nature of the Corleone enterprise isn't nearly as interesting as the relationship between the family members.

John Connolly is one of my literary heroes; anything he says is gold to me, so when he called Bull Mountain 'Hillbilly noir,' that's fine with me.

You're a full-time firefighter, husband, and father. How do you find time to write?
I can't write unless I'm at the fire station. My shifts are twenty four hours "on," and forty eight "off." My time at the fire house is almost like a day off compared to being at home with four young children. Nothing much gets accomplished at home outside of caring for the kids.

When I set out to write this book, I wrote every third day during my shift at work. So, if there wasn't something burning in the county, I was holed up in a closet, writing. My co-workers were one-hundred percent behind me and said, 'Go for it.'

What do you feel is the most important lesson you've learned about writing?
A book is never done, never finished. When you think it's done; it's not. Eventually, I had to learn to let go of the manuscript. When I turned it into my agent, I thought it was finished, but he had some significant ideas to improve it. I'm very used to doing things on my own, and had to learn to trust other people and let them have a hand in my work to make it better.

What, if anything, keeps you awake at night?
The accolades I've received keep me up at night. To have a literary journal like Booklist compare me to John Steinbeck is surreal and frightening.

Are you worried the level of expectation has been raised too high?
Yes. How could something I did every third day at the firehouse be compared to the work of an author who's an American icon? I'm just worried when the book hits the shelves, people might be disappointed. There's an awful lot to live up to. It spooks me. There's a lot of pressure and that keeps me up at night.