We kind of hate to tell you this, but you know the bully sticks your dog is always chewing on? They're bull penises.

"Usually if it's got 'bully' in the name, it has a penis as one of the ingredients," Dan Goodnow, founder of Natural Dog Company, told The Huffington Post from the Global Pet Expo in Orlando.

When used as ingredients in dog treats, animal byproducts like trachea, lung and gullet are candidly marked on Natural Dog Company's packaging, as they are on many competitors' products. But bully sticks are usually called just that, leading, as one 2013 Tufts University poll discovered, to confusion even among veterinarians about what a bully stick really is: just sixty-two percent of vets correctly identified them as penises, compared to 44 percent of the general public.

In other words, lots of people don't even know that their dogs are eating a lot of bull penises. Experts say it's usually fine in terms of health, as long as dogs don't eat too many of the high-calorie sticks too often, but we had other lingering questions for Goodnow:

The Huffington Post: So, bull penises. Which products are actually made out of bull penises?

There are a number of companies that make bully sticks. We were definitely not the first, and I'm sure we won't be the last.

How many bull penises do you think you buy and process a year?

It's hard to say, as they typically are cut from their full cane length down to their 6" and 12" chewing size. But somewhere in the hundreds of thousands, I would guess.

Since so many of your products are labeled by body part instead of more euphemistically, how come bully sticks are still called bully sticks instead of bull penis sticks?

It really depends on the product and the associated ick factor. Sometimes people aren't turned off by the body part name (i.e. trachea or backstrap), and sometimes they are (i.e. penis or bladder or esophagus).

We try to come up with a fun name when we can, so that people can try the product with their dogs without being embarrassed to ask for it by name at their local pet store.

How does a bull penis go from being on the bull, to becoming a dog chew. What are the steps?

When the cattle are processed for human consumption, the pizzle is gathered along with other parts that will eventually become dog treats.

The pizzles are then cleaned, stretched and dried in an oven and then cut to size. 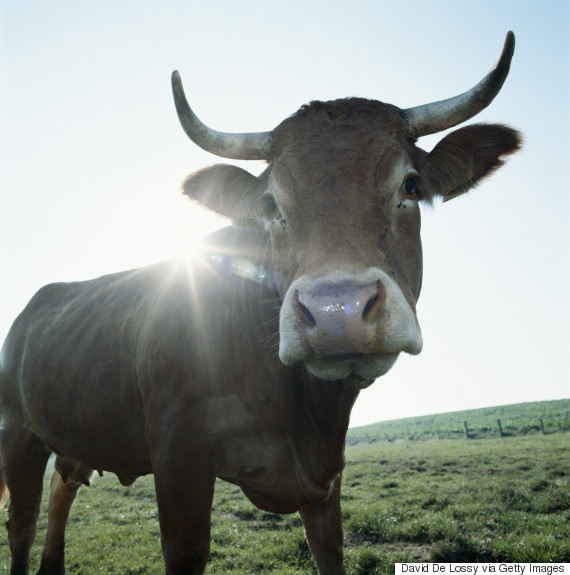 How did you get into the bull penis business?

I started the company 5 years ago. I had just gotten married and my wife and I gave each other a dog, Tuesday, as a wedding gift to one another. (We had gotten Stella, our other dog when we moved in together 4 years before).

Jenn wanted a dog with spunk -- and that's exactly the kind of dog we got. I was running another company at the time from my house when Tuesday started destroying everything in sight. Toys, toilet paper, magazines and eventually the flat part of the wall in my office.

I needed to find something to keep her busy, and found bully sticks. When she started working on these, she finally stopped shredding everything else in the house. I became a believer and started selling them myself.

Our primary products are bully sticks, but we also sell other body parts including beef trachea, beef gullets, beef tendons beef tripe, cow ears along with other single ingredient chews like deer and elk antlers, sweet potato chips, lamb lungs and pig ears. Almost all of our products are meat-based, single ingredients dog chews that are sourced from free range cattle.

Were you surprised, when you first got into this business, to find out what dog chews are made of?

I was shocked initially, but this shock was quickly overtaken by the thrill of finding something that my dog loved that took her a long time to chew through. Then I just got over it!

Where do most of the bull penises come from?

In the U.S., it's very hard to find cattle that are are raised outside of feedlots. We do carry some U.S. pizzle products for our customers that are really interested in carrying a U.S.-only product line in their stores, but this is not our main focus and the quality is not always the same as South American pizzles.

Most bully sticks are sourced from the USA, South America and some from India -- these are typically water buffalo pizzles rather than beef pizzles.

Does working in this business affect how you think of your own food?

What would you say to squeamish people who are kind of grossed out upon discovering that their dogs are chewing on bull penises?

I think it depends on the person. Sometimes some people are grossed out initially, but then they see how much their dog loves it and they don't care anymore.

Sometimes, there are people out there that actually get excited when they find out. It must be something to do with animosity towards an ex-husband or ex-boyfriend that they want to get back at.

This interview has been edited for length. Get in touch at arin.greenwood@huffingtonpost.com with your unexpected facts about bull penises, or, more likely, other animal stories.