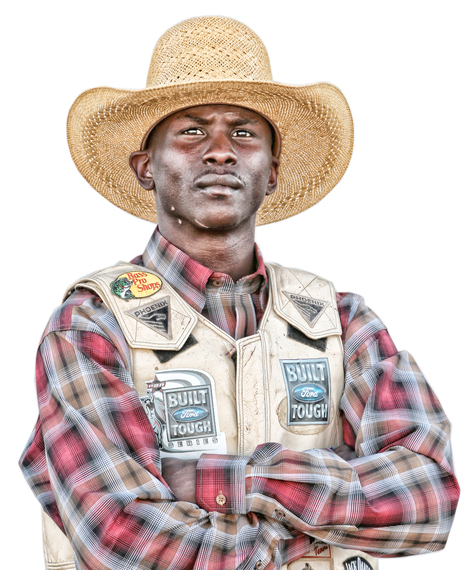 Fame has been a long time coming for bull rider Neil Holmes. Ten years, to be exact.

But after a stunning debut in the Professional Bull Riders "Built Ford Tough" tour in Laughlin, NV earlier this month, Neil Holmes, 28, is primed to follow in the footsteps of Fred Whitfield, Charlie Sampson and other African American champions who roped and bucked their way into the history books.

Yes, you did just see "African American" and "rodeo" in the same sentence. You shouldn't be shocked.

As Holmes himself said, "There have always been African American cowboys throughout the history of rodeo and the western culture."

But while Holmes would be the first to doff his hat to those who rode before, he's blazing a different trail.

"I really don't consider myself a cowboy," he explained. "To me, a cowboy is someone that is actually farming and ranching. Me, myself, I feel that I'm just a bull rider with the best job in the world. I don't wear my cowboy hat and boots everyday like some of the guys, like Douglas [Duncan] and LJ [Jenkins]. Those are true cowboys."

In fact, asked about his heroes, Holmes steps out of the bull riding world completely.

"I respect Fred and Charlie for overcoming the adversity they had to go through and still become world champions," he said. "But, my hero would be outside the arena. My mother has made me the man, the person, that I am today. "

For those who wonder what it's like to be an African American man in what is perceived -- wrongly -- to be a "white" sport, again, Holmes characteristically doesn't mince words.

He admits that "unfortunately, ignorance still exists." But bull riders, he says, are "a very strong knit family and that's how we treat one another. So I'm always comfortable and at home when around the other riders."

These days, he's getting comfortable with the best of the best. After winning a chance to move up to the big leagues by winning the Touring Pro Division in Fredericksburg, Texas, Holmes stunned the fans and fellow riders in Laughlin by riding two of three decidedly "rank" (tough) bulls.

Those two wild rides landed him right at the top of the leaderboard, where he remained through most of the second round -- quite an accomplishment for a debut appearance.

How did Holmes feel up the in the "rarefied" air with the top 35 riders in the PBR?

"It was amazing, but not surprising," he said. "No words can really express it."

And yet, he insists he prepared for Laughlin no differently than he would for any upcoming event.

"I didn't really work on anything in particular for the event," he said. "I just wanted to make sure that I was mentally prepared since I was stepping up to a bigger stage."

His third ride didn't go as well. But the PBR was still impressed enough to give him a chance to compete for points in three upcoming events in Oakland, Biloxi and Allentown. They think he can win enough points to stay in that top 35, an elite group of legendary bull riders who tour the country year-round.

And Holmes is ready for the challenge.

"I'm extremely grateful to have another opportunity," he said. "To anyone that may looking forward to my next rides, I'm not sure what to expect myself, but I can guarantee I'll give it 110%."

Those next rides are a chance to add his name to the list of legendary African American stars who beat the odds. And to other young African Americans hoping to follow in his footsteps, he has a "welcome" message that could lead them to success both in the arena and far beyond.

"To any kid, regardless of their race, I would say, chase your dreams," he said. "Whether it's bull riding, rodeo, or whatever it may be, don't limit yourself or your options. It doesn't matter where you come from or have been in life."

Sounds like the PBR really has found themselves a winner.